AOC’s Met Gala dress was tone-deaf, but what do the surrounding arguments reveal about NYU students’ own ignorance regarding class and privilege? 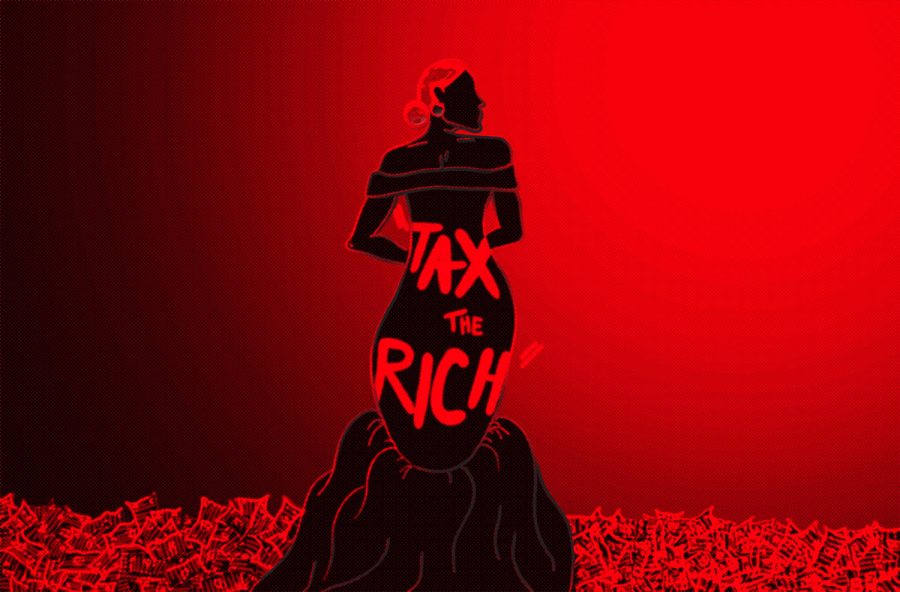 Alexandria Ocasio-Cortez’s Met Gala dress was seen as tone-deaf by many. The controversy raises the question of whether or not NYU students are ignorant of their own class privilege. (Illustration by Bridget Harshman)

On the evening of Sept. 13, the Met Gala was held at the Metropolitan Museum of Art in New York City. Among the many distinguished guests were acclaimed actors, renowned artists, famous TikTokers, and — to the distaste of many — progressive politician Alexandria Ocasio-Cortez. AOC appeared on the red carpet in a white Brother Vellies gown designed by Aurora James, with the message “tax the rich” painted in red. When asked about her intent, AOC said, “it’s really about having a real conversation about fairness and equity in our system.”

On social media, people were already pointing out the issues in AOC’s attempt at social commentary, arguing that the gesture was hypocritical and performative. How can you hold the rich accountable while making small talk at an event that charges roughly $35,000 per ticket? Moreover, how does simply wearing a dress to the Met Gala equate to having a real conversation? Further controversy arose when it was discovered that James owed tax debt in multiple states. Defenders of AOC brought to mention, however, that she neither paid for her ticket, nor her dress, indicating that she did not have the ability to splurge her own money on the event like many rich celebrities did. They even referenced her yearly salary as a congresswoman — $174,000 — to prove her class status.

This revived a long-had debate on Twitter. People began, once again, arguing who should and should not be considered rich. Twitter user and writer Morgan Sung tweeted her thoughts: “aoc’s dress was corny but some of you need to understand the difference between a $174,000 annual salary and jeff bezos.”

While AOC and wealthier NYU students with similar income levels might not be as wealthy as billionaire Jeff Bezos, it is still important to recognize that they do not fit under the markers of working or middle class. As of 2020, the real median income of an individual within the US sits at just over $35,000 per year. Only about 8% of American households earn an income of $150,000-$199,999. Using a Pew Research Center calculator which calculates class status based on region, household size and income, AOC’s individual earnings alone qualify her as being within the upper-income tier. In her own New York City congressional district, District 14, the per capita income sits at $30,468 and the median household income sits at $66,749. AOC is earning almost three to six times those values. While $100,000 per year might be a difficult salary to live on for an average family in New York City, it is still a privileged position to hold. Many families in the city don’t come close to that yearly income. As a single person, it is indubitable that a $174,000 salary gives you class privilege.

No one is insisting that a family that makes $150,000 a year belongs to the same group of people like Jeff Bezos, Warren Buffett or Bill Gates. What working class people are demanding is an acknowledgment and understanding of what truly constitutes the plight of the American working class. A family that makes $150,000 a year can experience a vastly different quality of life depending upon its location, but they will still be able to afford housing and health insurance while maintaining a lifestyle relatively free of extreme economic sacrifice. The majority of the American working class cannot say the same. To many, $150,000 is a life-changing amount of money. It is ignorant and disrespectful to continue to speak over them and insist that $150,000 is not as much money as one presumes.

AOC has no current claim to the working-class identity. Her actions reveal a growing disconnect between her publicized politics and her reality — a situation mirrored by many students at our own institution. Often we will see our peers spin stories about how broke they are only to be seen partying at expensive bars and shopping at designer boutiques. Many of our peers pride themselves on their progressive politics, yet fail to acknowledge their own class privilege, therefore refusing to use that privilege for the betterment of those who don’t have it. This performance — a phenomenon that extends to politicians, celebrities and our own friends — needs to end.