Opinion: Let’s include voices of color into the sustainability movement 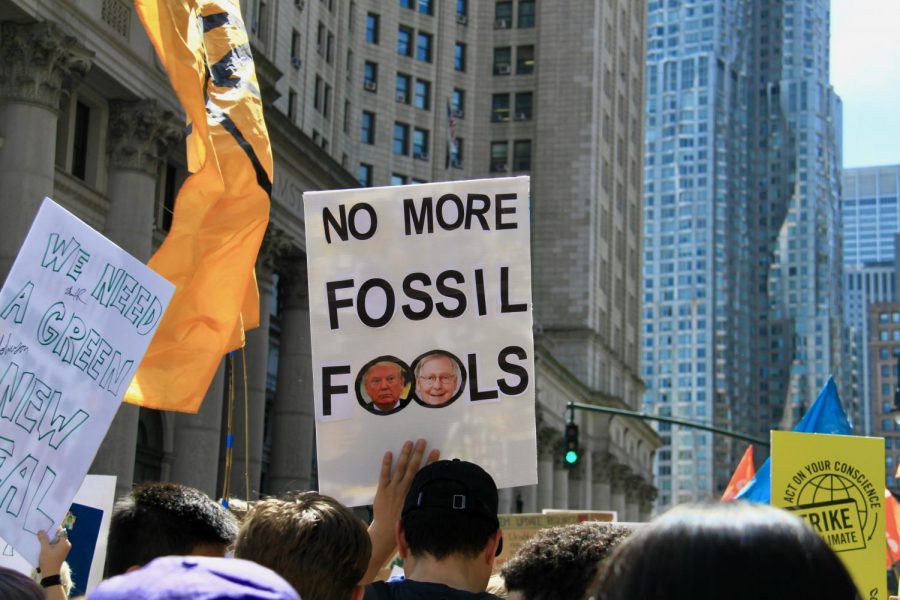 Protestors march in Manhattan as part of a climate strike. Sustainability movements must recognize the need for intersectionality. (Staff Photo by Alexandra Chan)

For the most part, Earth Day inspires people to post on social media with calls to action about the climate, the environment and how we, as individuals, can combat these changes. Unfortunately, the face of this green movement is largely led by the white upper-middle class, which focuses on individual action and behavior when it comes to climate justice.

In fact, a report by Green 2.0, an independent advocacy campaign that tracks racial and gender diversity within the environmental movement, found that the largest nonprofit environmental organizations lack the important perspectives of marginalized communities. The report found on average that these organizations hired eight women and six people of color to their staff in the last three years.

When the demographics of environmentalism are disproportionately white, climate justice is often conveyed as an individual problem solved by metal straws and veganism. Since white people do not face the brunt of the consequences, they do not experience the same environmental challenges that communities of color face. Environmentalism must focus on the systemic issues rooted in community neglect and environmental racism.

Furthermore, the discussion of sustainability is now catered toward what citizens can do at an individual level. Articles around Earth Day advocating for sustainable living will urge the construction of rooftop solar and battery storage, changing light bulbs to LEDs, purchasing a programmable thermostat or composting. However, these common suggestions tend to be tone-deaf to inaccessible to simply elitist. Telling people to focus on conservation on an individual level is not feasible in the long term. According to a 2017 report from the Climate Accountability Institute, 100 companies create 70% of the world’s greenhouse gas emissions.

Richard Heede, the co-founder and co-director of the Climate Accountability Institute and producer of the Carbon Majors report, spoke to Vox about what the common person’s impact on the environment looks like.

“You can measure a person’s impact, but there would be a lot of digits behind the zero in terms of percent of global emissions attributable to or savable by an individual,” he said. “We’re talking about 7 billion people on the planet.”

This is not to say that everyone should throw out their metal straws and reusable grocery bags. However, it does shed light on how the sustainability movement should recenter its focus from improving the environment on a personal level to what individuals can do for their communities.

While we see posts urging about how we must leave the Earth better off for our children and grandchildren, those in low-income areas and housing face the effects of environmental injustice right now. We must value the perspectives of people of color in order to rebuild and restructure local systems that harm the Earth.

One prime example of this is when U.S. Rep Alexandria Ocasio-Cortez hosted an Earth Day event in Astoria Park. She spoke about her Green New Deal climate change resolution, but also brought a more local issue to the attention of New Yorkers. Ocasio-Cortez, D-N.Y., called to block an Astoria power plant from using natural gas from fracking as it would “allow our water to be compromised … our air to be compromised.” After rallies calling on Congress members and New York state leaders to reject the power plant’s proposed plans for the site, Ocasio-Cortez and eight members of New York’s congressional delegation wrote to Gov. Andrew Cuomo about this issue. This event demonstrates how local activism is a productive and meaningful way to improve the environmental safety and health of an entire borough.

Brooklyn is also a center of many climate crises. If the energy and focus is put toward Brooklyn, this can improve the lives of people through measurable, productive and systemic change. National Grid plans to start construction of a pipeline in Brooklyn, but groups like North Brooklyn Extinction Rebellion fighting the plan want “to end all construction of fossil fuel infrastructure to reduce carbon and other emissions that lead to climate change and pollute the local air.”

It may seem as though the only choices in the sustainability movement are either to take an individual approach to promote climate justice or to leave it to the hands of elected officials to enact national change. There is a middle ground in the movement. The discourse occurring in Queens and Brooklyn may take place in corners of the city, but if the decisions of big businesses and fossil fuel companies are not held accountable by those who live in low-income communities, millions of people in these boroughs will be worse off as a result.