The Dangers of Love in the Age of Dating Apps

Dating apps are deeply addictive, exploitative and dehumanizing — and there’s no way to escape them. 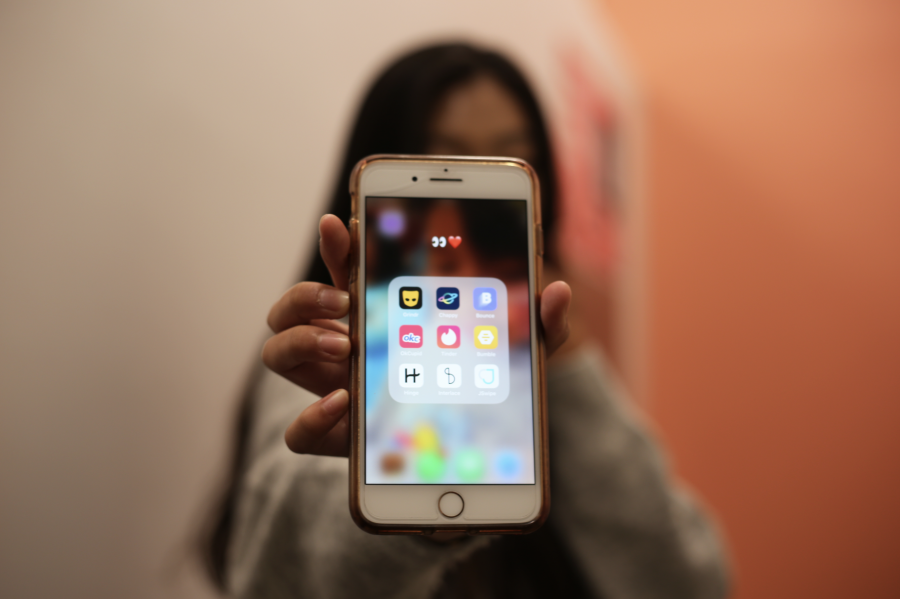 A student holds their phone, with dating apps displayed on the screen. (Staff Photo by Marva Shi)

Out of all the events that occurred on my 18th birthday, one stands out: signing up for Tinder. While others may have bought a lottery ticket to celebrate their newfound freedom, my own rite of passage was creating an account on the app that promised to find me love. Up until my 18th, I was deeply envious of all of my friends who were of legal age and able to swipe their way to love. I couldn’t wait until I could do the same, motivated by the stories my friends told me about their own dates and the fun things they did with the interesting people they otherwise never would have met. I had even chosen the pictures I’d use for my profile and thought of the witty bio I’d include long before my birthday actually occurred.

A year and a half has passed since that birthday — a time during which I’ve grown increasingly disillusioned by the apps I was so eager to sign up for. While I was initially in awe of the endless pool of potential dates and entranced by the possibility of them ending my loneliness, I quickly found that using Tinder and Bumble encouraged disconnection rather than promote the connection they’d advertised. With thousands of people to swipe on in New York City, I was motivated to swipe through as quickly as possible, reducing their individuality into a swipe to the right or to the left based on a glance that often lasted a few milliseconds. Searching for love became a deeply dehumanizing chore — and a highly addictive one.

Parallels can be drawn to psychology studies done on rats in the 1950s. When a rat was placed in a box with a button that unpredictably rewarded it with food, the rat was quickly trained to compulsively press the button, as it never knew when food would be dispensed. Gambling and slot machines work in the same manner, as players never know when they’ll get lucky —  which keeps them playing for longer periods of time and spending more money. Dating apps are addictive in the same manner, as users never know which swipe will lead to a successful match.

Dating apps are exploitative: not only are they designed to be addictive, but their owners profit off of this addiction through ads and subscriptions. Users can pay to see who’s swiped right on them on Tinder and Bumble so that they can swipe on prospective suitors quicker, or even pay to have their profile featured more prominently to other users for a few hours. Even Hinge, which brands itself as the anti-swiping dating app that’s “designed to be deleted,” offers a paid subscription that enables users to like (instead of swipe) on an unlimited amount of profiles. Ironically, Facebook — perhaps the most exploitative corporation of our time — copied many of Hinge’s features for their own dating app announced last week.

Beyond just the addictive and exploitative aspects of dating apps, they’ve also seriously changed what it means to date in the first place. By promoting the myth that everyone needs to be in a relationship, much like how the jewelry industry revitalized the sale of diamonds in the 1940s by marketing them in association with love and romance, dating apps have overtaken society by becoming the new norm, even if they can be unhealthy. In this system, abstaining from using dating apps would be just as weird as not giving your fiance an engagement ring. Recognizing this problematic system, new apps are attempting to solve some of these issues. Bounce, for instance, only lets users swipe during certain hours to go on a date at a predetermined time, while on Interlace, profiles consist of a video answering three questions, and users can only communicate with their matches by sending videos in an attempt to make online dating a bit more humanizing.

But it seems as if all dating apps still perpetuate loneliness — they draw us in with their claims of easing this, only to keep us hooked on swiping for love forever, feeling lonelier and lonelier. That’s what they were designed to do. This artificial sensation of loneliness is intentional: it enables companies to profit off of our alienation while also making it impossible to resist, both from a psychological perspective and a cultural one. Admittedly, I’ve been hooked to this system of compulsive affinity and have tried escaping it many times, sometimes for days and sometimes for weeks, but I keep finding myself using these loveless apps again. I know that they were designed to be addictive and that I can delete them with a tap, but that doesn’t make the choice to do so any easier — because how else will I find love?