NYU has partnered with the Korea Advanced Institute of Science and Technology to launch collaborative research initiatives, an engineering program, study away opportunities and, by 2025, a joint campus in New York City. 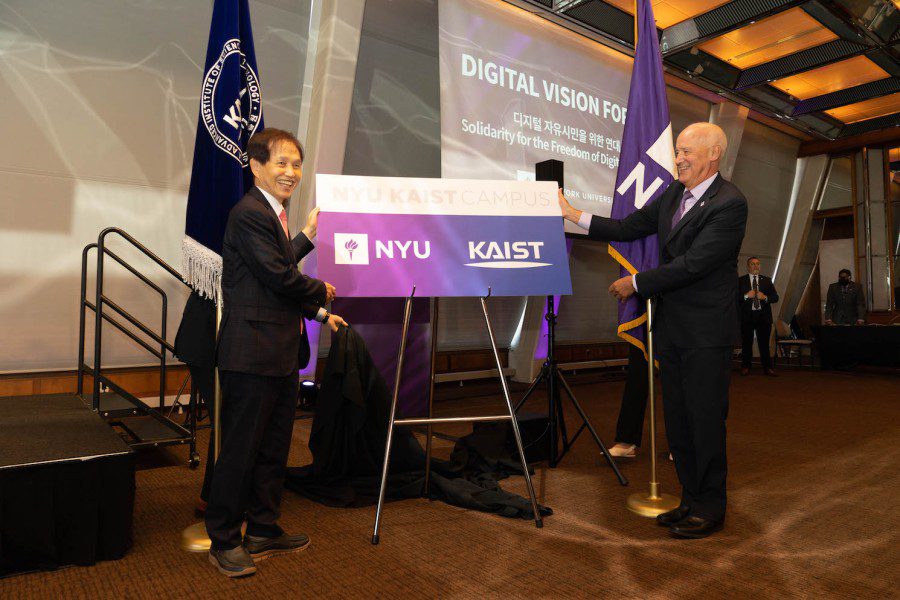 At the event, Yoon spoke to a crowd of around 100 people gathered in the Kimmel Center for University Life about the importance of the digital age and advancements in technology in an increasingly globalized world. He emphasized that technology permeates all parts of life and has the ability to strengthen democracy, urging people to embrace the digital transformation.

“If digital technologies are governed not by freedom, solidarity and human rights — the universal values of humanity — but by might and self-interest, they themselves will become a controlling power and encroach upon freedom of humanity,” Yoon said.

NYU and KAIST are set to begin research collaborations in the coming days, and the universities hope to establish a joint undergraduate engineering program, which will include study abroad opportunities in South Korea and the United States. The KAIST offices in New York City will be located at One MetroTech Center, near the Tandon School of Engineering.

Hamilton spoke about the potential impact of the partnership on entrepreneurship, research and educational innovation.

“We look forward to many years of perfect harmony between NYU and KAIST and we could not be more excited than we are today to sign and to celebrate this partnership,” Hamilton said. “Thank you for being here, for being part of this exciting afternoon. We look forward to the next months and years of a very productive collaboration.”

KAIST was founded in 1971 by the South Korean government and has campuses in Daejeon and Seoul. The institution was originally funded by the United States Agency for International Development, which contributed $6 million in loans to the university. KAIST’s curriculum specializes in science, technology and entrepreneurship, and it was named the 10th most innovative university in the world by Reuters in 2021.

Adams thanked the Korean delegation for this agreement — one that he said would build upon an already strong relationship between New York City and South Korea.

“Today we are committing to a dream partnership for the digital age,” Adams said. “Korea is known around the globe for their leadership in science and technology. New York City is home to the world’s most exciting startups, academic institutions, founders, and some of the best talent you can see in this country.”