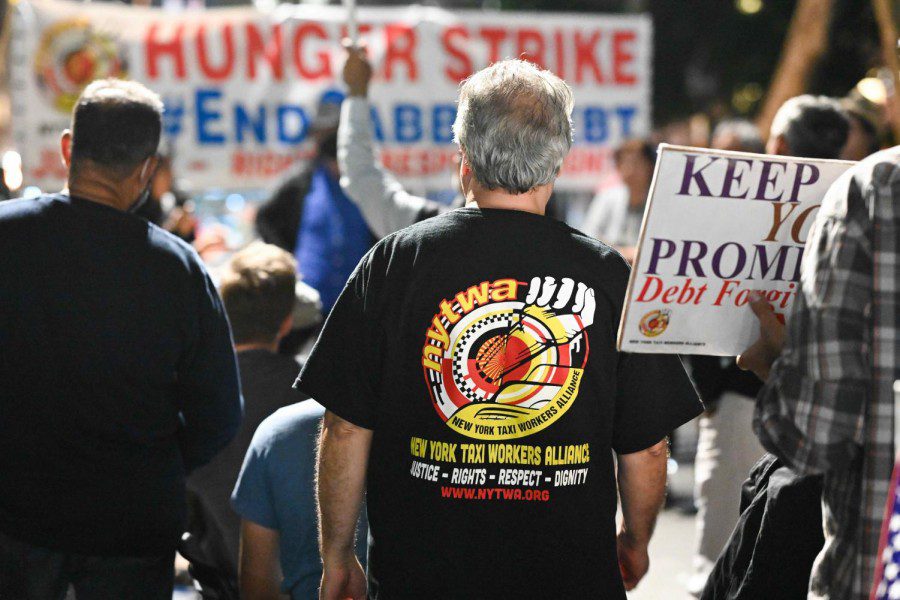 Members of the New York Taxi Workers Alliance at a protest for debt relief on Oct. 20, 2021. (Sirui Wu for WSN)

A city-backed debt relief guarantee won by New York taxi workers last November went into effect on Monday, Sept. 19, restructuring loans for thousands of drivers who have purchased taxi medallions, a permit required to drive an independent cab in the city. The plan will allow drivers to lower their monthly payments on medallion debt.

The New York Taxi Workers Alliance — a union comprised of more than 20,000 taxi, app-based and corporate car drivers — conducted a 46-day picket line and a 15-day hunger strike outside of New York City Hall last year. The protest concluded with a Nov. 3, 2021 agreement between the union, the city government, and Marblegate Asset Management, a private equity firm that finances taxi medallions.

Mayor Eric Adams and David Do, the chair and commissioner of the New York City Taxi and Limousine Commission, announced on Aug. 30 that the new agreement would go into effect on Sept. 19, allowing those who own medallions to begin the process of restructuring their loans immediately. The deal — which will establish a maximum cap of $200,000 on outstanding debt — is expected to impact 3,000 workers. NYTWA has also reported that monthly payments will be capped at $1,122.

The New York City TLC, the taxi regulatory agency that oversees more than 170,000 drivers, announced that around 900 drivers were registered for legal services appointments this week as a part of the closing week of the Taxi Medallion Owner Relief Program. The NYTWA posted photo updates throughout the day on Sept. 19, highlighting several taxi workers who had much of their debt relieved, with totals reaching several million dollars.

Jaslin Kaur, a former Queens City Council candidate who participated in NYTWA protests last fall, said that the cost of taxi medallions sent her family — several of whom are taxi workers — into debt. She said that her family’s immense debt forced her to drop out of college and incur student debt as well. Kaur added that she has been helping her family members apply for loan forgiveness through the New York City TLC.

“There’s a collective sense of relief, especially for families who owed close to half a million dollars in debt,” Kaur said. “However, as we face concurrent crises of rising rent and rising energy costs, an $1,100 monthly payment may still be a challenge for some. Regardless, this is a historic win, and I’m thankful for NYTWA in not only fighting so hard for this guarantee, but also calling members across the city to make sure nobody misses the deadlines for such a lifesaving program.”

Bhairavi Desai, the president of NYTWA, called the guarantee “ground-breaking” in a press release on Aug. 30. She thanked City Hall, the New York City TLC, the Mayor’s Office of Management and Budget, and Marblegate for the part they played in establishing the program. She also commended NYTWA members for the time and effort they put in during the strike and subsequent negotiations.

“I congratulate all of our union members who chose to organize, and not despair, and won back their lives,” Desai wrote. “Against the darkness of a crushing debt, their courage remained the light, and today, the triumph is fully theirs.”

Medallions have fluctuated in price severely since their inception in 1937, most notably in 2014 when ride-sharing services were first allowed to operate in the city. Prices of the medallions decreased quickly and dramatically at that time, pushing the medallion market to crash and leave the average driver with $500,000 in debt.

NYTWA’s hunger strike, which took place just outside of the Mayor’s office, was held in opposition of former Mayor Bill de Blasio’s 2021 Taxi Medallion Relief Program, as well as poor working conditions across the industry. Many workers are forced to work long hours at below minimum wage in attempts to pay off their crippling levels of medallion debt.

MD Islam, a taxi driver who has worked in New York City for more than a decade, told WSN that he spent $600,000 on a medallion in 2010 with the help of a loan. As of November 2021, he still had half a million dollars of debt left to pay off. In an attempt to cut his debt, he reported working between 50 and 60 hours per week.

CAS senior Karishma Chari participated in the hunger strike last fall, not eating for 52 hours in solidarity with the union and with taxi drivers across the city. Chari, who is studying public policy and is a campaign coordinator with the NYU chapter of the Young Democratic Socialists of America, does not have a direct link to taxi workers, but wanted to show her support for the drivers on the picket line. She said that the deal will begin to rectify the poor working conditions and debt-related stress that taxi workers and their family members have faced for years.

“I hope that like other union wins, this can set a precedent in the standard of how immigrant workers are to be treated from nail salon workers to street vendors, as so often these groups are flagged as easy targets to exploit to the point of unlivable conditions,” Chari said. “In actuality, these workers are the gears that keep the city moving and represent the symbols that make the city what it is.”