The British monarch’s sudden passing yesterday brought life to a standstill in the United Kingdom. 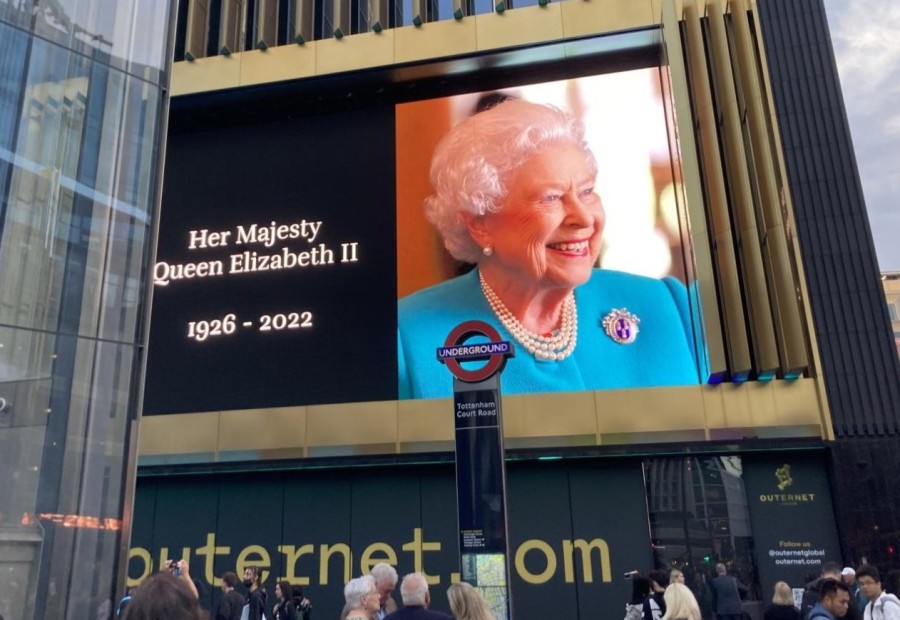 A billboard in London announcing the passing of Queen Elizabeth II. (Ryan Kawahara for WSN)

The announcement of Elizabeth’s death comes at a time of political transition in the United Kingdom, with the appointment of Prime Minister Liz Truss just this week. Elizabeth, who ascended to the throne 70 years ago, was a figure of stability for the country, having worked alongside 15 different British prime ministers.

Catherine Robson, the director of NYU London, sent an email to students following the news, saying that students will be updated about how her passing will affect classes and trips in the coming days.

“This is a time of great sadness for citizens of the U.K. and for members of the Commonwealth — whatever our politics or our thoughts about the institution of monarchy, we are all, I think, united in our respect for the queen’s life of duty and service, and we know that these feelings are shared by many others around the world,” Robson wrote in the email. “For now, I just wanted to write to mark this moment and to honour the sense of loss that so many of us are feeling.”

Steinhardt sophomore Lavinia Loria is currently studying in New York City, but her family lives near Windsor Castle — a royal residence in Windsor, England. She said that the royal family was a big part of her upbringing, adding that it was empowering to grow up and see a woman in a prominent position of power.

“I feel bad for the young girls growing up now who aren’t going to experience that,” Loria said. “We’re just always going to have masculinity and power. But at the same time, we do now have a British female prime minister, so maybe that is a good sign.”

The formal mourning period for the Queen started yesterday and will last 10 days, concluding with her funeral which will likely take place at Westminster Abbey on Sept. 19. Her son and heir, King Charles III, will be crowned in the coming months.

After the Queen’s death was announced, several students at NYU London attended the play “Agatha Christie’s The Mousetrap” at St. Martin’s Theatre in the city’s West End. The venue held a two-minute-long moment of silence and played the national anthem. Tisch junior Max Rosenblum attended the play and said he was curious as to how the mourning period might affect the city and the world.

“I’ve never really cared much about the Queen, but it’s really odd to be here during this time and watch what’s happening,” he said. “The next few weeks are going to be really interesting.”

Throughout the London Underground metro system, monitors displayed a graphic announcing the Queen’s death. Many popular entertainment venues among NYU students closed on Thursday night in order to pay respect. In front of the British Consulate General New York, flowers and handwritten messages addressed to the monarch were laid across the entryway throughout the evening.

After NYU London student Christian Downey heard about the monarch’s death on BBC News, he visited Buckingham Palace to join in mourning. He said the crowd held collective moments of silence and sang the British national anthem, with manying chanting “God save the Queen” repeatedly.

“I’m quite shocked,” he said. “While I knew that the Queen’s health was suffering, I didn’t think her death would be so sudden, especially while I’m studying abroad here.”