Salman Rushdie, a distinguished writer in residence at NYU’s Arthur L. Carter Journalism Institute, was taken to a hospital Friday morning after he was stabbed in the neck while delivering a lecture in western New York state. 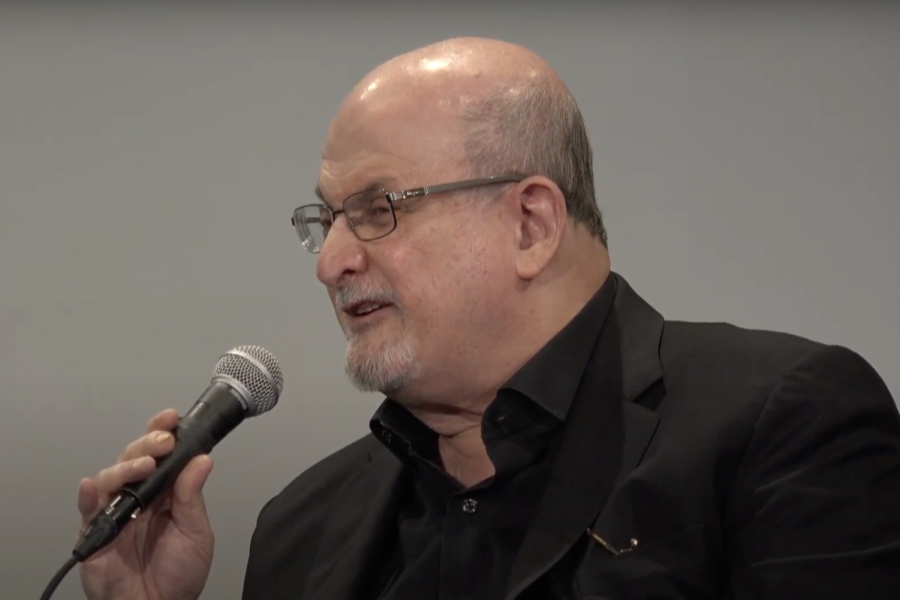 Salman Rushdie, renowned author and NYU faculty member, is in recovery after being stabbed about 10 times, including once in the neck, before delivering a lecture in western New York state on Friday. On Friday evening, his agent told The New York Times that “the news is not good,” explaining that Rushdie’s liver was damaged and that he might lose an eye. On Sunday, his agent reported that Rushdie was on “the road to recovery,” and had been taken off the ventilator that he was placed on the previous day.

Rushdie’s agent had previously reported to The New York Times that the author was undergoing surgery during the early afternoon on Friday. In a statement issued Saturday morning, NYU president Andrew Hamilton called on the university community to come together to support Rushdie and continue to uphold freedom of expression.

“Notwithstanding the threats against him, he has continued to write and to speak publicly; this is part of the reason he is so widely respected,” Hamilton wrote. “And that’s what makes yesterday’s incident so much more egregious than the shocking act of violence at its core — it was an attack on ideas, on institutions that cherish ideas, on intellectual exchange. It strikes right at the heart of the values we hold so dear.”

Rushdie was being introduced on stage at the nonprofit Chautauqua Institution — a gated community in Chautauqua, New York, that offers literary and arts events — where he was scheduled to speak as a part of an ongoing lecture series. At around 10:45 a.m., 24-year-old New Jersey resident Hadi Matar rushed the stage and stabbed and punched Rushdie multiple times before he was pulled off of the platform by other men. Rushdie was transported by helicopter to a local hospital. Matar was taken into custody and later charged with second-degree attempted murder and assault with a weapon. The perpetrator pled not guilty and he is being held without bail at the Chautauqua County Jail. The Federal Bureau of Investigation is looking into the incident and a motive remains unclear.

Ayatollah Ruhollah Khomeini, the former Supreme Leader of Iran, demanded that the author be killed in 1989 by issuing a fatwa, a ruling under Islamic law. The order came shortly after the publication of Rushdie’s novel “The Satanic Verses,” which many found sacrilegious for its fictionalized treatment of the Prophet Muhammad. Millions of dollars were offered by Khomeini for Rushdie’s death, and as a result, the author lived in hiding for several years.

“The Satanic Verses” was also viewed as controversial before Khomeini’s ruling, having been banned in several countries. The book has also sparked violent protests in Pakistan and the United Kingdom, in which copies of the book were burned and several bookstores were bombed.

Rushdie has been a distinguished writer in residence at NYU’s Arthur L. Carter Journalism Institute since 2015, and he has taught several courses at the school and has appeared at many events hosted by the university. The American Academy of Arts and Sciences elected him as a fellow in May of this year. At NYU, he most recently spoke alongside attorney Jameel Jaffer and author Larry Siems at an event hosted by the journalism institute in April, titled “LIES: A Conversation About Free Speech.”

“Silencing an invited speaker in a public setting is antithetical to the University’s core principle of the free exchange of ideas, and doing so by means of violence only compounds the offense,” Beckman wrote. “We admire Salman Rushdie for standing up for his ideas; the thoughts and best wishes of the NYU community are with him in the aftermath of this grievous attack.”

The scholar has written 13 novels and several works of nonfiction, and he holds honorary doctorate degrees from 12 universities. He received the Booker Prize in 1981 for “Midnight’s Children,” and he has been awarded several honors, including the Writers’ Guild Award, the U.S. National Arts Award and the Whitbread Prize for Best Novel twice.

This is a developing story.