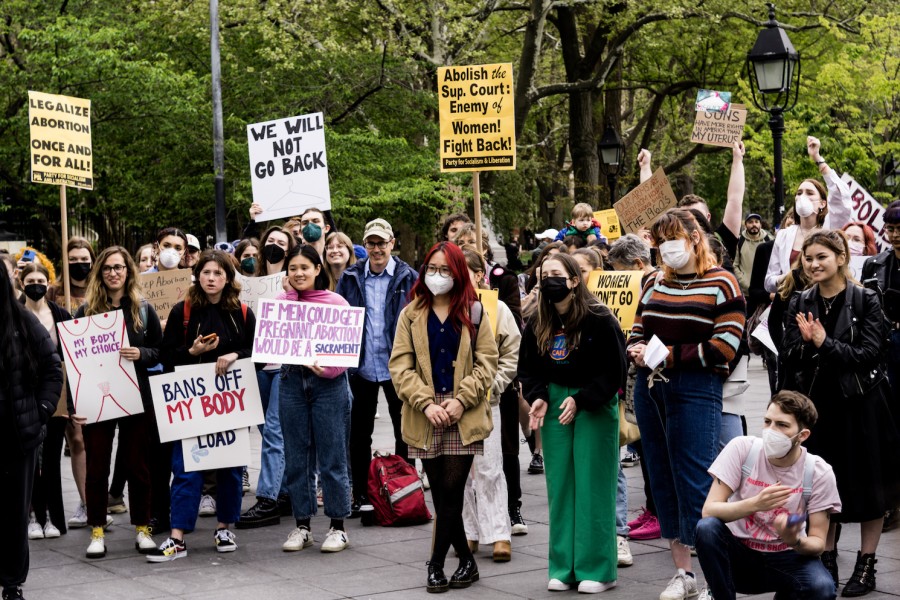 Abortion rights protest in Washington Square Park on May 3. (Photo by Kevin Wu)

Thousands of New Yorkers gathered at Foley Square on Tuesday to advocate for abortion rights and protest against the Supreme Court draft opinion leaked by Politico on Monday. If finalized, the ruling would overturn Roe v. Wade and Planned Parenthood v. Casey, decisions which protect the right to abortion that has been in place for nearly half a century.

Many protesters who attended wore green clothing — a symbol of the green wave movement in Argentina. The crowd made their voices heard with chants such as “My body, my choice.” Some brought signs with slogans like “Bans off our bodies!” and “Abortion is healthcare.”

During the protest, celebrities and government officials delivered speeches on the importance of protecting access to all abortions. Several organizations, including Planned Parenthood and the New York City chapter of the Democratic Socialists of America, attended the protest in solidarity.

“The supreme court overturning Roe v. Wade will make it so, in some states, only wealthy women will have the ability to get abortions,” GLS first-year Bryce DiMatteo, who attended the protest, said. “I am protesting with the goal of promoting reproductive rights for all. The political goals I am protesting for are to pressure the Supreme Court to take a second look at their opinion.”

The Supreme Court draft opinion, reportedly authored by Justice Samuel Alito, would overthrow the 1973 Roe v. Wade and the 1992 Planned Parenthood v. Casey rulings in late June or early July. The Supreme Court confirmed the authenticity of the leaked draft and is currently investigating how the document was obtained.

Among the speakers was New York Attorney General Letitia James, who emphasized the importance of upholding legal protections for abortion access. She spoke about her experience with abortion years ago when she was on the city council.

“I was just elected and I was faced with the decision on whether have an abortion or not, and I chose to have an abortion,” James said. “I walked proudly into Planned Parenthood and I make no apologies to anyone.”

James added that New York state plans to establish funds for individuals from elsewhere in the United States who want to come to the state for an abortion. The same day, New York City Council Speaker Adrienne Adams called upon Mayor Eric Adams to boost social service funding in the city’s budget to protect abortion access.

New York already legally protects access to abortions, even if Roe v. Wade and Planned Parenthood v. Casey were to be rolled back, through the Reproductive Health Act, which was passed in 2019. However, 26 states are certain or likely ban abortions, as access to abortions would be determined at the state level.

Shaniyat Chowdhury, a graduate student at NYU, said he attended the protest because he believes abortion rights are civil rights protections that should be granted to all.

“It’s not going to stop here because there are going to continue being attacks on other rights and communities,” Chowdhury said. “It is really important for all of us to come together and stand up.”

Many legal experts have raised concerns that Roe v. Wade’s dissolution will allow the Supreme Court to overturn other legislation that is not specifically mentioned in the Constitution. These include Griswold v. Connecticut in 1965, which guarantees the right for married couples to use contraceptives, Loving v. Virginia in 1967, which prohibits states from banning interracial marriage, and Obergefell v. Hodges in 2015, which established the right for same-sex marriage.

Joy Calloway, the interim president and CEO of Planned Parenthood of Greater New York, released a public statement on May 3 discussing the repercussions of overturning Roe v. Wade, including state-level bans on abortion that would quickly be passed.

“These bans disproportionally harm people with low incomes who cannot afford access to fundamental health care or travel to get it,” Calloway wrote. “Abortion bans are the perpetuation of racism, sexism, and economic injustice in a country that has a long history of stripping people of their own personal autonomy.”
Another pro-abortion protest forms at Washington Square Park

A group of around 100 demonstrators also formed at Washington Square Park near the arch, and later joined the protest at Foley Square. They demanded for full protection of the legalization of abortion.

“I don’t think the Supreme Court justices are going to change their minds, but I hope that they know from these rallies that if they do go through with their decision they’re going to have hell to pay,” Christina Bi, a first-year medical student at the NYU Grossman School of Medicine, said. “People are not going to take it lightly, and they’re not going to take it sitting down.”

The group cheered as Joyce Chediac — a member of the radical feminist group Redstockings of the Women’s Liberation Movement — took the microphone. The group hosted a speak-out in front of the Washington Square Methodist Church on March 21, 1969, which is regarded as the first public forum in the United States where women spoke publicly about their abortions.

Redstockings had also stormed a New York legislative hearing about abortion nearly a month earlier after finding out that the members of the committee consisted of 14 men and one woman — a Catholic nun.

“In the ’60s and ’70s, we thought we won,” Chediac said. “We thought we won abortion rights. We won the Civil Rights Movement, we took away Jim Crow, we ended the Vietnam War, we got affirmative action. We got a lot of legislation that was anti-racist and that protected people’s lives. But where are we now? We’re back where we were.”

Organizers within the New York City chapter of the Party for Socialism and Liberation called the unknown person who revealed the Supreme Court document a hero and thanked them for encouraging activists to fight to take back their rights.
NYU faculty reacts to unprecedented leaked draft opinion
Jonathan Nagler, a politics professor and co-director of NYU’s Center for Social Media and Politics, is concerned about the access to abortions in states where the procedure is heavily restricted, and he believes the overturning will lead to full prohibitions across the country. He expects more first-time candidates to run for state legislatures on platforms that advertise pro-choice positions.

“This is likely to spur blue state legislatures to try to put abortion protections in state constitutions,” Nagler said. “It will also likely make abortion a much more salient issue for Democrats and liberals. And that may play out most prominently in state legislative races, as state legislatures would be free to legislate restrictions on abortion as they choose if the decision comes down as written.”

Social and Cultural Analysis professor María Josefina Saldaña-Portillo, however, said she is worried that citizens living in blue states will be complacent in their advocacy since the repeal of Roe v. Wade would not directly impact them.

“The largest problem I see as I’ve started the conversation is if there will be enough of a reaction, not just in blue states, but in red states to make a difference,” Saldaña-Portillo said. “The only way this is going to change is if there is national legislation. You can’t pass national legislation with the kind of electoral map that we have right now.”

Politics professor Lawrence Mead, who researches American politics and policy making, said he agreed with the Supreme Court that Roe v. Wade should be overruled. He said he does support the right to an abortion, but believes states should enact their own legislation.

“The attempt to find a right to abortion or other rights in the Constitution that are not specifically mentioned is a mistake, and we should have never gone down that road,” Mead said. “I’m old enough to remember before Roe v. Wade. There was great heartburn around the country over abortion, and state legislatures were struggling about how to deal with it.”

Christine Harrington, a politics professor and the founding director of the NYU Institute for Law and Society, said she remembers when Roe v. Wade was passed when she was a college student. She encouraged students and faculty to engage in advocacy and express their views against the potential ruling.

“Do not be passive about politics in these times,” she said. “They’re very critical when a numerical minority is taking away democratic rights.”