With NYU’s Grossman medical school facing backlash for considering hiring David Sabatini, the school and the biologist have been supported by his former colleagues and students. 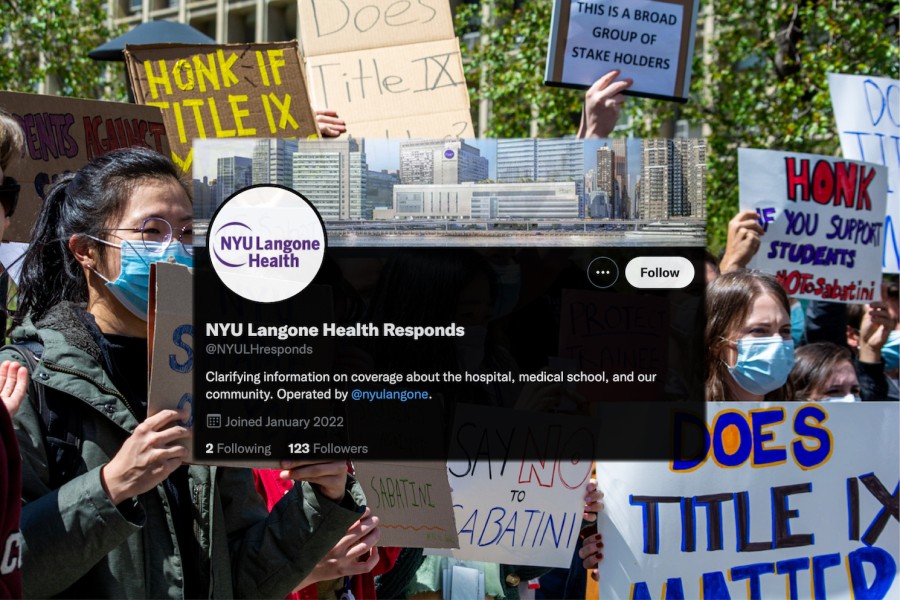 NYU’s Grossman School of Medicine is considering hiring David Sabatini, a biologist accused of sexual misconduct. A Twitter account called NYU Langone Health Responds was created in January 2022 and has only posted about Sabatini’s consideration. (Image via Twitter, Staff Photo by Manasa Gudavalli)

As the NYU Grossman School of Medicine continues to consider hiring biologist David Sabatini, an NYU Langone Health Twitter account and several Massachusetts Institute of Technology colleagues have voiced their support for the scientist.

Grossman has been in talks for several weeks about the potential hiring of Sabatini, a former tenured professor at MIT who resigned after allegations of sexual misconduct were brought against him.

“The purpose of @NYULHResponds is to provide added info to ongoing coverage and discussion on this issue,” the tweet reads.

A Langone spokesperson confirmed that the hospital runs @NYULHResponds, which posted a statement about the ongoing hiring conversations on April 28. The post claims that a primary reason why the school has not yet come to a decision on Sabatini’s hiring is the incomplete nature of public information about the scientist’s past. The school said that dozens of Sabatini’s colleagues have described their personal experiences with the scientist, which are “at odds” with the outcome of MIT’s investigation.

“These are all accomplished and upstanding scientists, people that worked alongside Dr. Sabatini for years and also during the timeframe at issue here,” the statement reads. “We would never make any hiring if we thought it would place our personnel at risk or compromise in any way our commitment to hiring people of the highest integrity and professionalism.”

The account has responded to several tweets by members of the NYU community and other scientific communities who have expressed their concerns about Sabatini’s possible hiring. A thread of identical replies say that Sabatini was cleared by MIT and the Whitehead Institute of “research misconduct” and that the facts circulating about the situation on social media have been incomplete and misleading.

“We know that there are concerns in our community about news accounts that we are evaluating the possibility of hiring Dr. David Sabatini,” the thread reads. “One of the central questions we are examining is whether the Whitehead investigation was indeed thorough, not least because it was conducted in secret and appears to have lacked many aspects of due process, as Dr. Sabatini’s legal filings recount in detail.”

A group of students and alumni who worked in Sabatini’s lab at the Whitehead Institute and MIT published a letter under the name “Concerned Sabatini Lab Alumni” on April 28. They said they are upset by the accusations made against Sabatini and hope their letter will push NYU to hire him. The letter states that the signatories preferred to remain anonymous due to fear of retaliation from MIT.

“Although David could be a blunt and direct mentor, David’s interpersonal style was intended to push his lab members to fulfill their potential in the pursuit of scientific excellence,” the letter reads. “With this letter we wish to affirm that we never experienced or observed an abusive lab culture or a sexualized lab environment, and we did not witness sexual harassment.”

Catherine Koch, a Ph.D. student at MIT, said Sabatini was assigned to be her major adviser as an first-year undergraduate at the school in 2010. She joined his lab in 2011 and later asked him to work on her thesis committee. She described him as a lifelong mentor.

Koch was unaware of the joint letter, but said she has nothing malicious to say about Sabatini, crediting him for her career in science. She said he has a cult following at MIT and believes that not all of the facts about the situation are being taken into account by conversations on social media.

“Sexual harassment stuff does happen — things do happen,” Koch said. “This is a far more complex situation than a lot of people acknowledge. People just see this headline of, ‘Sexual harassment, OK. He’s a monster.’ I don’t think that that is true.”

University spokesperson John Beckman previously told WSN that NYU president Andrew Hamilton had advised against the hiring of Sabatini. Hundreds of students and staff within NYU and the larger scientific community have signed a letter condemning the continued consideration of him for employment.

On April 27, hundreds of Langone students, staff and faculty staged a walk out of the medical school to protest Sabatini’s possible employment. A former MIT employee, who said they regularly witnessed inappropriate behavior by Sabatini, told WSN that the school’s ongoing conversations about his hiring show a lack of respect for the university community — especially female students.

NYU Langone administrators — including Grossman executive vice president Dafna Bar-Sagi and Langone general counsel Annette Johnson — held a forum on April 28 in which they lauded Sabatini’s research accomplishments and disputed several allegations made against him. Johnson said MIT’s investigation into his behavior was conducted in an unfair manner and claimed that sexual harrassment allegations made against Sabatini were unfounded.

On the Zoom call, screens were marked with attendees’ email addresses, making it impossible to share images or recordings of the event without identifying oneself.

“I will simply say that on the basis of the evidence that we have reviewed, including text messages, our understanding is that this was a relationship of mutual interest and not one of coercion,” Johnson said in the closed forum.