‘I need to get out’: NYU Shanghai lockdown leaves students struggling in dorms

Since the city of Shanghai's government lockdown began on March 28, students have been forced to quarantine in the dorms, take classes online and participate in daily testing. 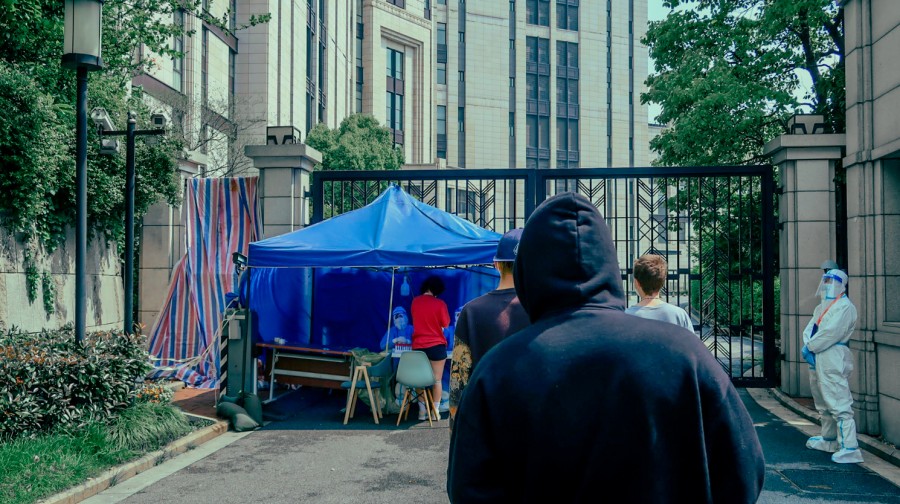 Amid a surge in COVID-19 cases, the city of Shanghai entered a weeks-long lockdown. NYU Shanghai community members are stuck in the city, quarantining in dorms and taking classes online. (Photo by Carlos Casas)

On March 13, NYU Shanghai first-year Raghav Dembla received an email from David Pe, the dean of students at the campus, informing him that students and faculty would be unable to leave the city due to a government ordinance. The university offered Dembla and other students the option to stay in the student residence halls or leave the campus without the ability to return for the foreseeable future.

Over a month later, Shanghai is still on lockdown. Dembla, who is living in NYU housing, chose to remain in the residence hall rather than return to his hometown in India due to travel expenses and the possibility of being barred from returning.

“The thing with me and most of the international students who got here, we don’t have that much financial security, we spent a lot to get here,” Dembla said. “If they go, they’re not going to come back for sure because we got the residence permit and everything just now. It’s not an option for most of us.”
NYU Shanghai students on their experience in lockdown

When Shanghai’s government imposed restrictions on residents leaving their homes due to rising COVID-19 cases on March 28, an NYU Shanghai spokesperson said NYU Shanghai moved all of its campus operations online in mid-March in an effort to decrease the spread of the omicron variant.

Tong Shijun, NYU Shanghai’s chancellor, moved into the university’s Jinqiao Residence Hall on April 14 in solidarity with the students who have been stuck quarantining. Since then, he has been living in the dorm.

Shijun has been required to follow the same COVID-19 guidelines as students and occasionally leaves his room to serve meals throughout the residence hall, according to the spokesperson.

When a student tests positive, Dembla said, the residents on their floor are sent to Pusan Road — another on-campus residence hall — which is now used for students to self-monitor for symptoms. Dembla said that one person in his tower tested positive for COVID-19 and was sent to a government facility to isolate.

“It’s like a makeshift hospital, so there are no beds,” Dembla said about the government complex. “I’ve seen some videos of cardboards being used as a bed. There is no facility in any sort of way, people are forced to sleep on the floor. There’s no facility for getting baths.”

Students living in NYU housing can only interact with students on their floor — who they share bathroom and cooking spaces with  — and cannot access other residence halls. NYU Shanghai first-year Annie Church said that the lockdown has made it difficult to access menstrual care products. After requesting products from their resident assistant, Church had to borrow them from others living on her floor since they did not receive a response for over a week.

“We tried multiple times to order tampons online through different vendors, and every single time the orders were canceled,” Church said. “What the school was telling us was that RAs do have access and they got a big shipment of all of these supplies, but that they were not disturbing them.”

NYU Shanghai sophomore Maya Spaulding, who documented her quarantine experience on TikTok, said she has had to take the remainder of her classes online since the lockdown began. She said that the meal boxes with prepared food served by the university makes her feel ill because she has dietary restrictions. Spaulding has contemplated flying home to avoid eating quarantine food or moving to a different facility if she tests positive for COVID-19.

“If the time zone is inconvenient, at least for me, that’s a sacrifice I’m willing to make knowing that I can eat food that won’t wreck my stomach and I don’t have to worry about being shipped off somewhere,” Spaulding said. “After these COVID cases, a bunch of our kids were like, ‘I need to get out.’”
NYU professor said she was misquoted by the New York Post
CAS professor Rebecca Karl sent an email to a list of professors at NYU claiming that the Shanghai campus had covered up several student suicides. The New York Post reported that comment was in connection to the COVID-19 lockdown. In an email to WSN, Karl said that while she believes that the school is hiding student suicides, she does not think they are tied to the situation.

“I said that as a part of a general characterization of a deteriorating situation in NYU-SH generally — some of which is tied to the rigors of the lockdown and the ways in which NYU-SH leadership is handling the situation and some of which is just more generally a sense that things at NYU-SH are not going well,” Karl wrote to WSN. “I have been made aware by students, faculty, and staff who have reached out to me unbidden and unprovoked.”

“Let me be clear, there have been no suicides in NYU Shanghai during or related to the lockdown,” Beckman wrote to WSN. “It is rare for the university to criticize the remarks of individual faculty members, but it is indefensible that an NYU faculty member would irresponsibly traffic in false rumors about something so serious, particularly when public communications about suicide can have a dangerous impact on at-risk students.”

Karl said the New York Post reporter, Jon Levine, provided the university with misleading information about what she said.

“Beckman, understandably, responded as he did to an allegation I never made and that was invented by Levine for inflammatory purposes,” Karl wrote to WSN. “That said, Beckman usually is in the business of covering up whatever wrongs NYU does across its colonial empire, so his response is never particularly accurate but only institutional gaslighting.”