Grossman School of Medicine administrators offered justifications for considering hiring David Sabatini — who was forced out of three institutions due to sexual misconduct allegations — in a forum on Thursday, April 28. 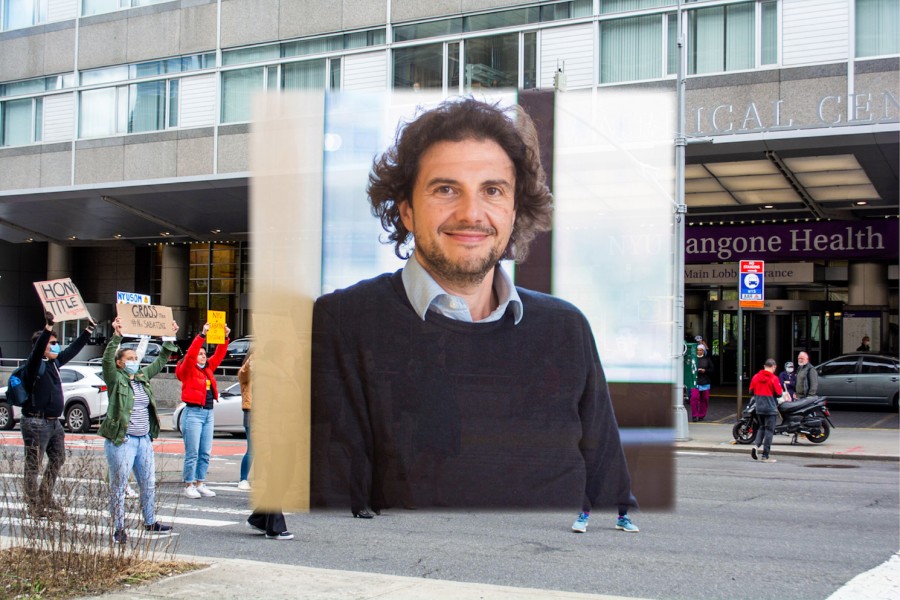 Cancer biologist David Sabatini was accused of sexual misconduct at the Massachusetts Institute of Technology and Whitehead Institute. Despite the accusations, the NYU Grossman School of Medicine is considering hiring Sabatini after his resignation from MIT. (Image via MIT, Staff Photo by Manasa Gudavalli)

Grossman executive vice president Dafna Bar-Sagi and Langone general counsel Annette Johnson sought to explain why Sabatini should be considered as a candidate for the role, citing his research accomplishments and disputing some of the allegations made against him.

Sabatini resigned from MIT on April 1 after a graduate student’s sexual assault allegations led a committee of administrators to recommend revoking his tenure. He also resigned from MIT’s Whitehead Institute, a biomedical research center, and was fired by the Howard Hughes Medical Institute in 2021 after outside lawyers said he went against MIT’s sexual harassment and misconduct policies.

During the forum, Bar-Sagi said it was difficult to find someone to come forward with negative experiences about Sabatini. Johnson claimed that accusations of sexual harassment against Sabatini were unfounded.

“I will simply say that on the basis of the evidence that we have reviewed, including text messages, our understanding is that this was a relationship of mutual interest and not one of coercion,” Johnson said.

Bar-Sagi quoted a letter from 14 professionals in Sabatini’s field in support of his academic accomplishments. She also read from a letter by Harvey Lodish, a professor who worked in a neighboring lab to Sabatini at the Whitehead Institute. The letter, which had been addressed to the biology department head at MIT, detailed the positive environment Lodish had witnessed in and around Sabatini’s lab at the university.

Johnson said three MIT students told the Whitehead Institute that the center’s investigation into Sabatini — in which the students were questioned about their experiences with the professor — had been manipulative and abusive.

In response to NYU president Andrew Hamilton, who strongly recommended against hiring Sabatini, Johnson said Grosssman administration disagreed with his opinion because of their research into MIT’s handling of the sexual misconduct case. She said that MIT’s investigation did not properly provide Sabatini with opportunities to respond to the misconduct claims.

Bar-Sagi also addressed allegations of nepotism, responding to critics who had pointed out that Sabatini’s father, David Sabatini, is a research professor at Grossman’s department of cell biology. She said there were no private donations associated with Sabatini’s candidacy and that she has never spoken with his father.

Bar-Sagi said Sabatini’s accomplishments as a researcher and his potential for future success are major factors in the school’s continued consideration of his candidacy.

“The only thing I can say is that we hired a fair number of people here that had controversy surrounding them on social media,” Bar-Sagi said during the forum. “David Sabatini is someone that has contributed to biomedical research in a way that is probably as significant as it could be.”

Joseph Osmundson, an NYU clinical assistant professor of biology, said he was disappointed but not surprised by what he heard at the forum. He said it seemed as if they took Sabatini’s side in the dispute and disregarded community concerns about his potential hiring.

“I’m very confused about what they wanted to accomplish, because they made statement after statement that only made people more upset,” Osmundson said. “They were acting like lawyers for Sabatini. They had legal counsel essentially reading from his lawyer’s statements and never from the complaint against him. It was a very odd, ‘Twilight Zone’-like experience.”

Bar-Sagi said that Sabatini approached her personally to inquire about employment at Grossman and that a decision has not been made regarding his potential hiring. She added that, if hired, Sabatini would be offered a nontenured position with a probation period of at least three years — which she said she believes is long enough to determine whether he aligns with the school’s institutional policies.

Bar-Sagi said the recruitment committee is creating an internal repository of documents and resources about the process of Sabatini’s potential hiring.

The initial announcement of the town hall was met with confusion from faculty and students, who were unsure whether they would be allowed to attend and speak. An invitation to the forum was sent to Langone and Grossman students and staff on the afternoon of April 27.

On April 28 at around noon, a follow-up email notified recipients that the forum had been restricted to a smaller group of participants, citing Zoom capacity limits. (NYU Zoom users can host up to 300 attendees by default and up to 1,000 attendees by request to NYU IT services.) A Grossman spokesperson told WSN that the event had only been intended for the school’s research community.

A link to a new meeting room was sent only to trainees, research leadership and research faculty.

Paul Frazel, a Ph.D. student at Grossman, said that he and around 15 other students watched the forum together in a medical school classroom. He said the group made bingo cards with language they expected to hear from the administrators, including phrases like “two sides of the story” and “groundbreaking science.”

“We kind of expected for them to deny and obfuscate, but it seemed like they came out swinging against various victims,” Frazel said. “They came out swinging against the student body. They sort of implied that we were all just hopping on the cancel culture train and doing this because it was trendy on Twitter and not out of the obvious concerns about equality with women, which was never talked about.”

On the Zoom call, attendees’ screens were watermarked with their email addresses, making it impossible to capture images or recordings of the event without including one’s own identifying information.

Frazel said he believes the watermarks were meant to prevent students and staff from sharing images from the event. Osmundson shared similar concerns, saying that this measure worried him about the transparency of the hiring process and the safety of his colleagues.

“By doing it in this way, where we trainees had to find out in the press by revoking what was a public forum and making it a private forum and then putting watermark email addresses across the Zoom screen, people rightly feel afraid — afraid for their safety as mentees and afraid if they speak up that there will be institutional reprisals,” Osmundson said.

On Wednesday, April 27, hundreds of community members at Grossman walked out in protest of Sabatini’s employment consideration outside of NYU Langone’s Kimmel Pavilion. A letter addressed to Grossman and Bar-Sagi denouncing the potential hiring has also been signed by over 300 students and faculty from NYU, MIT and other universities.