Some NYU School of Law students claim an open letter from the student group Law Students for Justice in Palestine used antisemitic tropes and defended the killings of Israeli civilians. 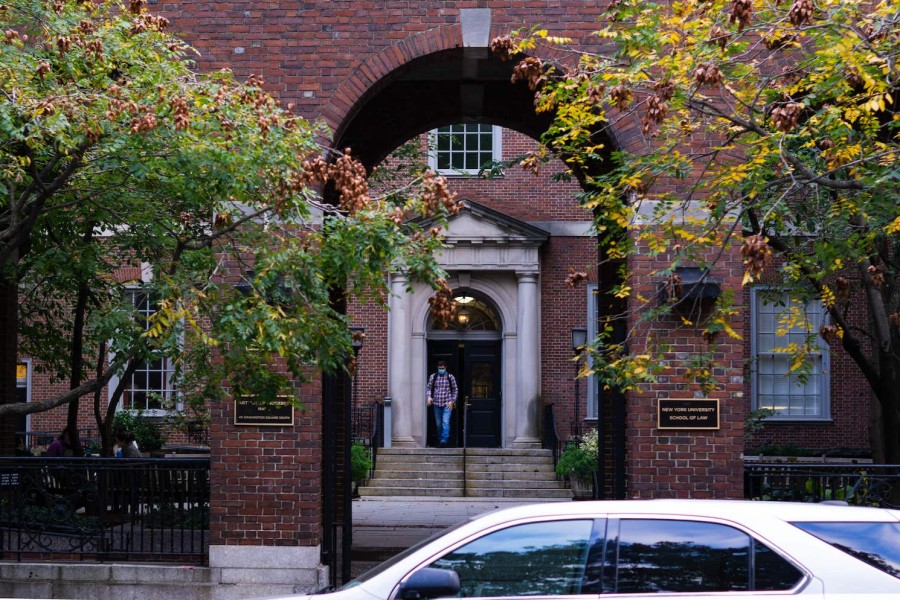 A petition has been created in opposition to NYU’s Law Students for Justice in Palestine letter, which was released on April 11. It addresses the recent string of Palestinian attacks in Israel. (Photo by Kevin Wu)

Over the past two weeks, NYU School of Law students have been engaged in a bitter schoolwide debate about the Israel-Palestine conflict involving dozens of emails, accusations of antisemitism and support for apartheid, and responses from university administrators including law dean Trevor Morrison and NYU president Andrew Hamilton. The argument started on the law community’s all-purpose listserv, called Coases, an email group open to all NYU Law students.

Most recently, NYU Law Students for Justice in Palestine criticized the university community in an April 25 statement for targeting individuals who stand against the Israeli occupation of Palestine.

However, some NYU students and administrators claim that an earlier letter sent by LSJP on April 11 used antisemitic tropes and defended the shootings of Israeli citizens.

In the April 11 letter, the activist student organization stated that they unequivocally stand with Palestinians resisting oppression. One phrase in the letter, “the Zionist grip on the media is omnipresent,” was criticized as being antisemitic. The letter was written in response to an April 7 email from Law Students for Israel, a Zionist NYU Law student organization, which condemned recent terror attacks in Israel.

In response to the LSJP letter, Morrison emailed law students on April 12 condemning intentional killings of civilians and reiterating the school’s commitment to freedom of speech. The next day, he discussed the letter at a forum with the Jewish Law Students Association, which provides academic and spiritual support to Jewish students.

Morrison sent another email to law students on April 20 denouncing terrorist violence against civilians and noting that the school had received complaints of antisemitism in violation of NYU’s Non-Discrimination and Anti-Harassment Policy. Urging students to be respectful, he said that individuals who supported LSJP’s April 11 email have been targeted on social media and in group chats.

“Whatever the intent of those who used those words, I am concerned about their potential harmful effect on some Jewish members of our community,” Morrison wrote regarding the antisemitic trope in LSJP’s letter.

That same day, Hamilton addressed the Bronfman Center for Jewish Student Life in a statement criticizing LSJP’s letter for using antisemitic language and suggesting that victims of terrorist violence are to blame for their deaths.

Bill Baker, the president of Jewish Law Students Association, said that his student organization wants to create an environment where students can express diverse views. He said, however, that some language in the letter was unacceptable.

“We’ve really appreciated President Hamilton and Dean Morrison’s responses to this,” Baker said. “They have been very receptive to the concerns of the Jewish community. They’ve done a great job of listening to us and taking us seriously and also considering steps to move forward in a healthy and positive direction — and in a way where better dialogue can be fostered, and more productive dialogue can be fostered in the law school at large.”

NYU Law students have since created a petition condemning the LSJP letter and listing demands for Morrison and the law school administration. The petition demands that the school publicly express its commitment to nonviolent social justice, hold students accountable, and ensure that scholarship recipients — some of whom signed LSJP’s letter — are held to scholarship guidelines.