Extinction Rebellion NYC held an Earth Day festival in the park, calling on corporations and the government to act against the fossil fuel industry. 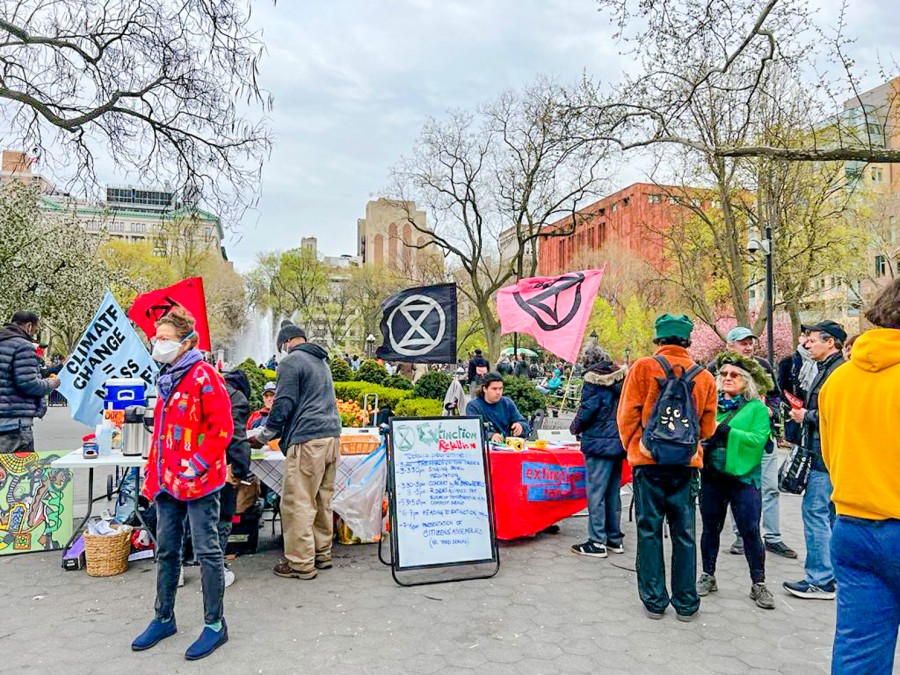 Extinction Rebellion NYC, an organization that advocates for climate justice via civil disobedience, hosted an art and music festival in Washington Square Park from April 19-22 to celebrate Earth Day and raise awareness of the climate crisis. The group is demanding that the federal government reduce greenhouse gas emissions to net zero by 2025.

Ed Fanning, an Extinction Rebellion NYC member who has been involved in the Green Party, discovered the organization online. He said that individuals, corporations and governments are not taking substantial action to mitigate the impacts of climate change, despite scientific proof.

“We are sleepwalking our way into catastrophe,” Fanning said. “The only thing we can do to try to wake people up is to take nonviolent action, get in the streets, be creative and try to get the message out.”

During the event, Sally Lake, another Extinction Rebellion NYC member, said that elected officials’ mishandling of the climate crisis is increasing the threat of human extinction. They said the organization plans to host future events to call attention to the dangers of the fossil fuel industry.

“[Earth Day] is one of those things that has been successful, but has not really moved the needle on climate change,” Lake said. “We need to do a lot more.”

On April 22, 19 Extinction Rebellion NYC members were arrested after blocking the entrance of the CitiBank headquarters in Tribeca. Gallatin first-year Gigi Weisberg, who joined the organization in March and was arrested during the protest, began her own NYU affinity group to donate money to mutual aid causes. She hopes to expand the chapter to other universities.

Six protesters, including Weisberg, held hands before entering CitiBank, where they stood on desks and shouted “stop funding climate change” to employees. According to Extinction Rebellion NYC, the corporation is the second-largest funder of fossil fuel companies and the largest funder of coal in the United States.

“We were singing, some of us were praying — it was very emotional,” Weisberg said. “I’ve been waiting for this my whole life. It just felt so right.”

Laura Cole, an Extinction Rebellion NYC member, said that the group is working to rebrand Earth Day, which takes place annually on April 22, to “Earth (Crisis) Day.” She said that the organization hopes to use disruptive measures to inspire systemic action by corporations and politicians.

“It should be a year-round thing,” Cole said. “You shouldn’t dedicate one day to the earth. We are running out of time for feel-good, corporate greenwashing. Earth has really gotten co-opted by corporations. That’s not going to save us — we’re really running out of time.”