After a Stern first-year was barred from entering his classes, he created a petition to end the university’s Daily Screener. 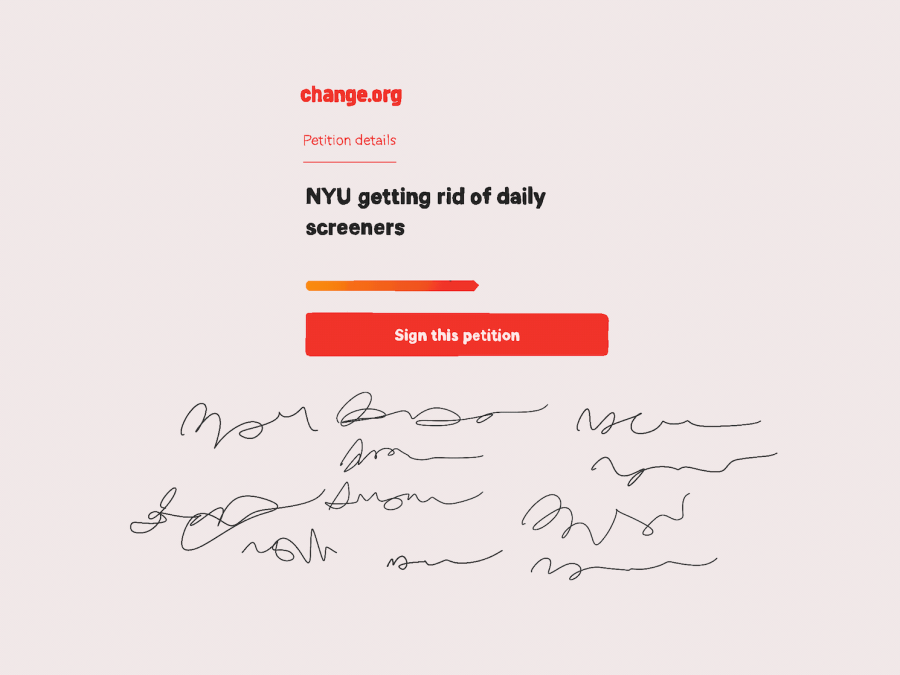 Despite complaints about the inconvenience of the Daily Screener, a petition to put an end to daily screener has begun to lose traction. (Staff Illustration by Susan Behrends Valenzuela)

A petition calling on NYU to stop requiring the Daily Screener — a COVID-19 vaccination pass that students, faculty and staff must show to enter university buildings — has collected more than 250 signatures. Stern first-year Christian Villarie, the creator of the petition, planned to present it to the NYU administration upon reaching 500 signatures.

“[The petition] completely lost this fire at this point, which is unfortunate,” Villarie said. “But I’m just taking it with me whenever someone decides to answer me. I’m using it somewhat as leverage.”

Villarie said he started the petition on March 30 after he had to show his Daily Screener twice to an NYU Campus Safety officer and NYU Eats employee at Weinstein Residence Hall. But he said he had been frustrated with the screener for months.

He said his screener and NYU ID were deactivated last November despite receiving a negative COVID-19 result through the university’s testing program. After contacting NYU Campus Safety and the COVID-19 Prevention & Response Team, he was told the issue would be resolved.

“I couldn’t go to any classes because nobody could figure out how to reactivate my screener,” Villarie said. “For a whole week, I just missed the class and the teacher would email me a recap.  I couldn’t get into the gym. I couldn’t go anywhere.”

Other NYU students have reported difficulties with attending class due to technical problems while completing the Daily Screener. After her phone screen broke, LS first-year Hannah Arndt missed three days of classes because she could not show Campus Safety officers her screener.

“The Daily Screener definitely made it just impossible to get into any of the buildings, which was just horrible,” Arndt said. “I literally felt locked out of school.”

A CAS sophomore, who requested to be anonymous due to concerns about disciplinary action from the university, has been attending his classes by showing a screenshot of a completed Daily Screener from September 2021.

The student, who signed the petition, believes that the Daily Screener is impractical and should not exist.

“When there’s like 1,000 people coming through the doors, they can’t actually look at it,” they said. “If you’re furthest from where the guard window is, they can’t see the exact date you have — it’s impossible.”

According to NYU spokesperson John Beckman, the Daily Screener helps Campus Safety officers determine if students are compliant with the university’s COVID-19 vaccination and testing requirements. The Daily Screener also checks the vaccination status of visitors and other non-NYU affiliates.

NYU’s Daily Screener was initially mandated to document vaccine compliance under the New York HERO Act, a daily COVID-19 screening process for private-sector workplaces like NYU. The law was lifted on March 17, which means that NYU is no longer required by the state to enforce the screener. Beckman said that the university does not know if or when the Daily Screener will be removed.

“Any changes to process would require significant back-end work, and it would require NYU community members, schools and administrative units to learn yet another new process, which typically generates a significant amount of problems, confusion, and delay,” Beckman wrote in a statement to WSN.