Messages from NYU Campus Safety and the Tandon School of Engineering dean came hours after a mass shooting disrupted commutes to and from campus and left community members wary of taking the subway. 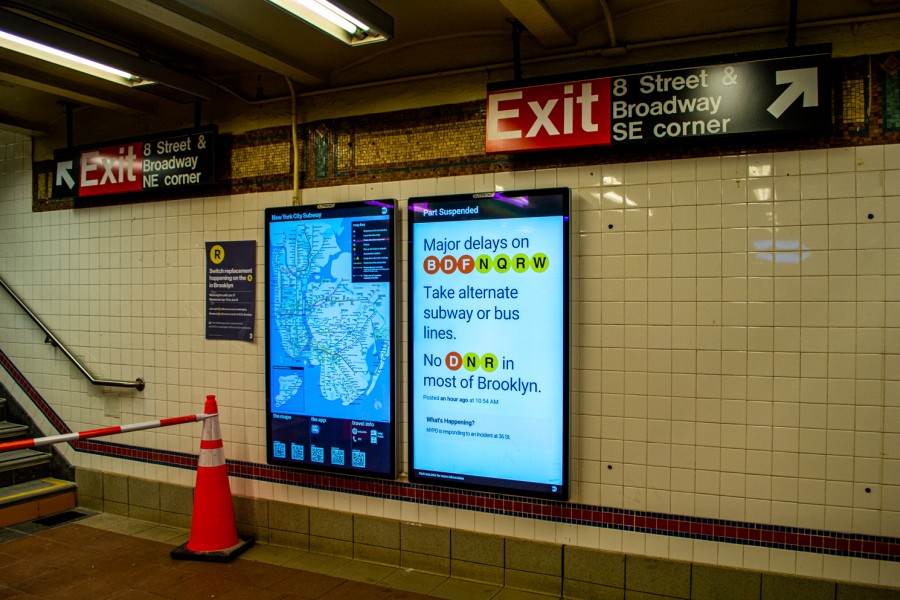 Following a mass shooting in Sunset Park, Brooklyn, there were major delays on the B/D/F and N/Q/R/W subway lines. (Staff Photo by Manasa Gudavalli)

Gallatin senior Anushka Dhoot woke up on the morning of Tuesday, April 12, to several texts from her family and friends telling her to avoid taking the subway. After seeing in the news that there had been a mass shooting in Sunset Park, Brooklyn, she called NYU Campus Safety. An officer told Dhoot that since the shooting happened off campus, it may not require a universitywide alert.

“They have an obligation to alert people when it affects commuting at such a large scale,” Dhoot said. “It was just totally mishandled and I didn’t like how I was spoken to at all.”

At least 29 people were injured in the shooting, which took place on an N train at the 36th Street subway station around 8:30 a.m. The suspect released a smoke bomb before opening fire in the station. He was reportedly wearing a green construction vest and put on a gas mask before fleeing the scene.

Frank James, 62, has been identified as a person of interest. The New York City Police Department has yet to find the suspect as of Tuesday evening, according to police commissioner Keechant Sewell.

NYU released a statement from Campus Safety head Fountain Walker on Twitter at 12:30 p.m. Walker said the shooting took place far away from NYU’s Washington Square and Brooklyn campuses and that the university would maintain normal operations. A similar statement was sent in an email to the NYU community at about 1:30 p.m.

Jelena Kovačević, the dean of the Tandon School of Engineering in downtown Brooklyn,  encouraged Tandon students to contact her or their professors if they are experiencing transportation issues due to the incident in an email sent at 3:26 p.m.

University spokesperson John Beckman said that NYU provided updates to the community at around the same time as other New York City universities.

“We always want the NYU community to be satisfied with our communications, and it’s a source of sorrow when they don’t,” Beckman wrote in a statement to WSN. “There did not appear to be an imminent threat to any NYU community members or locations; we had no information to suggest that NYU community members were among the injured; and the details of the event — whether there were gunshots, explosive devices, and particularly the motive  — were obscure. In a situation like this, getting a clearer picture takes a bit of time.”

Steinhardt junior Stella Caridad Salomone Sotolongo said she knows there was not much the university could have done to keep students safe, but was disappointed by the time it took NYU to send an email to the community.

“I don’t think it was early enough,” Salomone Sotolongo said. “All they said was ‘Oh, just avoid the area.’ But it’s just not that simple.”

Tandon junior Maddie Mai was in class in Brooklyn when she learned about the shooting. She decided to take the NYU shuttle back to the university’s Washington Square campus after her classes were moved online for the rest of the day.

“NYU as a whole should definitely increase transportation for students on the Tandon campus,” Mai said. “They should increase Safe Rides, shuttle times, shuttle availability, and pick-up and drop-off locations just to make sure all students feel comfortable with commuting.”

New York City Mayor Eric Adams said in a press conference on Jan. 6 that he planned to increase police presence in subways as an effort to promote public safety. Adams introduced his subway safety plan in February, which allocated resources for medical and mental behavioral clinicians to join the New York City Police Department in responding to community crises within subway stations.

“I wish to thank all of the first responders who responded to the scene or at the local hospitals, helping with today’s incident,” Adams, who is currently in isolation after testing positive for COVID-19, said in a press release following the incident. “You are what make New York the greatest city in the world, and I thank you for supporting your fellow New Yorkers.”

The recent shooting comes after the murder of Michelle Go in a Times Square subway station in mid-January and incidents in subway stations near campus. Students have raised concerns over their safety on the subway and the effectiveness of Mayor Adams’ subway plan. Transit crime rates are rising — increasing by 29.6% in the last 28 days — while subway ridership has decreased to 3.3 million daily riders from 5.5 million pre-pandemic.