Eggs were thrown at an admissions ambassador and a group of prospective students near the southeast corner of Washington Square Park on Monday, March 28. 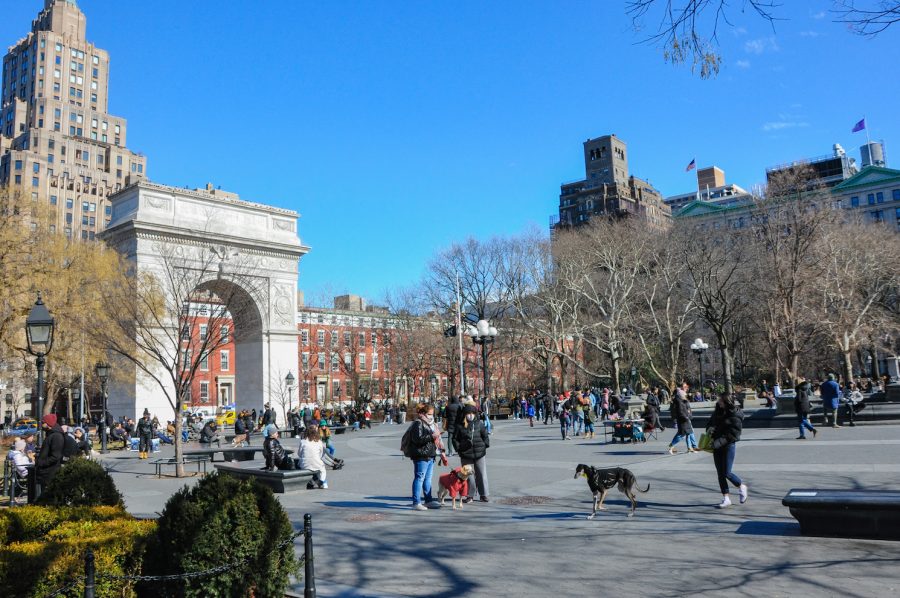 An admissions ambassador and his tour group were egged while standing outside of Goddard Hall on March 28. One student was struck and an NYU Campus Safety officer arrived at the scene. (Photo by Kiran Komanduri)

Admissions ambassador Maximus Medary and his campus tour group were egged while standing outside of Goddard Hall at around 2:30 p.m. on Monday, March 28. Medary said he was leading a tour when eggs were thrown at the group, hitting one prospective student.

“I see this white spherical shape coming towards my group, and I initially thought it was a snowball because it just snowed last night,” Medary said. “In my head, I was thinking, ‘This is going to be bad.’ And then I saw the yolk on the ground.”

Medary immediately checked on the student who was struck before contacting his supervisor. Another student ambassador arrived at the scene with an officer from NYU Campus Safety.

“It seems like they did what they could in the exact moment,” Medary said. “I would say that they did what they should do, which is not always what they do when it comes to public safety. I still feel there should be better protection of the ambassadors, whether or not that means having safety officers directly with each group.”

Medary said he looked around for a perpetrator, but did not see anyone holding egg cartons or acting suspiciously. He made the decision to continue the tour after he was reassured by the student, who said they were able to continue.

The egging incident follows attacks on two other campus tour guides who have been verbally and physically harassed since in-person tours resumed in August 2021. NYU spokesperson John Beckman previously denied that any admission ambassadors or tour participants had been physically attacked, but recognized that other forms of harassment have occured.

During the incident, Medary initially contacted his supervisor over his walkie-talkie, but received no response. He decided to call the front desk at the admissions center.

In response to the concerns of admissions ambassadors, tours are now led by two guides when staff is available. However, Medary was leading the tour solo. Tour guides also have undergone de-escalation training with the Campus Safety department and use walkie-talkies to communicate with supervisors and staff at the Bonomi Family Admissions Center if an incident occurs.