Protesters wearing body cameras stood outside of the library on Wednesday afternoon with graphic images to discourage students from supporting the right to get an abortion. 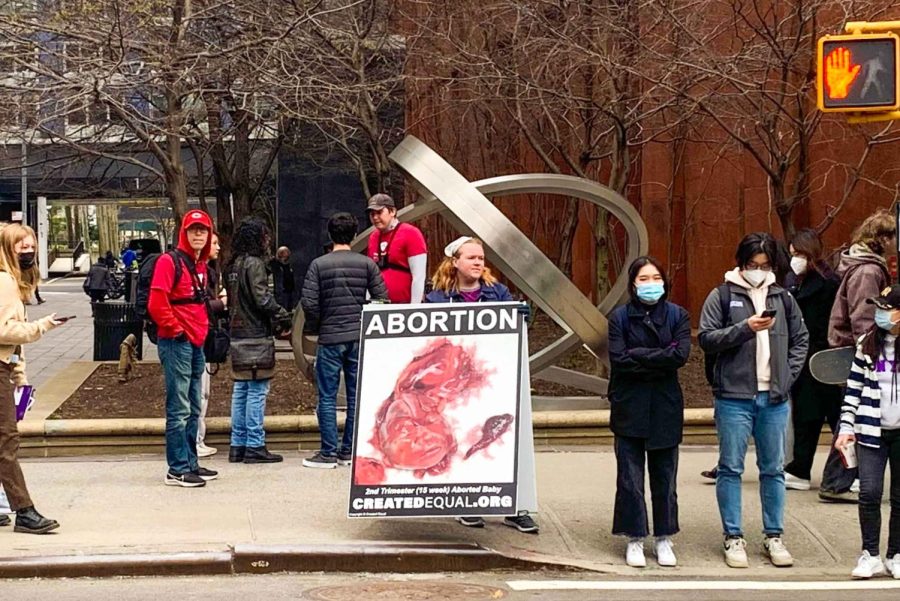 Around 15 anti-abortion protesters wearing body cameras stood in front of Bobst Library with graphic images of aborted fetuses — intended to discourage passing students from supporting abortion rights — on Wednesday, March 23. Created Equal, the national organization that arranged the protest, has been rallying in front of New York City universities, parks and abortion clinics throughout the week.

Some NYU students confronted the anti-abortion protestors and called for them to take down their images. The two groups disputed abortion rights and the mental health effects of the protest on students. One of the pro-abortion rights protesters, Steinhardt graduate student Saige Martinez, was concerned about how the displayed images could negatively impact students.

“The images and the rhetoric that is being pushed is definitely damaging, and it’s very jarring for a lot of students,” Martinez said. “It could be triggering for students who have undergone abortions or have friends or family that have undergone them.”

Mark Harrington, the founder and executive director of Created Equal, said the organization is against abortion throughout an individual’s entire pregnancy, including in cases of rape and incest. He said that abortion can only be considered when a pregnancy is dangerous to the pregnant person. Harrington said that people’s discomfort with the images is necessary to promote his anti-abortion beliefs.

“Folks that have participated in that, women and men, if they maybe don’t feel right about what they did, they’re going to react in different ways,” Harrington said. “That’s just unfortunately a part of the whole thing is that people have participated in abortion are likely going to feel remorse or are going to have a reaction towards it.”

The group is participating in one of their so-called Justice Rides, where members travel around the country in a van staging protests in major cities. They have been to multiple locations around New York City including Columbus Circle, Times Square and the Planned Parenthood on Bleecker Street. They plan to go to Columbia University within the next week.

Harrington said that the protestors wore body cameras for security purposes. He wanted to have video footage to give to the police in case signs were stolen or if anyone was assaulted.

“We’ve already had people try to steal our signs, we’ve had people try to destroy our signs,” he said. “We’re concerned about being assaulted and unless you have it on video, there’s very little case you can make with the police and prosecute people.”

Steinhardt senior Alyssa Jaffe criticized the actions of the anti-abortion group and expressed frustration with Campus Safety’s lack of action towards the group. She said a group of people asked security guards to stop the protests but were dismissed since the demonstration was not violent.

“It’s frankly insulting to see this and especially with very horrifying pictures when you don’t know what people have been through in their lives, and this might be incredibly triggering,” Jaffe said. “It’s disgusting.”

Campus Safety is not able to intervene in issues that take place outside of NYU facilities. Security officers are instead trained to report incidents to the New York City Police Department.