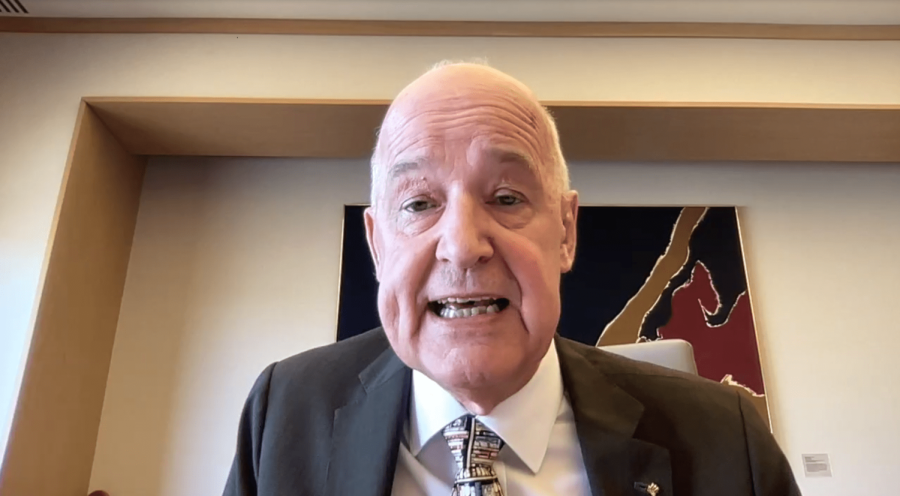 NYU president Andrew Hamilton addressed questions about mask wearing, the Russian invasion of Ukraine, campus safety and more at a town hall meeting on Thursday, March 3. The virtual event was moderated by Student Government Assembly chairperson Mehrin Ali.
On COVID-19 and mask wearing
When will the indoor mask mandate be lifted at NYU?

Carlo Ciotoli, the head of NYU’s COVID-19 Prevention & Response Team, said that the university would evaluate its indoor mask mandate following spring break. He said COVID-19 cases will be monitored as students, faculty and staff leave campus and return in the coming weeks.

“We are inching towards lifting it, but we are just not quite there yet,” Ciotoli said.

Ciotoli said NYU’s next step to loosen COVID-19 guidelines will be to allow students to eat at club meetings and events. NYU’s current event guidelines require participants to be masked.

While Ciotoli said the university might lift the mandate in the future, Hamilton said that mask wearing might become a common practice in the United States.

“I am quite sure that masks will be with us at NYU and in New York City for a very long time to come,” Hamilton said. “Even long before the pandemic, it was very common to see people wearing masks on the subway throughout Japan.”

Some universities in New York have already announced plans to lift indoor mask mandates. Ithaca College will end its mask mandate on Friday, March 4. Columbia University announced that its mandate will end on March 14.

Ciotoli encouraged students who are immunocompromised to continue to wear masks if NYU’s mask mandate is removed.

“I just want to highlight that by taking away the mask mandate doesn’t mean we are telling everyone you should stop wearing masks,” Ciotoli said. “I do want to strongly recommend that people continue to wear masks.”

Ciotoli said that the Daily Screener is still in place to document compliance with the vaccine mandate under the New York Hero Act. The act, which expires on March 17, requires employees to be screened for COVID-19 symptoms.
On students affected by the Russian invasion
How is NYU responding to students impacted by the invasion?

Hamilton said that the Russian invasion of Ukraine has prompted NYU to provide support for community members directly impacted by the crisis. He said there are 226 Russian students and 57 Ukrainian students across all NYU sites.

“​​This is a terrible situation that is unfolding in Ukraine,” Hamilton said. “It is one that affects everyone around the world. But it especially affects a very global university like NYU with a very international community of students, faculty and staff.”

Hamilton said several academic organizations, including the Presidents’ Alliance on Higher Education and Immigration and the Association of American Universities, are asking the federal government to provide aid to Ukrainian students who are living in the United States. The organizations are calling for temporary status protection, which would allow students whose home country is considered unsafe to live in the United States temporarily.

“As an institution, we stand ready to help our Ukrainian colleagues in Ukraine, our students and scholars from there, with financial support, with providing opportunities for them to continue their work at NYU, as other universities will do in different parts of the United States,” Hamilton said.

Josh Taylor, the associate vice chancellor for the Office of Global Services, addressed the concerns of many Russian students about being targeted by students and faculty due to the invasion. Taylor opposed comments — including remarks made by Congressman Eric Swalwell (D-Calif.) on CNN — suggesting that the United States should expel Russian students as a form of retaliation against Putin.

Taylor said the Office of Global Services would be ready to work with students to ensure they can return home if flights to Russia become harder to find.

“It’s really important for us all to remember that we should not assume that one’s nationality means that there’s automatic support for the actions taken by one’s government,” Taylor said.

How will the university financially support students struggling as a result of the crisis?

Ali discussed concerns raised by Russian students who have lost access to their bank accounts and are unsure of how they will pay tuition and cover other costs. MJ Knoll-Finn, the senior vice president for Enrollment Management and Student Success, said the university is preparing to address the financial needs of Ukrainian and Russian students.

“We have not seen a large increase in our Ukrainian nor our Russian students yet coming to us for financial relief, but we are prepared,” Knoll-Finn said. “We are partnering with senior leadership at the university, with trustees and with other generous donors to make sure that there are funds available to students if the need does arise.”

Knoll-Finn said a fund, similar to NYU’s Emergency Relief Fund, will allow the university to quickly distribute aid and resources to students who may be in need. According to Taylor, the Office of Global Services also has not seen a surge in requests from students for help leaving Ukraine, but he expects this to change in the coming months.
On campus safety for students
What is NYU doing in response to recent hate crimes on campus?

In the last month, there have been several reports of attacks and a swastika found at NYU. Hamilton said there has been a troubling spike in hate crimes targeting Asian students.

“We are in the center of a large city with a very complex and diverse community,” Hamilton said. “As I said, we take them very seriously indeed, but of course, they are situations that cannot be solved with one single act or one single office.”

Campus safety head Fountain Walker detailed how the department will install more security cameras east of Washington Square Park, add lighting to the scaffolding of university buildings and increase police presence around university buildings. This plan was also outlined in an email to the university community on March 2.

“Just understand that even with training, it takes time for us to get them to where we need to be,” Walker said. “Ultimately, their responsibility is not to address mental health or environmental health and safety. It is truly to get you, the victim, in a position where you can get the help you need as immediately as possible.”

Patti McSteen, the senior associate vice president and deputy of Global Campus Safety, shared her plans to focus on increasing communication with the student body. McSteen hopes to allow students to share their ideas about safety on campus to the department and create a student group to provide support for victims.

“What I’m really focusing on is having a holistic, empathic response to our students when they’re experiencing traumatic events, to rebuild the trust of our students and our community with the Department of Campus Safety, and to show support to the students who experience difficult situations, incidents of violence,” McSteen said.

Lisa Coleman, the senior vice president for Global Inclusion and Strategic Innovation, said the NYU Counseling and Wellness Services has recently hired a full-time counselor to work with students of color. The athletics department will also continue to hold in-person self-defense classes.

What is the communication process from the time of incident to when the student body hears about it?

“We’ve heard from our students that an important piece of reviewing our current reporting mechanisms is to make sure and ensure our students are clear about what the most direct and simplest ways are to communicate around emergencies,” Pina said.

NYU’s campus incident reporting system is in accordance with the Clery Act, a federal law outlining the types of crimes universities must report to students. Crimes listed under the act include murder, manslaughter, robbery, aggravated assault, rape and more. As residence halls near Union Square and Lower Manhattan are not located within the parameters of NYU’s Washington Square campus, they are exempt from the Clery Act.

“If we have enough information that says, ‘Yes, these are incidents that represent a continuing threat, regardless of whether they fit the strict geography or the strict definition of a Cleric crime,’ we’re going to send [an alert] out,” Roberto Pineda Sanchez, a senior compliance analyst for Campus Safety, said.

“Many universities in the United States have their own sworn, armed police forces,” Hamilton said. “NYU, in its correct wisdom, has decided that that’s not for it. We have a campus safety organization who have a very difficult job to do. It is made particularly difficult because they have no authority.”