How baristas at the Astor Place Starbucks are fighting to unionize

A Starbucks near NYU’s Washington Square campus has joined a national movement to unionize for increased pay and improved working conditions. 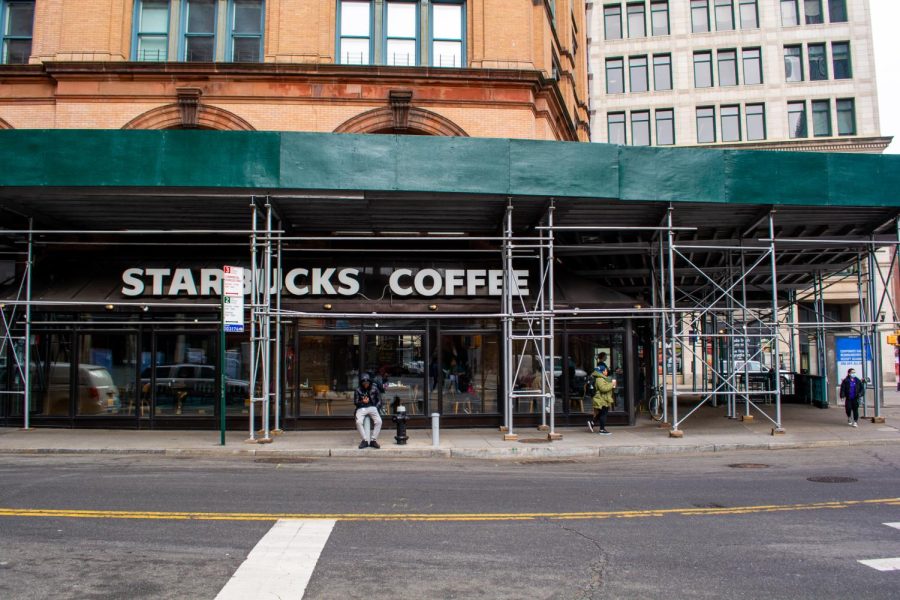 Workers at the Starbucks on Astor Place are fighting to unionize. These efforts come as workers across the country demand improved rights and protections at work. (Staff Photo by Manasa Gudavalli)

The Starbucks location on Astor Place has joined a surging national movement to unionize, uniting with two New York City and two Long Island Starbucks stores in a push for increased pay and improved working conditions. The Astor Place store announced its petition for union status to Starbucks president and CEO Kevin Johnson on Feb. 10.

The Astor Place Starbucks, located near NYU’s Washington Square campus, wants to initiate a vote to unionize on March 3, along with the other New York City and Long Island locations. Astor Place employees are seeking to address gender discrimination, insufficient worker protections, inadequate compensation and the challenges of COVID-19.

“A union can give us a voice,” said Rhythm Heaton, an employee at the Astor Place Starbucks. “These are realistic [demands] that we can negotiate with Starbucks, and I do hope and still feel optimistic that Starbucks will meet us in a good place to negotiate fairly.”

A Starbucks in Buffalo, New York, was the first store in the coffeeshop chain to unionize, joining the national labor union Workers United in December. The movement in Buffalo later formed its own national organization, Starbucks Workers United. A second Buffalo store then formed a union in January, becoming the next to win representation.

“Up until Buffalo, there generally has been an attitude in America, where — especially in the service industry — a union is a laughable idea,” said Heaton, who is also a leading member of the Starbucks Workers United Organizing Committee. “The way I see that right now, this is a chain reaction. This is going to affect a large range of employers and employees in our country.”

Since then, 103 of the 9,000 Starbucks locations in the United States have petitioned to unionize. The other New York stores that joined the unionization efforts include the Starbucks flagship Reserve Roastery location in Manhattan’s Meatpacking District, a store in Brooklyn’s Caesar’s Bay Shopping Center, and stores in Great Neck and Massapequa in Nassau County on Long Island.

Employees at Astor Place who are part of the Starbucks Workers United Organizing Committee cited unfair wages and a disregard for employee wellbeing as reasons to unionize. Starbucks refers to its employees as partners, but Astor Place employee Edwin Palma Solis said he feels like a robot instead. He expressed concerns about scheduling, saying he always tries to take on extra shifts.

“The union will better support us by making those changes to our hours and just being able to accommodate everyone’s health and mental health, so that we can for sure feel like we are partners for partners,” Palma Solis said.

Members of the union also said that unionizing can effectively address the unfair working conditions that have been worsened by COVID-19. According to Heaton, the pandemic has forced longtime employees to leave, increasing the rate of employee turnover.

“It’s a struggle living in New York City, and oftentimes, you’re just scraping by,” Heaton said. “A lot of these people are students who also have to do an immense amount of schoolwork once they get off work, and then coming into work tired, and then they have no money. It’s just frustrating.”

The Elmwood Buffalo location also proposed “Just Cause” legislation as part of its larger contract negotiations for unionization, as well as increased compensation when a store is operating with a decreased staff and limited restricted food and drink benefits. Right now, workers cannot get free food on any day that they are not working.

“A lot of people relied on that for their meals throughout the week,” said Steinhardt senior Mac Abraham, another member of the organizing committee at the Astor Place store. “They can just make these changes that we have no say in.”

Abraham said that although the managers at the Astor Place Starbucks have not expressed anti-union sentiments, some workers still fear union busting from the Starbucks corporation, and that a labor union would challenge the company’s protocols and treatment of workers.

“I wish that we lived in a society where we didn’t have to have unions to be treated like human beings in our workplaces,” Abraham said. “But unfortunately, that’s not the case. Big corporations don’t really value the workers on the floor who actually make the profits come in — they just want to see more profits for themselves and for the company in general.”