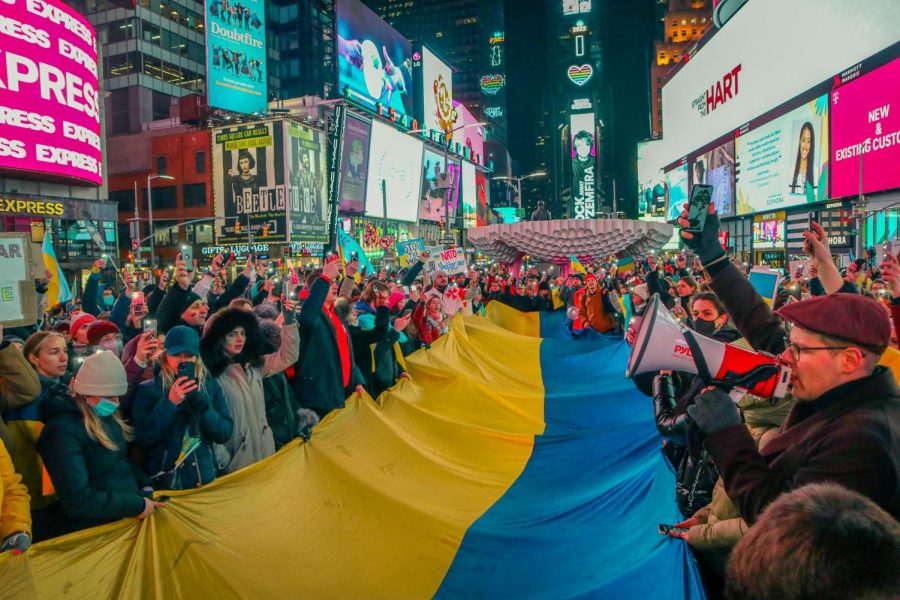 At Washington Square Park, about 200 protesters gathered around the fountain holding cardboard signs and Ukrainian flags. During the demonstration, the NYU Russian Club held a fundraiser and information booth.
City leaders speak at the Ukrainian National Home

“I wish I could provide words of comfort, but there is no comfort in war,” said Maloney, whose district includes the Ukrainian Village neighborhood of the East Village where the Ukrainian National Home is located. “I know that the Ukrainian resolve to decide their own destinies will not easily be extinguished, and I stand with and will continue to stand with this community and the people of Ukraine throughout this tragedy.”

Staten Island resident Iryna Rozdolska, who is Ukrainian, attended the event with her daughter. She said she is terrified for the safety of her friends and family in Ukraine, including her parents, who are currently unable to leave the capital of Kyiv.

“We are devastated,” Rozdolska said. “We are afraid of everything that is happening. We can’t believe that we’re speaking about this out loud, but we need to speak about this and we’re still processing and trying to do our best to help.”

Rozdolska said she believes Ukrainian soldiers are well equipped to fight Russian military forces on the ground but could not counter Russia’s air assaults. She called on other countries and NATO to help protect cities throughout Ukraine.

“We deem it unacceptable to maintain diplomatic relations with the aggressive state which openly attacks its neighbors without any reason,” Holubov said.

Rivera, the city council member representing the neighborhood, addressed the crowd and said that Ukraine has no help defending its citizens from the Russian assaults.

“Ukraine needs our world leaders to act now and show in no uncertain terms that the rest of the world is not only watching, but that we will stand resolute with Ukraine in the fight against Putin’s totalitarian rule,” Rivera said.

David Harris, the CEO of the American Jewish Committee, took to the podium to dispute Vladimir Putin’s stated aim of denazifying Ukraine. Harris argued that this process must take place in Moscow — a statement which drew cheers from the crowd.

“Take very seriously the first words of the Ukrainian national anthem,” Harris said. “Glory and freedom have not yet died in Ukraine, nor will they.”
Hundreds rally in front of Russia’s United Nations headquarters

Four hundred New York Ukrainians and allies protested outside of the Permanent Mission of the Russian Federation to the United Nations and expressed fear for friends and family on Thursday, Feb. 24. Protesters flew the Ukrainian flag and chanted the national anthem while holding signs reading “Stop the War” and “Putin, get your bloody hands off Ukraine.”

Some protesters carried the horizontally striped black-and-red flag of a Ukrainian far-right ultranationalist paramilitary group that massacred Polish people in the 1940s as part of an ethnic cleansing campaign and was established by an organization that pledged loyalty to Adolf Hitler during World War II.

Nearly all the flags at the protests, however, were the blue-and-yellow Ukrainian flag, a design that originated in the 19th century and was established as the country’s official flag in the early 1990s after the collapse of the Soviet Union.

Many demonstrators, such as 21-year-old Christina Bundziak, believe that the current sanctions on Russia are not enough, and called for a focus on saving Ukrainian lives.

“This isn’t a business deal — this is a humanitarian issue,” Bundziak said. “Ukraine has been and always will be its own nation. Ukrainian people are strong, and we’re not going to let Russia erase our history or culture.”

Sanctions on Russia from the international community have been reportedly effective in the past — the Russian economy has grown at an annual rate of 0.3% compared to the global rate of 2.3% since 2014 — but pose a risk of extreme inflation and stock market crashes.

Maryna Maiborado attended the rally to call for a stronger international response to the conflict, and she is worried about her family in Ukraine. She said she fears for the country if Russia captures Ukraine’s major cities.

“We’re really worried that Russia will impose its government in Ukraine, and it’s going to capture all of the major Ukrainian cities,” Maiborado said. “Countries should take a more strict stance on this whole situation, because this is literally happening at the doorstep of Europe. If Putin is not punished right now, he’s just going to keep going at it.”