The Daybook is WSN’s weekly column listing in-person and online events at NYU and across New York City. This week: watch a discounted Broadway show or join a conversation with Angela Davis. 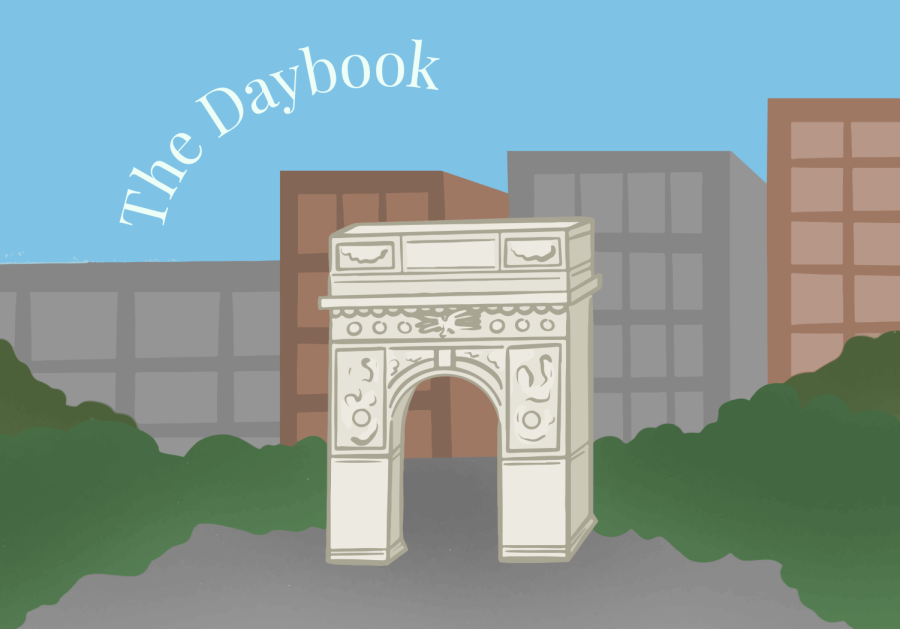 The Daybook is WSN’s weekly column listing in-person and online events at NYU and around New York City. (Illustration by Susan Behrends Valenzuela)

$56 per ticket, open to the public

Take a food tour across Greenwich Village and try the different cuisines that the city has to offer. New York Food Tours will guide you around the neighborhood for three hours as you try New York-style pizza, falafel and cannolis, to name a few of the included tastings.
A stand-up comedy show in Hell’s Kitchen
9 p.m. at 318 W. 53rd St.

$25 per ticket, two-drink minimum, open to the public

The Broadway Comedy Club is hosting its “All Star Stand Up Comedy” signature show in its main room. The event will feature comedians seen on Comedy Central, HBO and Netflix, including Matt Arevalo, Troy Bond, Vannessa Jackson and Drew Tessier.

A firework display and cultural festival will be held at Sara D. Roosevelt Park in Chinatown to mark the start of Lunar New Year celebrations. The event will include lion dances, food vendors and traditional activities to begin the weeklong holiday.
A clothing exchange in East Harlem
10 a.m.-2 p.m. at 1795 Lexington Ave.

Open to the public

Donate your old clothes and search the racks for a new wardrobe at the Sustainable Fashion Community Center. Up to 10 items can be brought home and any leftover clothes will be donated to Wearable Collections, Green Textile Recycling, thredUP and Donate NYC to be recycled or repurposed.

Join Angela Davis, an American political activist and prominent member of the prison abolition movement, and NYU professor Ann Morning for a discussion around utilizing Black History Month to challenge institutional systems of oppression. The talk will focus on the importance of diverse discourse about the Black experience in a global historical context.
A jazz show in downtown Brooklyn
7-11 p.m. at 471 Dekalb Ave.

$10 per ticket, open to the public

A march protesting the Beijing Olympics
3-5 p.m. at the Chinese Consulate at 520 12th Ave.

With the 2022 Beijing Winter Olympics set to begin Friday, Feb. 4, Students for a Free Tibet and Project Black Mask Hong Kong are hosting a global day of action to boycott Beijing hosting the Winter Olympics. The protest was organized in light of ongoing human rights issues in China. The protest will start at the Chinese Consulate at 3 p.m. before marching towards Times Square, where protesters will rally until 5:30 p.m.

Dress up in ski-house attire and dance the night away at a “Winter Wonderland” silent dance party. Music will be provided by three DJs from Quiet Events, a silent disco rental company. Headphones are provided for free.

Celebrate the Lunar New Year at Queens Botanical Garden with a variety of events, including a winter scavenger hunt, art projects, paper blossom crafts and lion dance performances. The event will conclude with a discussion with local artist Chemin Hsiao, whose exhibit, “Shapes of the Garden,” is being showcased until April 10.
A live recording of the SmartLess podcast
6 p.m. at the Kings Theater at 1027 Flatbush Ave.

Buy tickets in advance, open to the public

The SmartLess podcast is recording an episode live at Kings Theater on Saturday, Feb. 5. The podcast is hosted by Jason Bateman, Will Arnett and Sean Hayes and discusses the experiences shared between people from a variety of different backgrounds. In each episode, a host brings on a mystery guest, which have included Kamala Harris, Stacey Abrams, Billie Eilish, Lebron James and Tom Hanks.

A trip to a Broadway show
All day

Buy tickets in advance, open to the public

Broadway shows have again experienced low audience turnouts and continuous shutdowns due to the omicron variant. As COVID-19 cases begin to decline in New York City, watch a show before tickets begin to sell out. NYU’s Box Office offers discounted tickets on certain Broadway shows, such as upcoming showings of “Tina.”