The rezoning plan passed last month includes a last-minute change that allows university dorms to remain in the area. 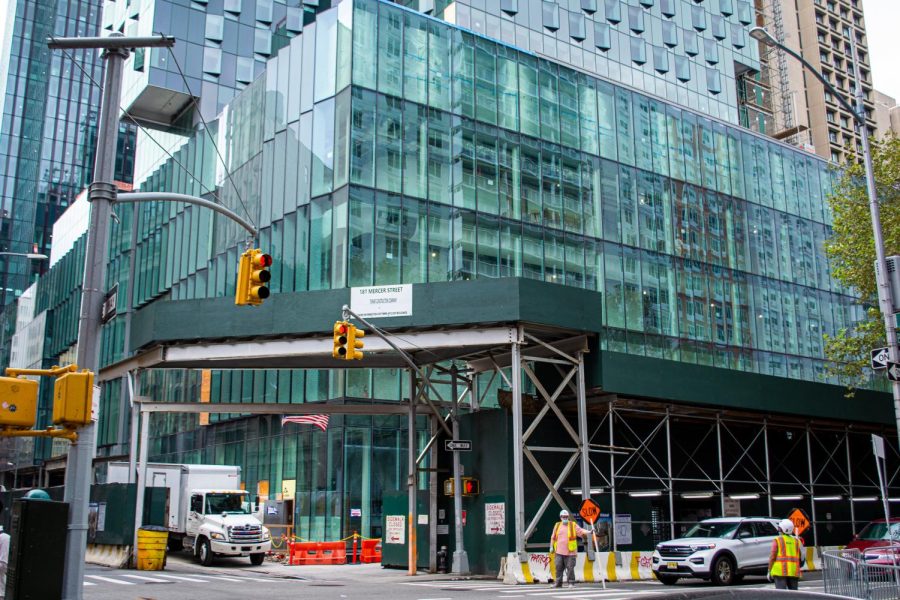 NYU will not halt construction on its 181 Mercer Street building, scheduled to open in fall 2022, after the SoHo and NoHo rezoning plan was approved last month.

The New York City Council passed the rezoning plan 43-5 on Dec. 15. In the final version of the plan, the 181 Mercer Street building was removed from the boundaries of the rezoned area and will not be affected by the legislation.

The rezoning plan aims to generate more housing in the area by removing residential constraints and increasing enforcement of rent-regulated homes. It also promises to increase the affordable housing supply in SoHo and NoHo and provide greater financial support for the arts and artists.

Mandatory Inclusionary Housing areas — which will create permanent, mixed-income affordable housing — will comprise 25% to 30% of new residential floor areas. Due to a lack of city-owned land available for affordable residential space, MIH guidelines will be applied to private development sites and any lot with at least 12,500 square feet of residential space.

A day before the approval, there was a last-minute modification that prohibits colleges and universities from locating in SoHo and NoHo, but permits university residence halls and fraternity and sorority houses.
On 181 Mercer Street, Morton Williams and a public school

The 181 Mercer Street building includes student and faculty housing and is part of NYU’s Core Plan — a modified version of the NYU 2031 Plan. It has been a point of controversy among SoHo and NoHo residents who oppose the university’s expansion.

University spokesperson Lynne Brown wrote in an email to WSN that NYU supports the rezoning and believes it will not have an effect on the university’s construction plans.

“With regard to the new City zoning regulations, while NYU thought the City was correct in looking to rezone an area that was still zoned ‘manufacturing’ despite the changes of the last 50 years, we did not take a position on specific elements of the plan,” Brown wrote in the email. “Since NYU has no pending plans for dormitories or classrooms in that area, we do not anticipate there will be any appreciable impact on our future plans.”

This past November, NYU’s expansion plan gave the School Construction Authority permission to build a public school at an NYU-owned Bleecker Street plot at the corner of LaGuardia Place. The school, designated to address the needs of students with disabilities, is set to have five floors.

The proposal to build the new public school has received strong support from Democratic state senators Brian Kavanagh and Brad Hoylman, but they have criticized the plan for displacing the local Morton Williams supermarket currently located on the plot.

The supermarket serves about 3,000 customers per day, according to owner Avi Kaner. There was a plan for a supermarket to be located at the bottom of 181 Mercer — potentially the Morton Williams. However, university spokesperson Shonna Keogan told WSN on Dec. 8 that the new building would not have space for a supermarket.

“With regard to 181 Mercer Street, this new building is now entirely earmarked for sorely-needed academic and athletic facilities, as well as student and faculty residential space,” Keogan said in a statement to WSN.

Brown said that the SCA’s last-minute decision to build a school has complicated plans for the supermarket’s future.

“This provision was put in place over a decade ago, giving the SCA an option to place a K-8 school on the site,” Brown wrote in an email to WSN. “NYU provided two extensions, the latest expiring December 2021 … We are, however, mindful that a grocery store is an important amenity and we look forward to meeting with the School Construction Authority to learn more about their plans and timing for the site.”
On community opposition to rezoning
Although the rezoning plan looks to create affordable housing and resources for artists and other current SoHo and NoHo residents, executive director of Village Preservation Andrew Berman believes it might fail to do so.

“Even with the changes we fought hard for it still makes the construction of new affordable housing on most of the sites where the plan predicts it taking place highly unlikely,” Berman wrote in a statement to WSN. “It does however make it very easy and likely that a great deal of new luxury housing will be built, and that oversized chain stores and oversized new buildings will proliferate in the neighborhood.”

In May 2021, many organizations spoke out and sponsored a protest against the rezoning plan, including the Bowery Alliance of Neighbors, the Broadway Residents Coalition, the Chinatown Working Group, the East Village Community Coalition, Human-Scale NYC, the Lower East Side Preservation Initiative, the SoHo Alliance, the Tenants Political Action Committee and Village Preservation.

Laura Sewell, the executive director of the East Village Community Coalition, criticized the original plan for failing to acknowledge the needs of small businesses. She added that the most recent rezoning plan will limit the ability of private universities to expand and build in SoHo and NoHo.

“We’ve seen over and over again that upzonings encourage the destruction of historic buildings, along with existing rent-regulated affordable housing,” Sewell wrote in a statement to WSN. “We expect seniors, Asian-Americans, and the artists who made these neighborhoods so unique to be displaced by this plan, along with local independent businesses.”

In May, the SoHo Alliance filed a lawsuit against the rezoning plan, but it failed. A new group called the Coalition for Fairness in SoHo and NoHo believes it has a higher chance of challenging the project after the plan is passed.

As of press time, the group had raised $221,928 of its $400,000 goal on its GoFundMe page. The funds are intended to cover any expenses necessary to oppose the city’s rezoning plans, starting with hiring a lawyer.

Correction, Jan. 28: A previous version of this article incorrectly reported the boundaries of the new rezoning area. The article has been updated to reflect the correction and WSN regrets the error.