After WSN reported on claims of food poisoning last month, more students have come forward with accounts of unsanitary conditions in NYU dining halls — including cockroaches and rodents. 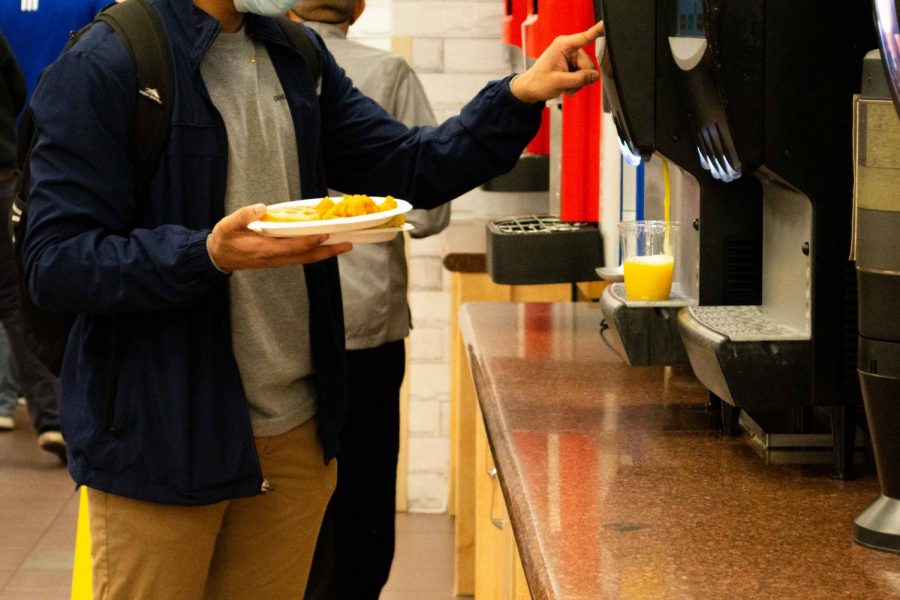 NYU serves over 100,000 meals a week and has denied reported cases of food poisoning. (Staff Photo by Jake Capriotti)

Adithya Rachakulla was picking up a meal at the Third North dining hall when a cockroach fell into his food and crawled through his plate before diving onto the floor.

“He came out of the corner,” the CAS senior said. “I was like, ‘holy fuck,’ because it was a pretty big one, too.”

Rachakulla immediately went to an NYU Eats employee, who took a picture of the insect, removed it and washed the floor.

He is one of several students who have witnessed insects or rodents at NYU dining halls in the past two weeks. CAS first-year Miriksha Thakuri was eating with her friends at Downstein on Dec. 7 when she heard shrieks. When she looked down, she spotted a small rodent running across the floor.

“Hearing stories like this just does not make my vision of the dining halls better,” Thakuri said. “And it makes me question — do they clean and do they treat food correctly and safely for us to eat? Because for some of us, it’s the only place that we can receive food. It’s important.”

NYU responds to food poisoning allegations
In November, WSN reported on three students’ claims of getting food poisoning from the Palladium dining hall. None had filed formal reports with the university; at least one interviewee said they did not know where to report a food safety concern.

The next day, NYU dining services emailed students with active meal plans, referencing the WSN story and assuring them that the food at dining halls is safe.

“NYU Dining reached out to the three students mentioned in the WSN’s Nov. 22 article after the piece ran (none of these students filed a report at the time of the alleged incident), and we conducted a thorough investigation based on the menu items, dates and locations they ate at,” NYU spokesperson Shonna Keogan wrote in a statement to WSN. “Our investigation showed there were no other reports of stomach ailments connected to where and what these students consumed.”

Keogan also told WSN that in the first week of December, NYU was notified of another suspected case of food poisoning, but said an investigation found no other student complaints related to the food in question. NYU has not received any official reports of food poisoning since.

CAS senior Cindy Edward became ill after eating at Palladium and had to check herself into the emergency room, as WSN reported in the November story. In its most recent New York City health inspection in 2019, Palladium was cited for the presence of filth flies and the improper refrigeration of food.

Following WSN’s reporting, Dennis Lestrange, vice president of operations at NYU Eats, asked Edward to schedule a meeting with himself and the director of quality assurance at NYU Eats, Clifford Mondesir.

Edward said that the subsequent conversation felt like a waste of time since the staff members persuaded her to return to Palladium instead of directly addressing her trip to the emergency room. When she mentioned her hospital visit, Edward said the NYU Eats staff said that it was unfortunate, but refused to continue the conversation further.

“I asked why they are even OK if people have gotten sick,” Edward said. “Then he told me that they’re going to have a breakfast thing where people with and without meal plans could come and eat. I just expressed how I think that’s not a good idea considering they haven’t been inspected and three people have gotten sick. They say it’s a small number, but honestly, anything more than one is too many.”

CAS first-year Ahla Khan, who also became ill after eating at Palladium and was featured in the Nov. 22 story, appreciated that NYU Eats reached out to her, but said she was skeptical that NYU’s dining halls will improve.

“I just hope that some changes can be made in order to prevent future food-related problems in the dining halls and that students can enjoy their food without having to worry about what can happen to them,” Khan said.
‘But hey — what can you do’
Some students are less worried about getting sick from dining hall food. Tisch first-year Sydney Hirai said that although NYU dining does not have the best rankings, the food is better than at other colleges. Hirai described her experience with NYU dining as “pretty positive — maybe a hair or two, but hey — what can you do?”

And while SPS junior Jacob Shaughnessy said he did not know much about food safety on campus, he said he thought NYU was doing the best it could.

“It’s not my favorite food to eat in the world,” he said. “Obviously, everyone here is trying to save money, so that’s a plus, but I’m sure there are some things we could all be doing better. Sometimes it tastes like cardboard, sometimes it doesn’t.”
Dining hall food safety uncertain
When Tisch junior Sofia Mahdavi ordered a sandwich at the Third North dining hall last week, what she received was more like charred bread. Although she said she would typically eat anything edible, Mahdavi was physically unable to eat what remained of her sandwich — it was hard as a rock. She said it was not the first time she has been served a similar sandwich at Third North.

“Little things like that can be frustrating,” Mahdavi said, adding that she had gotten food poisoning twice from the University Hall dining facilities. “We spend so much money.”

Despite reporting multiple instances of food poisoning, Mahdavi said she doesn’t have any negative views of the staff.

“I always get sick, but I found the staff is so nice and accommodating,” she said. “I don’t know what NYU is giving them to work with.”

However, students are still concerned about food safety on campus. Since 2019, NYU Eats has faced criticism from students due to inadequate quarantine meals, lack of affordability and failed health inspections.

“I had a really upset stomach for a number of days,” Mahdavi said. “We shouldn’t have to be afraid that the food we pay for is going to make us sick.”

Keogan asked that students report any illness that they think may be related to eating at an NYU dining facility by emailing [email protected] or calling 212.998.4900.