The NYU trustee and Steinhardt school namesake was ordered to turn over 180 stolen antiquities after a four-year investigation by the Manhattan district attorney. 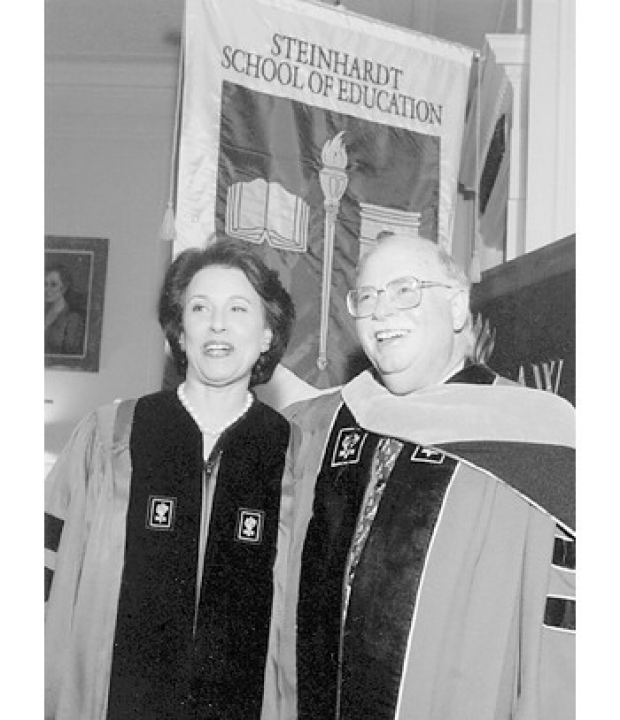 Michael Steinhardt and his wife, Judy Steinhardt made two $10 million donations to the NYU Steinhardt School of Culture, Education, and Human Development in 2001. Michael Steinhardt was ordered to surrender 180 stolen antiques worth $70 million on Dec. 6 and received a lifetime ban on acquiring artifacts. (Image via nyu.edu)

Michael Steinhardt, after whom the Steinhardt School of Culture, Education, and Human Development is named, was ordered to surrender 180 stolen antiquities worth $70 million on Dec. 6. The Manhattan district attorney announced the action after a four-year investigation into his criminal conduct. Steinhardt also received a lifetime ban on acquiring artifacts.

“Michael Steinhardt displayed a rapacious appetite for plundered artifacts without concern for the legality of his actions, the legitimacy of the pieces he bought and sold, or the grievous cultural damage he wrought across the globe,” Manhattan District Attorney Cyrus Vance Jr. said in a press release. “His pursuit of ‘new’ additions to showcase and sell knew no geographic or moral boundaries, as reflected in the sprawling underworld of antiquities traffickers, crime bosses, money launderers, and tomb raiders he relied upon to expand his collection.”

Steinhardt, a hedge fund billionaire and philanthropist, will not face any criminal charges for obtaining antiques that were looted and illegally trafficked from 11 countries by 12 smuggling networks. The investigation looked into Steinhardt’s acquisition, possession and sale of over 1,000 antiquities since at least 1987.

The investigation began after the district attorney’s office determined that Steinhardt had illegally purchased a 2,300-year-old Bull’s Head statue, which was loaned to the Metropolitan Museum of Art during the Lebanese Civil War. Many of the seized relics were taken from countries amid periods of war and civil unrest, according to prosecutors.

“​​Mr. Steinhardt is pleased that the District Attorney’s years-long investigation has concluded without any charges, and that items wrongfully taken by others will be returned to their native countries,” the statement read. “Many of the dealers from whom Mr. Steinhardt bought these items made specific representations as to the dealers’ lawful title to the items, and to their alleged provenance. To the extent these representations were false, Mr. Steinhardt has reserved his rights to seek recompense from the dealers involved.”

In 2001, NYU changed the name of the Steinhardt school from the NYU School of Education after two $10 million donations to the school from Michael Steinhardt and his wife, Judy Steinhardt.

“When we invest in education, we make a statement about us as a society,” Steinhardt said at the 2001 ceremony renaming the school. “I make that statement through this school.”

The university came under scrutiny when it chose to retain the Steinhardt name for its school in 2019 after six women who were unaffiliated with NYU accused Michael Steinhardt of sexual harrassment. ​​The NYU investigation found “several instances of unacceptable remarks containing offensive language used by Mr. Steinhardt in front of or in talking to members of the NYU community.” Despite these findings, Steinhardt remains in a non-voting Life Trustee position on NYU’s board of trustees.

In recent years, pressure has risen for Western nations to collect and return stolen artifacts to their places of origin. The Manhattan district attorney’s office alone has returned 717 objects to 14 nations since August 2020, including ​​a gold coffin stolen from Egypt in the aftermath of the 2011 Egyptian revolution.

“Even though Steinhardt’s decades-long indifference to the rights of peoples to their own sacred treasures is appalling, the interests of justice prior to indictment and trial favor a resolution that ensures that a substantial portion of the damage to world cultural heritage will be undone, once and for all,” Vance said.

An NYU spokesperson did not immediately respond to a request for comment.

Update, Dec. 7: This article was updated to include a statement from Michael Steinhardt’s lawyers.