The School of Professional Studies at NYU will shut down its Comprehensive English Program at the end of this semester — a move that faculty say will effectively eliminate the entire English Language Institute. 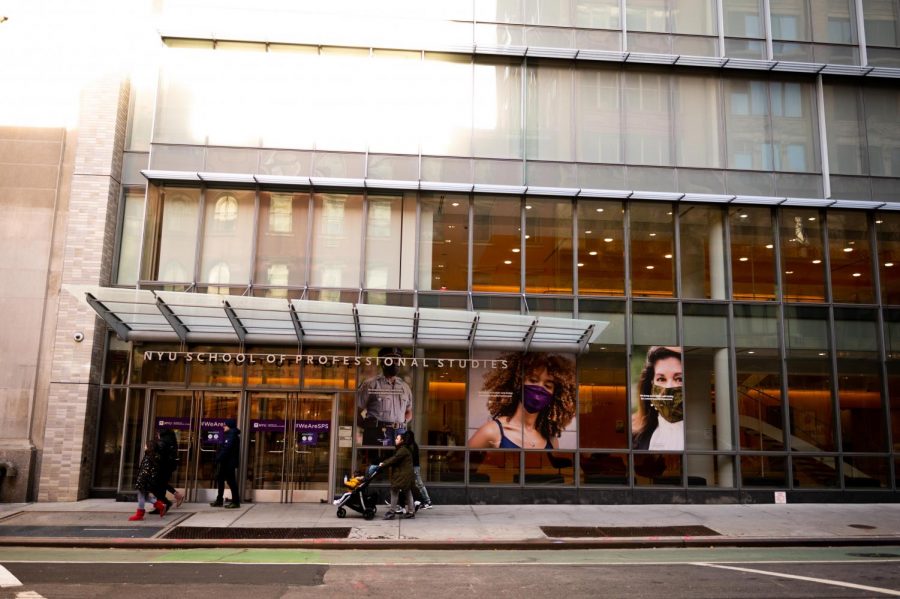 The School of Professional Studies at NYU is shutting down the English Language Institute at the end of the semester. The closure will result in dozens of staff layoffs and the loss of English programs which serve international students. (Staff Photo by Jake Capriotti)

The Comprehensive English Program at NYU’s School of Professional Studies will be shut down at the end of the fall 2021 semester, according to an Oct. 1 statement from SPS dean Angie Kamath. SPS administration has described the closure of the program, which catered to international students learning English as a second language, as part of a “restructuring” of its English Language Institute.

While administrators said the decision was due to low enrollment, several faculty members alleged that SPS undermined the program by restricting its availability and implementing budget cuts.

As a result of the shutdown, 11 out of 12 full-time faculty will only remain employed until the end of their contracts on Aug. 31, 2022. Raúl Sánchez, the one full-time faculty member keeping his job, will move to a different unit within SPS.

“Even if this one remaining faculty member wasn’t there, I see no reason why they could not reconstitute the ELI in another form,” said Shant Melkonian, an ELI instructor. “This is how decisions should not be made. This is a cautionary tale for other programs.”

The restructuring of the ELI has also resulted in the loss of employment for adjunct faculty. Multiple staff members told WSN that, as recently as 2016, more than 50 adjuncts were employed by the institute. Some have received contracts in other departments of the university, while others are out of a job after being terminated in summer 2021. No adjuncts are currently employed by the ELI.

In a statement to WSN, SPS assistant dean Paola Curcio-Kleinman attributed the closure of the program to insufficient enrollment and revenue over the past five years. She said revenue decreased by 95% and enrollment by 82%.

ELI faculty members, however, claim that the decline in enrollment was due to a concerted effort by the SPS administration to shut down the institute.

Enrollment had previously dropped after a 2017 announcement by then-dean Dennis Di Lorenzo that students outside of SPS would no longer be allowed to take ELI courses. Following this change, enrollment dropped from about 1,800 NYU students during the 2016-17 academic year to 166 students at present, a decrease of about 91%.

WSN spoke to a number of current and former faculty who attributed the decline in enrollment to this change as well as cuts to the department’s marketing budget. They characterized SPS administration’s decisions as part of a deliberate effort to reduce enrollment and stifle the operations of the ELI.

The CEP shutdown comes after 10 ELI adjunct faculty were terminated in summer 2021. Cate Fallon, a Tisch adjunct and the unit chair for ACT-UAW Local 7902, the union for NYU adjuncts, said that professors were only allowed to teach one course per term and received small severance packages from the university because, due to the pandemic, adjuncts worked fewer hours than normal in the year used to calculate severances.

“In May you get a reappointment for your next year,” Fallon said. “But in May, they were told, ‘You’re not coming back.’ Had the university made this choice in the summer of 2020, instead of 2021, these people would have gotten a much larger payout because they were teaching more courses. It’s like they took advantage of the pandemic.”

Kleinman encouraged ELI students currently enrolled in CEP to utilize the resources like the SPS International Student Support Center, the University Learning Center and the Office of Global Services after the program closes at the end of the fall 2021 semester.

“NYU students, who had previously depended upon the English Language Institute for English Language learning, have opted to use the wide range of other services offered by their own schools and the university at large,” Kleinman said in a statement. “In addition, an increase in programs across New York City, the U.S. and online have provided students from outside of NYU with other study options to improve their English.”

Elisabeth Fay, a clinical associate professor in the CAS expository writing program and an organizer with Contract Faculty United at NYU, a union for contract faculty that has not been recognized by the university, does not believe that other English services are as useful to international students as the ELI.

“We are not ESL-trained teachers, we are composition teachers,” Fay, who is also a writing center consultant, said. “You cannot just plug in any writing teacher and expect the same result, especially when you are taking away the support of a class, the support of a program and just sort of telling people, ‘I don’t know, go to the writing center.’”

Many ELI faculty members also worry that other services are insufficient for students learning English as a second language. An ELI faculty member, who asked to remain anonymous due to a legal obligation, said that professors in NYU programs outside of the ELI are not properly trained to teach English to non-native speakers.

Steinhardt sophomore Fengze Wang, an international student from Shanghai, said the ELI has benefitted her socially and academically by teaching her to read, write and fluently speak English. She found a sense of community through the institute that she said she would not have been able to find elsewhere.

“I don’t know how, in the future, some foreign students who want to study English in the U.S. will be able to,” Wang said. “I don’t know where they will go. If it was not for ELI, I would not have been here.”

A version of this article appeared in the Dec. 6, 2021, e-print edition. Contact Gabriel Hawthorne at [email protected]