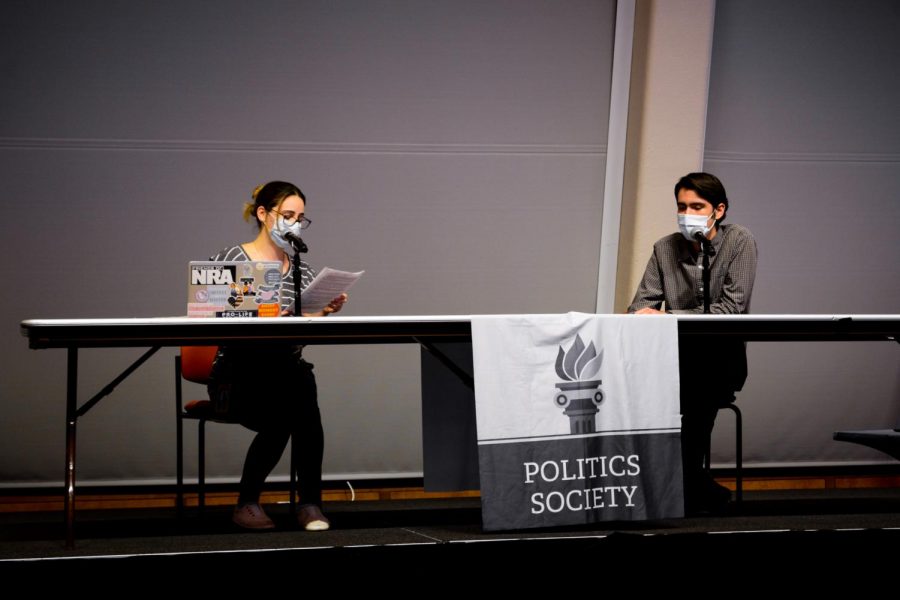 At a debate hosted by the NYU Politics Society on Wednesday, NYU’s College Democrats and College Republicans faced off over for-profit prisons, higher education funding and drug decriminalization. Afterward, they could not even agree on whether they agreed on anything.

Elina Rodriguez, the president of the College Democrats, denied any agreement between the clubs.

“The NYU Democrats debaters did not agree with the NYU Republicans on any topics,” Rodriguez said. “In no way do the views of our debaters align with those of the Republicans.”

“Democrats and Republicans both want what’s best,” Guzzo said. “We just have different ideas of how to get there.”

In past years, the biannual debate was also open to a campus libertarian group and the NYU chapter of the Young Democratic Socialists of America. According to Politics Society president Izzy Vieira, YDSA was not invited since the libertarian club is no longer active.

“We didn’t want to skew the debate too far left,” Vieira said. “We actually are open to a YDSA versus Democrats debate.”

In their opening statements, both clubs clarified that their arguments are not representative of the club or party as a whole.

“When you have corporations which make money putting people in prison, that’s bad business, and that should not not be allowed,” Parrott said.

Parrott and Walker discussed a variety of criminal justice topics and agreed that the justice system should focus on rehabilitation.

Both speakers agreed that corporate campaign contributions can create an unfair justice system. But Walker questioned whether political donations from private prisons would lead to higher incarceration rates.

Shashank Shamshabad argued for the College Democrats that free higher education should be provided to low-income students, while Leila Hatami argued for the Republicans that it is not the government’s responsibility to provide free tuition.

Biden promised to fund free college education amid the rising student debt crisis, but the plan was never finalized.

“I think it’s better if we shift our perspective and think about how we can better allocate the money that would hypothetically be allocated to free tuition to better education,” Hatami said.

The two also clashed over the economic feasibility of free tuition. Shamshabad argued that students who cannot pay for college deserve increased financial aid or free college. Hatami claimed in response that free education is too expensive for taxpayers to fund.

“This is the real world,” Hatami said. “I don’t know if you guys know this, but Biden actually cut out his free tuition plan and took it out of the spending bill. I think that tells us something that maybe it’s not feasible.”

Republicans have challenged the Democrat-led push for drug decriminalization on the state and federal levels. Thirty-one states and the District of Columbia have decriminalized cannabis use. Oregon has decriminalized the possession of small amounts of any drug.

Enzo Repetto argued for the Democrats that addiction should be treated as a health crisis, and that people should not be jailed for the possession or use of drugs. Guzzo said that while addiction is a serious issue, people who choose to use an illegal substance should be punished.

“It is fully their decision to feed the addiction rather than obtain warranted mental health care,” Guzzo said. “Making a poor choice knowing it will cause harm is called intent. Intent to cause harm to themselves and others around them is a crime and therefore users should be criminalized.”

Repetto and Guzzo disagreed throughout the decriminalization discussion, which ranged from addiction treatment to releasing people convicted for drug possession.

Guzzo told WSN she had not expected to debate whether people should be able to use drugs safely.

“What I thought the main argument was going to be from them was that drug use is an addiction and that addiction is not a choice and therefore shouldn’t be a crime,” Guzzo said. “I was very surprised to hear arguments that sounded like, ‘Do drugs.’ They were more so supporting the use of drugs in moderation and using drugs safely.”

Repetto said that his argument pushed for urgent reforms already in progress.

“These were dire reforms that my opponent seemed to have been in favor of halting,” Repetto said. “I believe I succeeded in communicating why our attitudes and our approach to drugs under this broken system must change, and I enjoyed the stark policy and rhetorical contrasts that this debate brought out.”

The next such debate will be hosted by the Politics Society during the spring 2022 semester.