The university moved from No. 43 to No. 29 in The Princeton Review’s list of “Top 50 Green Colleges,” which is based on environmental sustainability surveys. 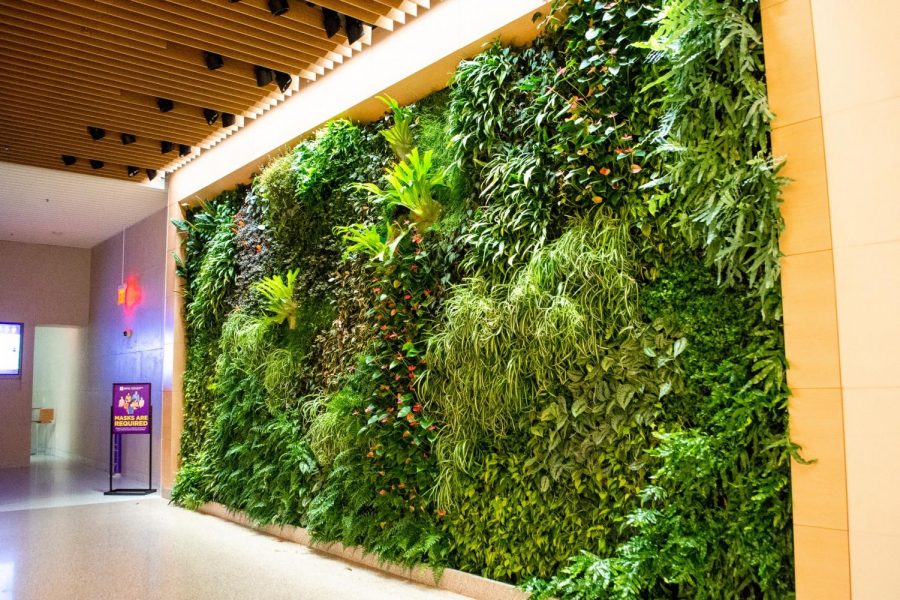 A new greenery wall is installed in the lobby of 708 Broadway, home to the NYU School of Global Public Health. Recently, NYU has improved from 43rd place to 29th place on The Princeton Review’s “Top 50 Green Colleges.” (Staff Photo by Manasa Gudavalli)

The Princeton Review asked NYU administrators about the university’s ecological footprint, which is tracked in accordance with the Association for the Advancement of Sustainability in Higher Education’s ranking system. In addition to NYU’s Gold rating from the AASHE, The Princeton Review based its ranking on student opinion surveys conducted in 2020 and 2021.

“Credit is due to just about every school and unit for their contributions,” Scheib said. “NYU has at least 20 academic degrees and over 600 courses focused on sustainability. Sustainability research also earns points, and many NYU faculty across multiple schools are leaders in their fields.”

Since releasing its first Climate Action Plan in 2009, the university claims it has reduced carbon emissions from campus buildings by 30% since 2007. This year, the Office of the Provost funded its first round of sustainability research projects through the All-University Climate Change Initiative, which offers grants to students, faculty and staff for climate-related research and other university projects. The university aims to reduce “building emissions intensity” by 50% by 2025 and to achieve carbon neutrality by 2040.

Christopher Schlottmann, a clinical professor and administrator in NYU’s Department of Environmental Studies, said it is important that rankings like The Princeton Review take environmental education in university curricula and research programs into account.

“It would be wonderful if NYU doubled and tripled its efforts to support environmental teaching and research, in the spirit of becoming ‘one of the greenest urban universities,’ as President Hamilton aspires to,” Schlottman wrote in a statement to WSN. “The scale of our environmental challenges should be reflected proportionately in NYU’s efforts.”

Schlottmann noted that disruptions caused by the pandemic — which led to a global drop in carbon emissions last year before the use of fossil fuels increased this year — offer NYU an opportunity to explore new ways to shrink its carbon footprint. He added that the university could consider the long-term use of remote attendance to maintain the progress it made during the pandemic.

Emma Hancock, a CAS first-year and member of Sunrise Movement NYU, said that despite the many programs NYU touts as improving its sustainability, green rankings often fail to look beyond surface-level sustainability measures.

“We can add as many bike spaces or as many reusable containers as we want, but if we keep supporting oil companies that are fracking and tearing up our environment presently, how much change does that really make?” Hancock said. “What I think that The Princeton Review, and probably everyone, needs to consider is that their overall emissions need to include what they support with their money and their endowment as well, because that’s also a part of the campus.”

Sunrise NYU revived a campaign for divestment in October, calling on the university to end investments in the fossil fuel industry. In 2016, NYU President Andrew Hamilton and board of trustees chair William Berkley wrote that divestment “is neither the only nor even among the most impactful steps NYU can take to address the underlying issue: atmospheric CO2 and climate change.” However, the university appears to have changed its stance on the subject. Hamilton announced in a town hall meeting on Nov. 17 that the university has since ended direct investments in fossil fuels and is looking to end any indirect involvement.