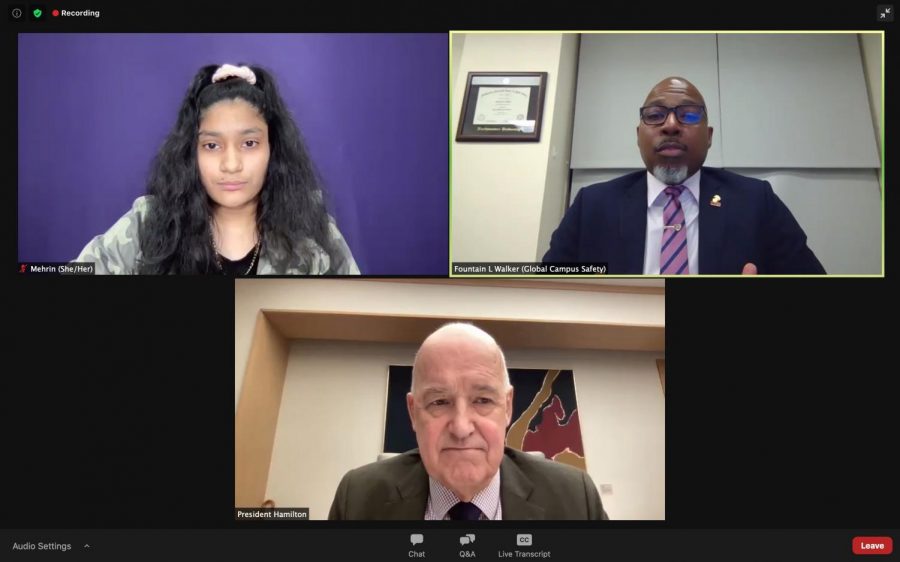 The Zoom meeting was moderated by student government chairperson Mehrin Ali. Senior administrators responded to questions related to their fields of expertise.

WSN has published a selection of questions from students and administrators’ responses to them. Questions have been edited or paraphrased for length and clarity.
On safety and security
Hamilton was joined by campus security chief Fountain Walker to address safety concerns — including the recent bomb threats received by NYU and other American universities, an intruder harassing two students at Lafayette Hall, and the September shooting of a student at NYU’s Brooklyn campus.

Many students feel dissatisfied with the way Campus Safety has communicated with students when there are safety incidents. Is Campus Safety changing its approach?

Walker said that Campus Safety uses a multi-layered approach of communication contingent on the situation and severity of the incident. Some incidents, like the bomb threats, are out of Campus Safety’s control and in the jurisdiction of the New York City Police Department.

What changes to security protocol have been made after the shooting at the Tandon School of Engineering and the bomb threats?

Walker said that NYU responded to the shooting at Tandon by increasing the number of security officers on and around campus and facilitating communication between officers and university leadership.

Following the shooting, NYU also became a member of the new MetroTech Public Safety Committee, a local collective aiming to make the neighborhood of the Tandon campus safer. Security representatives from institutions in the area meet monthly and issue policy recommendations.

There were a lot of questions about the intrusion incident at Lafayette Hall that WSN reported on last week. What should students do if they don’t feel safe in NYU housing facilities?

“Our officers followed the protocol,” Walker said. “They did what they were supposed to do —  they engaged a supervisor. At some point we engaged the NYPD, who also responded. There’s this notion that the officers are going to maybe grab, jump, we don’t do any of that, especially if somebody looks like a student.”

“We all have a responsibility — faculty, staff and students — to not make their job even more difficult than it is,” Hamilton said. “Not to sneak someone in. It puts the public safety officer in a very difficult position and potentially a very damaging career-ending position.”
On relaxing COVID-19 restrictions
Dr. Carlo Ciotoli, the executive lead of the COVID-19 Prevention & Response Team, discussed plans for the university’s health restrictions regarding classrooms, student life and student absence policies for the upcoming spring 2022 semester.

Will there be a consistent policy for NYU events in terms of who is allowed to attend and what activities are permitted?

“Even our own case counts on campus are ticking up a bit,” Ciotoli said. “Now with that said, we began to loosen certain restrictions throughout the semester.”

Earlier this semester, the university began allowing students in residence halls to host other NYU students as visitors. Ciotoli said that other rules may soon be relaxed, including the two hour time limit for events.

Attendees were also informed of the New York City Department of Health’s current guidelines on COVID-19 vaccine booster shots. A recent change made every resident of the city eligible for a booster shot.

What should students do if they are experiencing COVID-19 symptoms, but their professor is not offering an excused absence?

Academic affairs vice-provost Georgina Dopico responded, encouraging students in this situation to contact the dean of their respective schools for support.

“The university and the school deans’ offices have communicated to faculty the importance of students being able to stay home if they feel sick, and not having to provide a doctor’s note,” Dopico said. “I don’t know that we’re able to address every single contingency that can cause a student to miss class but certainly if they’re feeling symptomatic, they should stay home. Faculty have been told that.”

If students are sick or need to take a mental health day, will online classes be offered next semester?

Dopico said that the university must provide ways for students absent from classes to keep up with work remotely. However, she added that offering Zoom classes isn’t a “one-size-fits-all” solution, and that some students would benefit from alternate accommodations.

Hamilton said that the university had been as “flexible as we possibly can” with student and faculty circumstances over the past 18 months, but did not offer specific examples.
On the struggle to improve affordability
Admissions vice-president MJ Knoll-Finn highlighted NYU’s achievement of meeting the class of 2025’s full tuition needs. She also responded to questions about how the university will ensure financial support for the rest of its student body.

Will NYU meet the full financial need of a student throughout their academic career?

Knoll-Finn said the university is seeking ways to increase its financial aid for students in need throughout their time at NYU.

WSN reported on Nov 15. that NYU met the demonstrated financial need of every student of the class of 2025, and that it expects to continue to do so in future admissions cycles.

Why are transfer students ineligible to receive scholarships unless they come from a community college?

“We would love to be able to offer financial aid to all students who are coming in as new students to NYU,” Knoll-Finn said. “But right now, we don’t have the budget to be able to do that.”

The undergraduate admissions office has been working with the student government to find ways to better support transfer students, according to Knoll-Finn. New initiatives being planned include access programs and partnerships with community colleges.

Knoll-Finn announced that NYU’s financial grants have increased by 60% since 2016, and Pell Grant eligibility has increased by 24% among this year’s first-year class.

Columbia University has three universitywide food pantries, while NYU doesn’t have any. Will there be a point where NYU has them too?

While school-based food pantries exist, student government chair Ali acknowledged that there is not a university-wide one.

Hamilton welcomed the proposal for a universitywide food pantry, and shared resources to combat food insecurity that are already available on campus, such as the Courtesy Meals program, which provides free short-term assistance to students experiencing food insecurity by giving $75 of dining credit to any student who requests it.
On divestment from harmful investments
The town hall discussed the demand for NYU to end their investments in fossil fuels and private prisons amid the revival of the Divest NYU campaign.

Does NYU have any plans to divest from the fossil fuel and private prison industries?

Hamilton said in response to pressure to address climate change, NYU has withdrawn direct investments in fossil fuels and is working to end indirect involvement.

“Currently, NYU’s endowment has no direct investments or ownership of public securities of companies whose business is the exploitation of fossil fuels,” Hamilton said. “We have some legacy investments made many years ago in the private equity arena. In the next few years we will be completely withdrawn. We have about 1% in our private funds and 1% in private equity, but these are not direct ownerships.”

According to Hamilton, NYU is in the process of withdrawing from these private investments, which may take years to do so.

“That’s not something that happens overnight.” Hamilton said, “It takes several years, but in the next few years, we will be completely withdrawn.”

NYU is aiming to reach carbon neutrality by 2040 and a 50% reduction by 2025. Hamilton said that the university is achieving this sustainability goal by renovating Brittany Hall and Rubin Hall to become some of the most energy efficient dorms in the country, as well as extending the same goal to its developments at 181 Mercer and 370 Jay Street.

Do you think you could clarify more about NYU’s relationship with private prisons?

Hamilton said that NYU has no investments in private prisons.

“We have no interest and there is no engagement in investing in private prisons.” Hamilton said.

Sunrise NYU, a prominent student group advocating for the university to divest its endowment from the private prison and fossil fuel industries, has claimed that NYU has investments in private prisons, but has not offered evidence. Members of the organization did not immediately respond to WSN’s requests for clarification.

Hamilton referred to the NYU Prison Education Program, which provides free college courses to Wallkill Correctional Facility’s incarcerated and formerly incarcerated students. The program was suspended due to COVID-19 restrictions, but Hamilton is enthusiastic about reviving it.

“I look forward to getting back to going up to Wallkill to participate in a graduation ceremony for the incarcerated men there who have reached the incredible achievement of graduating from their associate degree program,” Hamilton said.