The Student Workers of Columbia-UAW union enters its third week of striking to bring Columbia University back to the bargaining table. 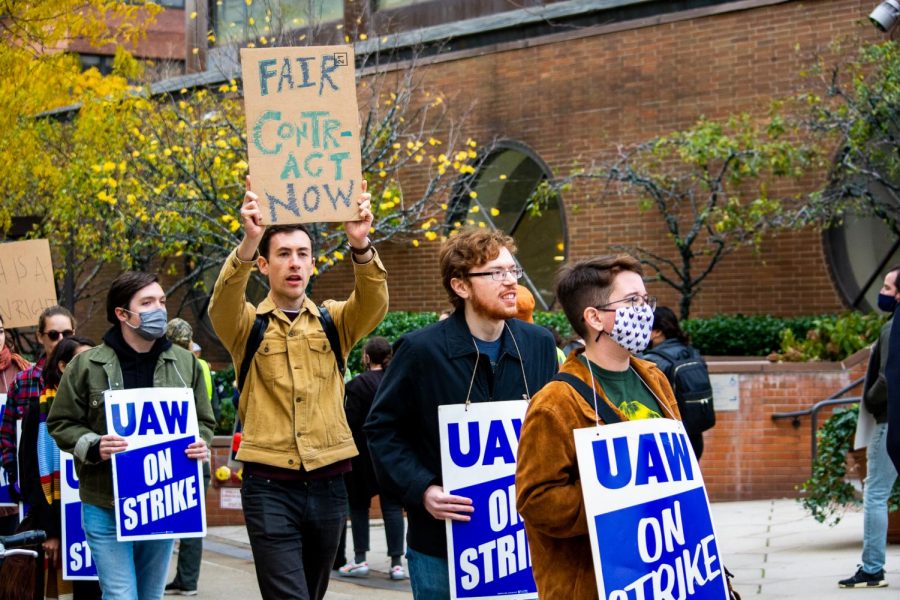 Student workers at Columbia University marched on a picket line. They advocated for a better contract with improved working conditions and benefits. (Staff Photo by Manasa Gudavalli)

For the last two weeks, Student Workers of Columbia-UAW have been on the picket line to demand that Columbia University return to the bargaining table and agree on a fair labor contract. They are calling for a living wage, adequate healthcare and a third-party mediator to protect student workers from all forms of harassment.

SWC-UAW represents more than 3,000 Columbia undergraduate and graduate student workers. The union was previously known as Graduate Workers of Columbia-UAW, but was renamed in July to reflect the membership of undergraduate workers. After a strike that lasted from March 15 to April 2, the workers voted on a tentative agreement with Columbia on April 30.

The tentative agreement, however, was rejected by union members by a vote of 1,093 to 970 on April 30. According to SWC-UAW, the proposed contract did not meet the union’s current demands, including expanded healthcare coverage and protection from harassment.

The union’s current strike was prompted by a change Columbia made to worker stipend payment methods after the spring 2021 strike. Rather than receiving stipends in lump sums per semester, student workers are currently receiving their stipends twice a month. The union said that, as a result of this change, student workers each started the semester with $8,000 less than expected while Columbia accrues interest on the withheld wages.

“By changing our pay structure without any warning at the beginning of the semester, it is a financial strain that I know a lot of people have had to put serious thought into,” said Abby Breuker, a second-year Ph.D. student in Columbia’s Graduate School of Arts and Sciences.
Student workers call for renegotiated contract

The strike is currently the second-largest strike in the United States. The workers’ demands include a $26 an hour minimum wage with an annual increase of $1.50, dental and vision coverage as health benefits, and a neutral arbitrator for harassment cases between a student and the university.

Becca Roskill, a senior at Columbia’s School of Engineering and a member of SWC-UAW’s bargaining committee, said that though she is only contracted to work 10 hours a week, she often has to work overtime to complete all of her work as a teaching assistant in the computer science department.

In a statement, Columbia Provost Mary C. Boyce said the university has proposed increasing hourly wages to $19 an hour, and $21 an hour for those who work for at least three years. The union does not believe the proposed wage is sufficient.

Thomas Preston, a sixth-year graduate student, works two jobs and is an assistant instructor for a literature class of 22 students. He said that in order to earn a livable wage, he had to take on additional jobs outside of the university.

“​​The time I should be spending doing research, I am spending earning money because I can’t make ends meet,” Preston said. “I’m at Columbia, but I’m not here able to do what I came here to do.”

Dental and optical appointments are also not covered under the current healthcare plan, according to the union. A fifth-year international Ph.D. student in the physics department, who preferred to remain anonymous due to safety concerns, said that dental care is unsustainably expensive in the United States.

“I had to wait to go home to Italy during the pandemic to get my wisdom teeth taken out because I could not afford it here,” the student said. “Another wisdom tooth started hurting and I did not want to go get it checked out. Now I’m going to wait it out until I can go home.”

Sarah Leonard, a second-year Ph.D. student in the School of Nursing, suffers from fibromyalgia and chronic migraines and believes that she would benefit from increased healthcare coverage. She said that the cost of treating her conditions is making it difficult for her to focus on work.

“Stress makes everything worse, and it is very difficult trying to balance figuring out how much everything is going to cost, taking care of myself and also getting my work done so I can get out of here and make more money,” Leonard said.

SWC-UAW is demanding that neutral arbitration be included in a new contract to protect students from harassment in the workplace. Harassment cases are handled through the Office of Equal Opportunity and Affirmative Action. Roskill and other students believe the office is frequently unfair to victims.

“​​Often survivors don’t even get to see the evidence that was put forward in their case and don’t get to understand the rationale behind the decision,” Roskill said.
Student workers will strike until an agreement is reached
Before the picketing began, the union planned a walkout to “leverage the threat of strike.” While teaching his “Freedom of Speech and Press” class on Oct. 27, Columbia president Lee Bollinger was interrupted by approximately 500 student protestors who entered the classroom chanting “No contract, no work.”

WSN spoke with 10 striking student workers who were affected by the loss of income and missed teaching their students. Columbia retains the legal right to withhold payments from student workers for the days they participate in the strike.

“What do we want? Contract! When do we want it? Now!” was one of many slogans chanted by student workers who gathered in front of the Jerome L. Greene Science Center on Nov. 10.

“It feels truly great to be a part of a larger labor movement that is necessary for our field and for all professions,” said Venya Gush Chin, a second-year graduate student in the Department of Slavic Languages.

Student workers said they are prepared to continue striking until Columbia returns to the bargaining table. The union plans to picket daily for the rest of the week.

A version of this article appeared in the Nov. 15, 2021, e-print edition. Contact Gabriel Hawthorne at [email protected]