NYU security took over an hour to arrive when two Lafayette residents reported a stranger in their room harassing them and refusing to leave. This was the second time that the intruder was snuck into the dorm by the same hall resident. 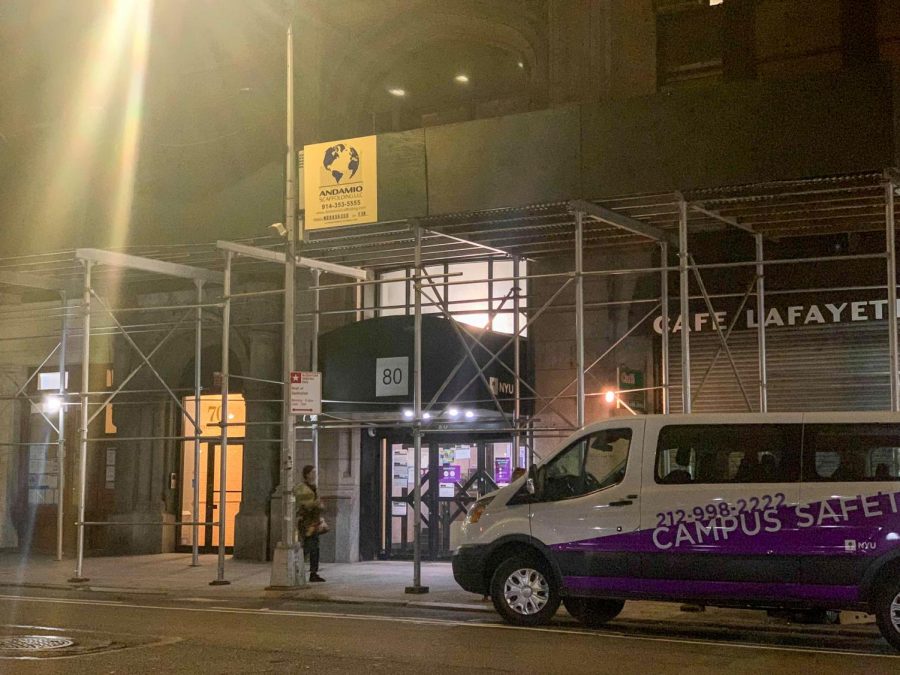 A break-in occurred at a room in Lafayette Hall on Wednesday, Nov. 3. After the incident was reported to dorm authorities, it took over an hour for security to arrive and remove the intruder. (Staff Photo by Alex Tran)

An outsider not affiliated with NYU gained unauthorized access to Lafayette Hall and harassed two residents in their room on Nov. 3. After the incident was reported to dorm authorities, security did not arrive for over an hour. During this time, the intruder refused to leave, made sexually suggestive comments and laid down in one of their beds.

The intruder had previously been banned from the building after the same Lafayette resident who assisted them in entering the building last week snuck them in two years ago, according to a senior Lafayette staff member.
A knock on the door
At 8:30 p.m. on Nov. 3, CAS sophomore Mariana Trimble and junior Maya Orey, who share a suite at Lafayette Hall, were making dinner when a girl knocked on their front door.

[Read more: ‘Can I lay in bed with you?’: How a stranger got into my dorm room]

“We opened it, and this girl was there who asked for feminine hygiene products and if she could use our bathroom,” Orey told WSN. “Operating under the assumption that she lives in the hall and is an NYU student, we let her in and let her use the bathroom.”

Trimble and Orey wanted to be good neighbors, but they soon began to suspect that the person in their dorm wasn’t an NYU student at all. Both noticed that details provided by the intruder didn’t add up — she claimed to be a Tisch student experiencing roommate troubles, but did not seem to know that Tisch is an arts school.

Trimble and Orey said they made the intruder a meal and tried to comfort her. Trimble then left the living room for a few minutes, leaving Orey alone with the stranger. At this point, the girl began making sexually suggestive comments.

“She started commenting on my appearance and inquired about my sexuality, and then asked if I would lay in bed with her,” Orey said. “It definitely put me on edge. I texted Mariana, ‘This situation is really weird. I’m not sure if she goes to NYU.’”

The intruder then left the room, saying she was going to “resolve her roommate problem.” Trimble and Orey called their neighbors, Gabriel Murjani and Ryan Chan, over to their room since they felt unsafe about the possibility of the intruder returning.

She did return, some time later, after Murjani and Chan had arrived. She continued to make comments that made Trimble and Orey uncomfortable, became aggressive with a third neighbor who asked her to leave the room and then fell asleep on one of their beds.

Chan suspected that the intruder passed out because she was intoxicated.

“She was definitely on drugs,” Chan said. “I don’t know what kind, but she was really out of it and she brought two cigarettes when she was in the room.”
A delayed response
At approximately 10 p.m., Trimble, Orey and their neighbors began contacting their residence assistant and the NYU Campus Safety officer on duty in the Lafayette lobby. The security officer, who was already aware of an intruder in the building, had notified NYU Housing’s Incident Response Team.

WSN learned that NYU had also called the New York City Police Department when the intruder was first seen sneaking into the residence hall. Neither NYU security nor the police succeeded in finding the intruder, and appeared to have ended their search by the time Trimble and Orey contacted Campus Safety.

“​​When the NYPD arrived, they were unable to locate the intruder,” NYU spokesperson Shonna Keogan wrote to WSN. “The two [Campus Safety officers] who came up as back up toured the building and were also unable to determine her location in the building.”

Although some of the dorm’s RAs responded sooner, it took over an hour for NYU’s dedicated response team to arrive.

In emails obtained by WSN, a senior Lafayette staff member told Trimble that Campus Safety took longer than usual to arrive because they were busy responding to other incidents around campus. The staff member did not specify which incidents they were referring to.

“They had to pull away from existing concerns to make their way to Lafayette,” the staff member wrote. “It was an issue of competing-priorities and distance I’m afraid.”

Murjani said he asked the security guard who the intruder was and how she entered the building.

“The security guard said she wasn’t from NYU at all,” Murjani said. “He said he tried to stop her from entering, but since he couldn’t leave his post and he couldn’t use physical means, he wasn’t able to do anything about it.”


Keogan said that CCTV footage showed an unidentified Lafayette resident sneaking the intruder past security in the lobby. In his email, the senior Lafayette staff member mentioned that the same Lafayette resident snuck the same person into the residence hall two years ago, and they had already been banned from the building.

A Lafayette administrator later told Orey that the intruder “escaped” after campus security escorted her to the Lafayette lobby.

Chan believes that more security guards should be present in residence halls to assist students faster, especially in buildings like Lafayette that are disconnected from the center of NYU’s campus.

“When the trespasser eventually got in and started looking at all the dorms, the security guard at the front door couldn’t do anything,” Chan said. “A second security officer who can actually move around would be more helpful.”

Keogan said the infiltrator has been declared persona non grata and that campus security has been instructed to remain vigilant.

Mariana Trimble is a contributor to WSN’s opinion page. She wrote her own account of the incident in a separate article and did not view this article prior to publication.