The New York Taxi Workers Alliance began its hunger strike at City Hall on Oct. 20. They are protesting against a proposed debt relief plan that they say will hurt drivers more than it will help them. 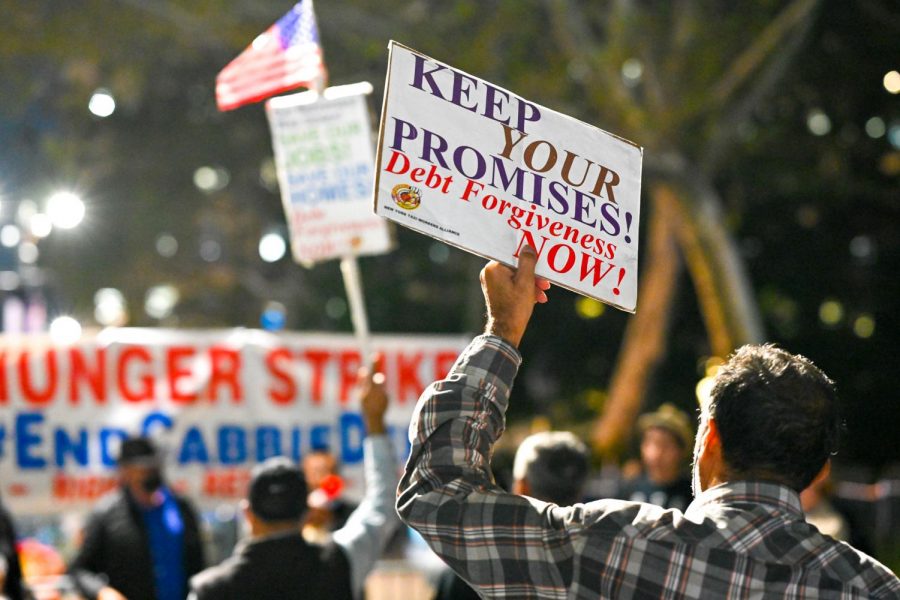 Members of the New York Taxi Workers Alliance are on strike, protesting exploitative licensing regulations and calling for debt relief. The union began an indefinite hunger strike on Oct. 20 outside of City Hall. (Staff Photo by Sirui Wu)

Members of the New York Taxi Workers Alliance, the union representing taxicab drivers in New York City, gathered outside City Hall on Wednesday night to mark the beginning of a hunger strike. Approximately 150 cab drivers and supporters called on the city to improve its debt relief plan for drivers.

The strike marks day 32 of cab drivers rallying outside of City Hall to protest Mayor Bill de Blasio’s $65 million Medallion Relief Program passed by City Council. The NYTWA’s criticisms of the plan range from a perceived lack of transparency to the absence of a cap on interest rates, which they say may lead to drivers paying an extortionate amount to lenders.

“For thousands of drivers across New York, this is a matter of life and death,” ​​Bhairavi Desai, NYTWA’s executive director, wrote in a press release. “We will not sit back and let the city consign us to a lifetime of poverty and death in a debt trap. We will be in the streets until we get what’s owed: a city-backed guarantee on medallion debt that allows for real relief.”

Taxi drivers need to purchase a permit called a medallion to drive an independent cab in the city. But when ridesharing services were first permitted to operate in the city in 2014, the taxi market crashed and the price of the medallions decreased dramatically, leaving the average driver with half a million dollars of debt.

“I cannot spend more time with my family,” Islam said. “I have to work 50 to 60 hours just to make the minimum wage. We all have huge loans, and we can’t afford that, and the city knows that. We are here to solve the problem.”

The NYTWA is demanding that lenders restructure drivers’ debts, the government incentivize debt restructuring, foreclosed medallions be returned to drivers and restitution be given to medallion owners over the age of 62 whose retirement plans were affected by the market crash.

Dorina Voiculet Nitescu attended the strike in honor of her husband, a taxi driver who died at 64 before the pandemic. She said the bank took away their medallion, but she continues to pay his loans.

“All our lives working — everything is gone,” Nitescu said. “The broker and the city work together and do all of this mess for us. My husband, a couple of years ago, was driving a cab, and he had no lunchtime, no bathroom and he had diabetes. He had a heart attack and had open-heart surgery. He could not do the job anymore.”

Afnan Haq, a member of NYU’s chapter of the Young Democratic Socialists of America, said he attended the strike to support taxi drivers in their fight for basic needs.

“It’s a clear, unbelievable injustice that exists in New York right now,” Haq said. “Taxi drivers are literally New York. The fact that this medallion is still bringing so many of our drivers down is an unthinkable injustice. I hope they win.”

Richard Chow, the brother of a taxi driver who died by suicide, is now a steadfast advocate for the NYTWA. Speaking at the rally, he told strikers to not settle for anything less than what they felt they deserved.

“They shot us with a gun and they are fixing us with a bandaid,” Chow said. “That is not the solution.”