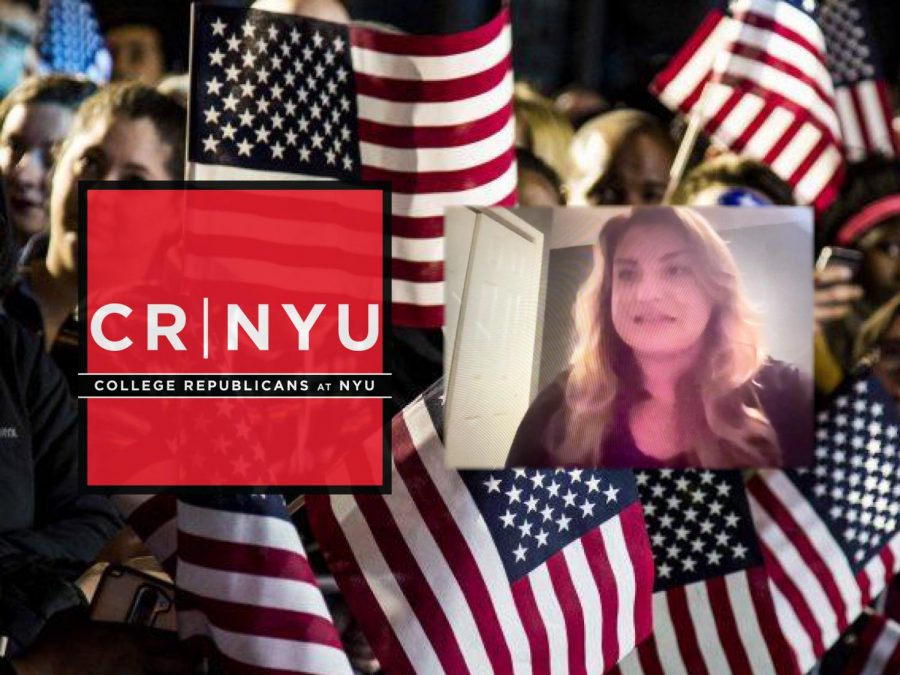 At a meeting with NYU’s College Republicans, Katie Bloodgood, the New York state director of the Republican National Committee, said she empathizes with GOP supporters at NYU.

“My nephew graduated from NYU a couple months ago,” Bloodgood told the College Republicans. “I tried to give him some Republican gear, since he’s a Republican, and he’s like, ‘I can’t wear that around here. My friends and I are all Republican, but we don’t talk about it with anyone.’ We don’t even know who to talk about it with, so I feel for you guys so much.”

The group hosted Bloodgood at a virtual event on Oct. 13 that ran for an hour and drew around 10 attendees. The College Republicans asked for Bloodgood’s thoughts on a range of topics, from ways to get involved with the Republican Party in New York to the impact of the state’s recent legalization of cannabis.

Bloodgood previously served as the Minnesota events director for Donald Trump’s 2020 presidential campaign. She also worked as a staffer for Rep. Scott Garrett (R-N.J.) from 2012 to 2017. After Garrett lost re-election in 2016, Bloodgood turned her attention to the swing state of Minnesota, where she worked for Rep. Jason Lewis (R-Minn.).

Being Republican at NYU

Many attendees at the meeting reported feeling as though liberal and left-leaning members of the NYU community ostracize Republican students and avoid political dialogue.

“They try to cancel you,” one student said. “They try to invoke things like political correctness or your comments come off as offensive to them. They try to not only silence your voice but also try to not have this conversation at all.”

Bloodgood said she felt saddened by the students’ situation and recalled her time attending Boston University, where she said she was the only Republican in many of her classes. She recommended that students focus on staying positive and advised them to try to find common ground with their political opponents.

“There’s some people that, no matter what, you talk to them and they’re just going to be angry and yell and shut you down,” Bloodgood said. “Don’t ever stoop to their level, and don’t ever yell. If they want to yell at your face, just let them go.”

Bloodgood told the students that even beyond college campuses, Republican voices are sometimes misunderstood.

“I do not advertise that I’m Republican until we have a little bit of discussion, and they get to know me a little. Then I’ll drop the R-bomb.”

“We’ve seen it over the years — conservative speakers who, if you actually listen to them, aren’t that controversial,” Bloodgood said. “There are a couple that are a little naughty — I’ll admit it. We all have some very far fringe people on both sides of the aisle.”

Bloodgood then suggested how Republican students should tell others that they belong to the political party.

“I do not advertise that I’m Republican until we have a little bit of discussion, and they get to know me a little,” Bloodgood said. “Then I’ll drop the R-bomb.”

Bloodgood said that Democrats focus too much on the character of their opponents and often forget their own policy platforms.

“Democrats try to make it about a personality and try to find a bogeyman,” Bloodgood said. “Republicans have generally been very good at running on policy, and I think this 2022 midterm is going to be focused more on policy than personality.”

“The American people are smart enough to know they can’t just keep running with ‘orange man bad,’” she added, referring to criticisms of former President Trump.

When it came to New York City’s upcoming mayoral election, Bloodgood expressed her support for “stunt-loving” Republican candidate Curtis Sliwa while admitting the improbability of his victory.

“Curtis is definitely entertaining, and I definitely get a kick out of him,” Bloodgood said. “And he is focusing on the crime issue, which I think, regardless of if he wins or not, people are going to remember that he was ringing the alarm bell.”

Questions of crime and prison reform

Crime rates and prison reform were also discussed at the meeting. One student expressed concern over a perceived rise in crime since “the Floyd riots.” Another student asked about the impact that future Republican victories in New York would have on criminal justice reform.

“If we get enough Republicans in New York, you think they could reverse that no-bail policy?” the student asked. “I think that’s the reason we are having all the crime.”

The student was referencing a law passed by the New York State Assembly in 2019 that sought to cut down on pretrial detention in New York jails by barring the use of cash bail in most misdemeanor and nonviolent felony cases. Following backlash from critics who warned of an increase in crime, the law was amended in 2020 to expand the range of crimes for which a judge can impose cash bail.

“I did believe there needed to be reforms in the criminal justice system,” Bloodgood responded. “Then the Democrats went 20 yards beyond that, and that’s when you got the bail reform bills that are letting people out that need to be in some type of mental care or prison.”
“Legalization of weed is a time bomb. They’re gonna be selling it in candy stores pretty soon.”
Despite New York City Police Commissioner Dermot Shea and Mayor Bill de Blasio’s assertions that reform policies led to a rise in crime rates, experts found no evidence that similar bail reform policies lead to increased violent crime.

Another student brought up New York state’s recent legalization of recreational cannabis, which provides for those previously convicted of marijuana-related offenses to have their criminal records expunged.

“Legalization of weed is a time bomb,” the student said. “They’re gonna be selling it in candy stores pretty soon. Once the kids turn 16, this guy’s gonna say, try one, try one.”

Hosted by an anti-vaccine advocate

The Bloodgood event was hosted by Steinhardt senior Gianna Guzzo, vice president of the College Republicans at NYU. During the 2021 summer break, Guzzo penned a 10-page letter titled “Ethics Complaint” to NYU administrators alleging that the university’s COVID-19 vaccination mandate is unlawful.

“You must change your policy that blatantly segregates and attacks a vulnerable population of the NYU community,” Guzzo wrote in the complaint, which she also sent to WSN.

At the time she wrote the letter in July, Guzzo said she believed over one million people would die as a result of taking the COVID-19 vaccine. She cited VAERS, a U.S. government-run database of adverse vaccine events that has been misused by anti-vaccine activists in attempts to dissuade the public from taking COVID-19 vaccines. However, the source linked in her complaint was OpenVAERS, a private organization that is not affiliated with VAERS. The official VAERS platform itself, according to its website, is “not designed to determine if a vaccine caused a health problem.”

WSN interviewed Guzzo in August, days before the Food and Drug Administration announced full authorization for the vaccines. Guzzo said she did not know if she would rescind her complaint upon FDA authorization, and maintained that personal beliefs for adults should still be respected with any vaccine.

“I think any vaccine being offered to students should be optional and it is a medical right to receive the vaccines or not,” Guzzo told WSN. “Asking for my vaccine status is a violation of my HIPAA rights.”

HIPAA rights are frequently invoked by anti-vaccination advocates despite the fact that the medical privacy legislation does not, in fact, prohibit questions about vaccination status.

Universities regularly require proof of vaccination for infectious diseases, and experts say that vaccination requirements are a crucial component of campus safety during the pandemic. In response to a lawsuit brought by eight students represented by James Bopp Jr., a well-known conservative lawyer, the U.S. Supreme Court refused to block Indiana University’s vaccine mandate.

According to an event page on NYU Engage, the College Republicans’ next featured guest will be National Rifle Association representative Jackie Emslie, who will join the club’s Zoom meeting on Oct. 27 to promote two of the NRA’s trademarked classes, “Refuse to be a Victim” and “Women on Target.”