Repair delays forced a switch to disposable dinnerware at dining locations on campus, NYU said. Students are unsure, though, of how to sustainably dispose of single-use items. 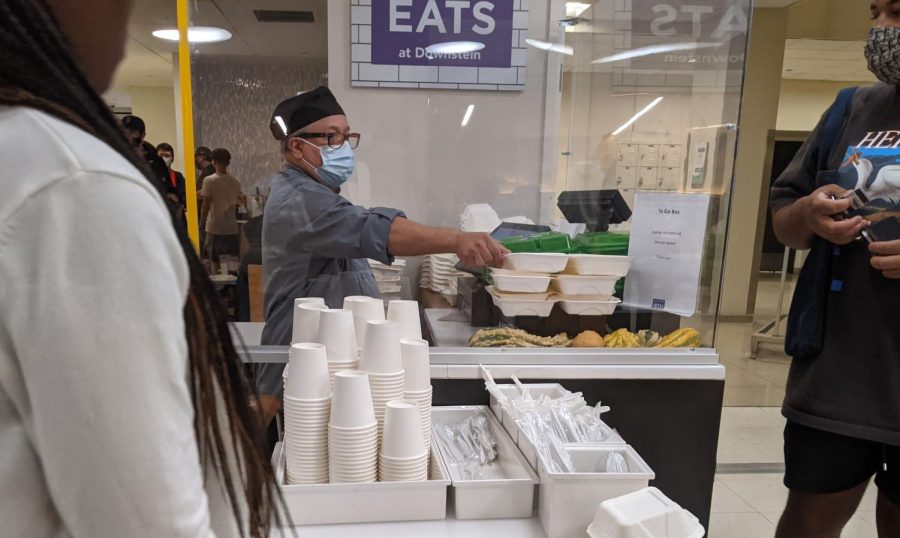 NYU Eats has switched to disposable dishes and silverware due to manufacturing constraints caused by COVID-19. The change has led to questions about sustainability on campus. (Photo by Naomi Mirny)

Supply chain issues triggered by the pandemic have forced two NYU dining halls to temporarily switch to disposable silverware. The Palladium dining hall is providing students with compostable single-use plates and cutlery while the university waits to replace a broken industrial dishwasher. The Third North dining hall also faced a similar issue after dishwasher parts were delayed in shipping, but has since returned to reusable dinnerware.

While some students originally believed that the shift to disposable dinnerware was due to concerns over the spread of COVID-19 in dining halls, university spokespeople told WSN that it was another consequence of the pandemic that caused the switch.

Global supply chains, including manufacturing, storage and shipping flows, have been severely disrupted by the pandemic. For customers with broken appliances like NYU’s dishwashers, the delays have often meant waiting weeks or even months for new parts to arrive from overseas. NYU fixed a broken dishwasher at Third North, which was out of order for weeks, but said it will have to replace the Palladium dishwasher entirely over winter break.

Responding to concerns over the sustainability of single-use utensils, university spokespeople Shonna Keogan and Beth Kwon said that NYU Eats has taken measures to ensure the dining products it uses are sustainable.

“All disposable single-use containers, cutlery and cups we use are made from renewable and reclaimed resources and are 100% compostable,” Keogan wrote to WSN. “I’m also happy to report that, in the interest of reducing waste, we have (re)introduced Ozzi reusable containers for take out in Third North and Downstein this fall.”

In addition to Third North and Palladium, NYU’s retail stores like Jasper Kane Cafe and the Marketplace at Kimmel use the same disposables. Coffee shops like Peet’s Coffee and Starbucks, which have NYU Eats franchises on campus, use branded compostables — except Dunkin’, which Keogan said the university is “working on transitioning.”

Kwon said the university has also taken steps to ensure the correct disposal of compostable materials. Students are encouraged to drop their dining waste in the 47 compost bins located across the Greenwich Village campus.

“Some of these are located at the front of the house where the diners can access them, and others near the dish return and at the back of the house where the kitchen staff can easily reach them for food waste,” Kwon said. “Food waste and compostable containers from student meals, as well as compostable scraps from kitchens, are collected regularly by NYU’s waste hauler, Action Carting.”

Despite the number of compost bins spread across campus, some students have found it a challenge to locate them when they are needed.

“I don’t know where there are any compost bins and I haven’t seen them anywhere,” said CAS first-year Grace Kibbe. “At home I always compost, but here I haven’t been able to find anywhere to put my food waste, so it usually just goes in the trash, unfortunately.”

Winter Jung, another CAS first-year, said that it is “not easy at all” to compost on campus and that she hasn’t seen any compost bins since getting to campus.

Students also reported concerns about the disposal of dining waste after eating in their dorm rooms — particularly after finishing delivery meals, which tend to produce large amounts of trash.

“Composting at NYU hasn’t been very convenient for me, there aren’t any compost bins in the dorms,” says Lee. “When I am done with my plate of food … I throw it in the trash because that’s mainly the only option.”