Calling on world leaders to take action during this year’s United Nations Climate Week, the New York City chapter of the youth-led climate-advocacy group Fridays For Future organized a strike on Sept. 24. 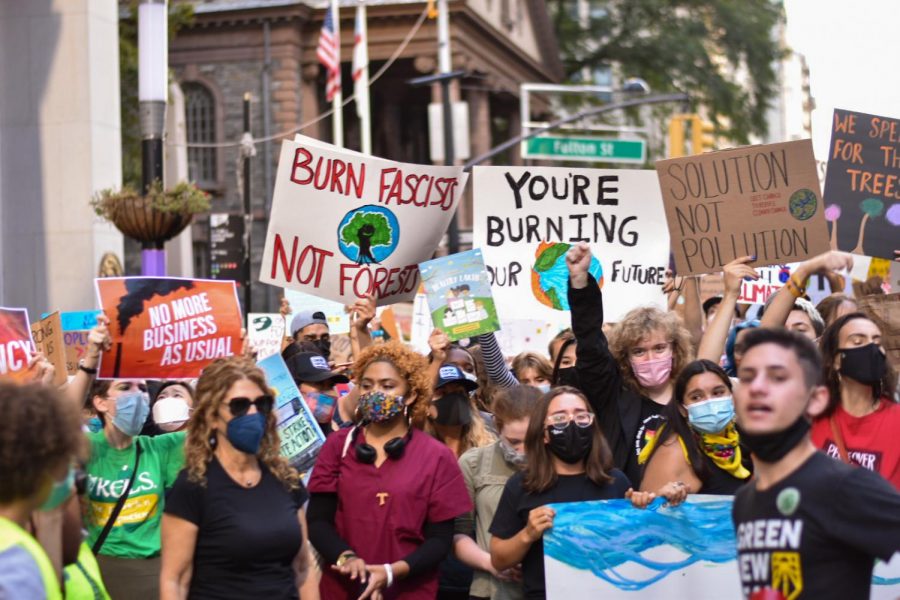 Large crowds of activists take to the streets of Downtown Manhattan.

More than 2,000 students and climate activists participated in the Global Climate Strike march last week, which was organized by the New York City chapter of Fridays For Future, a youth-led climate-advocacy group. Activists marched from City Hall Park to Battery Park on Sept. 24, raising awareness of, and demanding action on, the climate crisis. The march coincided with Climate Week NYC, a collaboration between the nonprofit Climate Group and the United Nations.

Fridays For Future’s demands include U.S. support for a treaty to end the manufacturing and production of fossil fuels, the passing of a Green New Deal for Public Schools, and justice for the populations most vulnerable to, and affected by, the climate crisis. Although most of the organization’s demands are focused on domestic issues, the organizers hope that media attention garnered by the strike will influence global leaders to advocate for change at the United Nations Climate Change Conference in Glasgow in November.

“We’re really hoping that this will gain a lot of media attention which would impact global leaders who are here in the U.S. and New York right now,” Emma Buretta, co-director of Fridays For Future New York City, said. “And we’re hoping that that will push them forward as they go to Glasgow for the next Climate Change Conference.”

“It’s up to science,” Wahbe said. “According to science, we’re clearly not doing enough — not in NYC, not in almost anywhere … There are very few countries that are hitting goals.”

Although strikes, protests and marches bring attention to the climate crisis, activists believe that real progress cannot be achieved until governments make fundamental changes to legislation and policy.

Tokata Iron Eyes — a member of the Standing Rock Sioux Tribe, an organizer with a group called the Earth Guardians and a prominent opponent of the Dakota Access Pipeline — emphasized the importance of community activism in instigating structural change.

“There is not a lot that we can depend on within any of these institutions to instigate any kind of change, but we can shape peoples’ minds,” Iron Eyes said. “I think that finding a way to do that together is the solution.”

At NYU, student groups have advocated for the university to play a greater role in the global fight against climate change. Earlier this year, Sunrise NYU launched Divest NYU, a campaign to urge the university to divest from fossil fuels. Tisch sophomore Alicia Colomer, the campaign lead for Divest NYU, said she believes it’s important to combat climate change at the community level and that NYU’s public messaging about the seriousness of the climate crisis does not align with the university’s investments.

“Even though NYU claims to be sustainable and pro-environment, in reality, they still invest their money into fossil fuels which will lead to the destruction of our planet,” Colomer said.

CAS first-year Stephanie Wittstruck, also a member of Sunrise NYU, wants students to know that participating in actions against climate change is easier than many might assume.

“Testifying in front of our actual state legislators is easier than you think,” Wittstruck said. “Anyone can sign up. That is when you can directly talk to your representatives, make your case and hopefully sway their votes.”

Paola Sanchez, a member of the New York City chapter of Sunrise Movement, said the march was a huge success and urged attendees to continue to work for climate justice.

“We have a lot more work to do than just march in the streets,” Sanchez said. “We really have to be able to talk to our politicians and get some political work done as well and be able to lobby and to be able to partner with the unions.”

A version of this story appeared in the Sept. 27, 2021, e-print edition. Contact Ari Solomon and Agne Tolockaite at [email protected]