In recent months, legislation seeking to ban the framework from being taught in K-12 public schools has been introduced in 26 states and enacted in twelve. 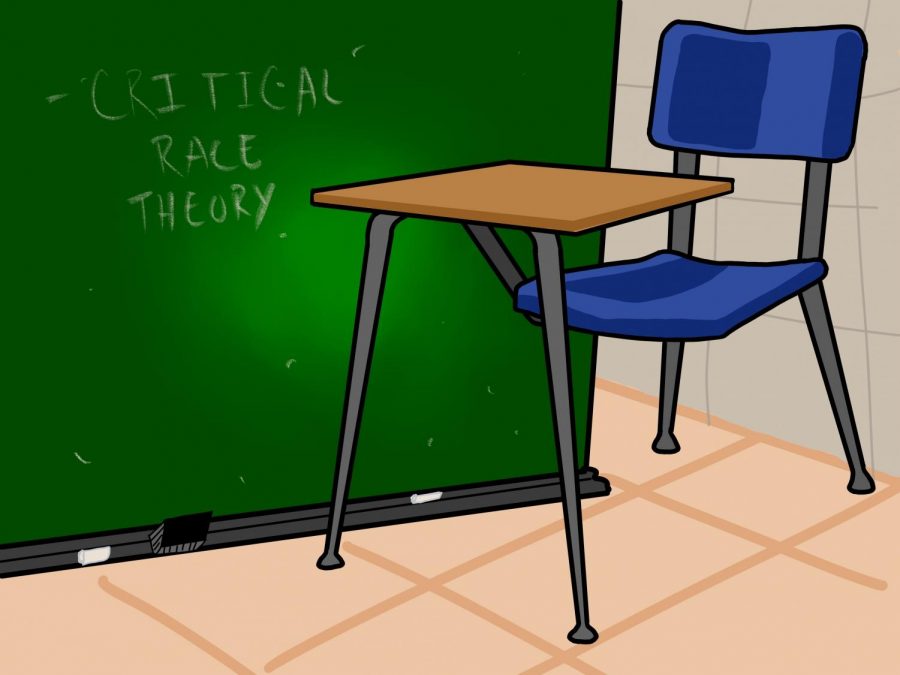 As the idea of critical race theory enters the political mainstream, state legislatures are clashing over what should be taught in K-12 classrooms. While some states have banned such curriculum, NYU students and faculty have encouraged similar discussions in university classrooms. (Staff Illustration by Manasa Gudavalli)

Amid a period of racial reckoning, critical race theory — a legal framework developed 40 years ago that analyzes how racism is not just the product of individual bias or prejudice, but instead embedded in legal systems and policies — has become a lightning rod for right-wing politicians and media personalities. But Sally Kohn — a progressive activist, columnist, television commentator and Columbia University adjunct professor — believes the opposition from conservatives is more about advancing an agenda than challenging the concept itself.

“It’s not that those attacking critical race theory don’t understand what it is — they don’t care what it is,” said Kohn, who was taught by former law professor Derrick Bell, a lawyer, civil rights activist and one of the creators of critical race theory at the NYU School of Law. “It’s a political football for them. It’s a thing that they can attack and manipulate and turn into what they need it to be.”

Critical race theory stands at the forefront of the debate about what students should — and should not — be taught in K-12 public schools. The term was coined at Harvard Law School by Kimberlé W. Crenshaw, a law professor at Columbia University and UCLA.

In recent months, legislation seeking to ban critical race theory in the classroom, backed by Republican officials and parents, has been introduced in 26 states — and 12 states have enacted the restrictions in some capacity. But the bans, Kohn said, are over something that does not exist in public schools: the Associated Press found little to no evidence of critical race theory itself being taught to public school students, and NBC News reported that teachers have not been required or pushed to teach it.

“What’s the point of the ban? Is this fearmongering?” Kohn said. “I do think kids in schools should be taught a more complicated and nuanced understanding of American history. If we do education right, we are empowering kids of color to cut against the grain of our society, historically and in the present. And we are informing and emboldening white kids to be better stewards of those ideals of equality and justice.”

According to David E. Kirkland — a Steinhardt associate professor and the executive director of NYU’s Metropolitan Center for Research on Equity and the Transformation of Schools — critical race theory is the new boogeyman in a larger conservative narrative.

“What they want to do is create local hysteria — they’ve done it before — creating this argument that we have structures and mechanisms in society that are biased against them,” Kirkland said. “We have the people who are the most privileged in society — the people who have enjoyed altering history — now manufacturing a problem when there isn’t one to gin up votes. It’s stirring up the darkest demons and anxieties within white people in order to get them to the polls.”

Kirkland noted that the states imposing bans in public schools are the same ones in which Republican lawmakers passed voter suppression legislation following the 2020 presidential election — which he sees as an attempt to retain power. Kohn also conjectured that swing states like Georgia turning blue in the election happened sooner than expected.

“Alongside the realities of the elections, we are having conversations as a nation that have reached into the mainstream because of movements over the last several years, especially Black Lives Matter,” Kohn said. “There’s now an energy and attention to racial justice in a way we haven’t seen in this country in several decades. We’re talking about inches of progress and miles of history of injustice — we can see the shift.”

Michael Rectenwald, an author and former NYU professor, voiced sentiments similar to those of conservative media hosts and anchors. Rectenwald previously drew controversy within the university community due to his tweets criticizing affirmative action, social justice and perceived “wokeism.” He says he supports the teaching of critical race theory, but thinks it is racially divisive.

“I have nothing against teaching critical race theory,” Rectenwald said. “But people of color can’t escape that racial categorization, and therefore, whatever they do, they’re effectively victims of racism — and this is very defeatist and fatalistic. On the other hand, it’s essentialist when it considers white people, deeming them to be such a way irredeemably, regardless of any behavioral traits or anything that they’ve done. It holds white people to be inherently racist.”

Another popular opposing argument, according to Kirkland, is that critical race theory indoctrinates children to hate white people and teaches them to be anti-American.

“There’s nothing in critical race theory that says we should hate white people,” Kirkland said. “It is not about indoctrinating people with a particular view of history — it is about interrupting the indoctrination of the narrative of what history could be with the possibility to question it through a perspective that sees, understands and seeks to resolve questions of race.”

“I don’t see NYU ever banning critical race theory, nor do I think they should, because quite frankly, I can’t think of a good reason why,” Khan said. “The whole point of academia and higher education is to have freedom of expression and freedom to inquire. It is very important to be able to explore and learn for oneself, and then come to one’s conclusions that are educated and informed. Critical theory courses would be empowering for all of us as we learn to understand our world better — and then learn how to fix it.”

Kirkland agreed with Khan, saying that it would be shortsighted for faculty and students not to have conversations about critical race theory, especially given the university’s academic mission of equity, diversity and inclusion.

“NYU should not only continue [to teach critical race theory], but we should be more enforceable and advocate for it,” he said. “Students and individuals should have the option of questioning whatever exists within our society that might lead us to a better truth.”

As the critical race theory controversy continues on cable television and across the country, Liberal Studies rising sophomore Kyle Foster said there is not much NYU can do to put a stop to the bans.

“They’d just be yelling into an echo chamber,” Foster said. “Such large parts of United States’ history is conveniently omitted from the average school textbook, and I think that’s so ridiculous. Not even knowing about huge events like the Tulsa Race Massacre goes to show how little the average public school goer is taught about racism in America, contributing to this ignorance that blinds people to how racism has for quite some time been embedded into society in so many ways.”