Eight people were arrested at the park on June 27 in a series of incidents widely circulated on social media. Students and park-goers say the heightened police presence makes them feel unsafe. 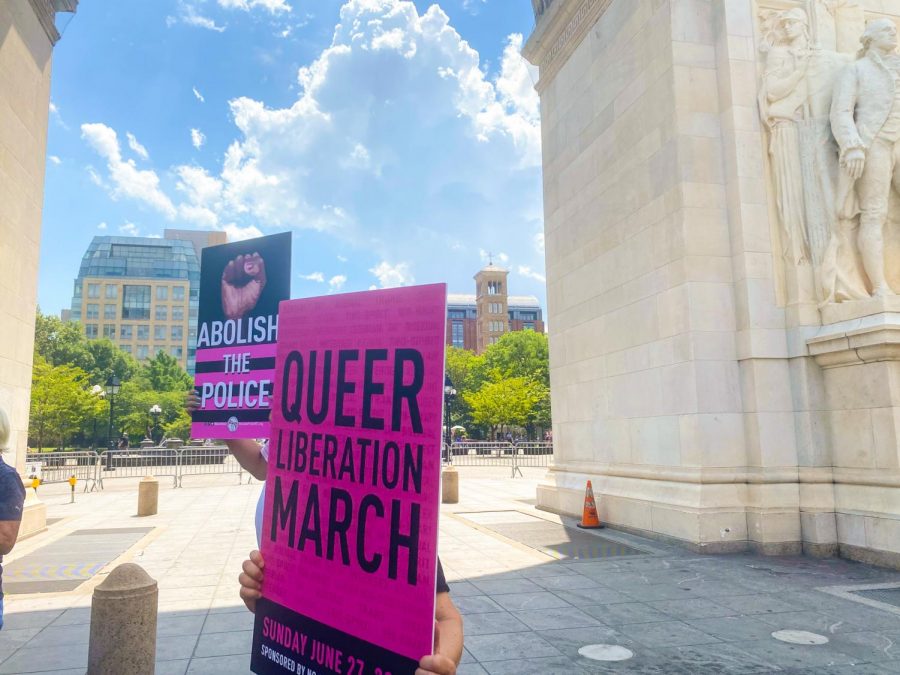 The Queer Liberation March — a main feature of New York City’s Pride Month events — ended in a state of fear on the night of June 27 after officers of the New York City Police Department clashed with marchers at Washington Square Park. Police issued summonses to four marchers for disorderly conduct, and four others face charges including resisting arrest, obstructing the administration of law and criminal possession of a weapon.

Images and videos of the standoff were widely shared on social media, with witnesses documenting the use of pepper spray, mace and riot gear by the NYPD.

There’s talk of mace happening right now at Washington Square Park. There is a sea of cops here. pic.twitter.com/sxPqvA0dKM

Shortly after the official march ended at Washington Square Park, the NYPD maced a group of people for allegedly circumventing a barricade, pepper-sprayed marchers and used batons to hit people. Later that night, the NYPD increased their presence. They began to push people out of the park and make arrests. At this point, according to Newsweek, some marchers threw water bottles at members of the NYPD.

At 10pm last nite, NYPD began playing a PSA (from the NYC Parks Dept) on the LRAD declaring that Washington Square Park was closed. An army of cops with helmets & batons began getting ready to clear the park. Parkgoers were not happy about it. Chants of “Hell no! We won’t go!” pic.twitter.com/Mlo96BF6OX

The Reclaim Pride Coalition, which organized the march, does not contract the NYPD to provide security at their events, instead employing private security to comply with local regulations. Despite this, the NYPD, particularly its Strategic Response Group — a group tasked with intervention during terrorist incidents and periods of civil unrest — were present at the march in large numbers.

At a press conference called to address the incident, Jay W. Walker, co-founder of the Reclaim Pride Coalition, condemned the SRG for indiscriminately using force against attendees and bystanders.

“What the Strategic Response Group does at protests is create provocative situations in hopes that they will create an aggressive response from protesters, so that they can then initiate a violent, aggressive response,” Walker said. “They do not keep anyone safe. They do not protect our communities. They only serve to antagonize and commit violence against peaceful and nonviolent protesters.”

Walker also recounted witnessing attacks at the north side of the park, near the Washington Square Arch.

“A group of NYPD officers attacked, grabbed and arrested people who were simply standing on the sidewalk,” Walker said. “I saw, up close and personal, officers throw a young woman down onto the hot pavement.”

Walker’s testimony is not unique. Others who participated in the march related their personal experiences with the police confrontation on social media, including NYU alum and current Hunter College graduate student Abby Melissen, who was at the southeast corner of the park when the police action began.

“I instantly just thought, ‘We’re being shot at,’” Melissen said. “A ton of people just took off running from that corner in a panic, as if we were going to be the victims of a mass shooting or something.”

Melissen left the park soon after and is still unsure what the loud noise she heard was.

“I honestly still don’t know what the noises were,” she said. “I can’t confirm an explanation for them for certain. I know a Twitter account posted that NYPD had an LRAD and posted a picture of it, but I don’t know if it was that.”

LRADs, also known as sound cannons, have been used at protests across the country to generate loud high-frequency sounds as a means of dispersing crowds. They have been found to cause vomiting, ear damage, pain, disorientation and injury. In April 2021, the NYPD agreed to limit its use of LRADs as a result of a legal settlement.

Marchers who left the park prior to the onset of the confrontation reported feeling uncomfortable with the high police presence during the event. Claire Thompson, a student at Ithaca College, noticed police officers protecting counter-protestors who used homophobic language rather than the marchers themselves.

“I joked to my friend that [the counter-protestors] were far more protected than One Direction,” Thompson said. “One Direction had one security guard for the five of them, and there was a solid police line protecting the bigots. It was remarkable to see that there’s such an effort to protect people that literally don’t want us alive.”

Many members of the NYU community feel the NYPD’s militarization of the park is a safety concern — particularly for students, faculty and staff of color. The university publicizes Washington Square Park as the heart of its Manhattan campus.

“I would understand one or two people to direct the flow of traffic,” CAS senior Akiro Elliott said. “But the amount of cops near the park was excessive. It introduced an aspect of fear that is quite literally the antithesis of what Pride should be. It felt a little disgusting to see, but I was mostly grateful that I didn’t have to interact with them. I don’t think I should have had to feel that.”

These escalations between police and Pride marchers are reminiscent of the history of Pride, beginning with the 1969 Stonewall riots, when the NYPD raided the Stonewall Inn, a safe haven for the LGBTQ+ community. This history, along with the rise in awareness of racially motivated police violence, is cause for extreme frustration with police presence at the march.

Echoing these frustrations, Steinhart junior Michelle Beaumont said it was unreasonable that police were at Pride. She recalled a conversation with a stranger that made her realize not all marchers are aware of the history of Pride.

“I had made a comment like, ‘Look at all these cops here — this is ridiculous. I thought there were no cops at Pride,’” Beaumont said. “She was like, ‘Yeah, well you know what, safety is really important, so I don’t understand why we’re saying the cops shouldn’t be at Pride when really all we want is safety.’ So I guess people don’t really understand the historical roots and why cops weren’t welcome from the beginning [of Pride].”

CAS alum Mandie Montes believes that students must constantly think about what they would do if they were involved in an encounter with the NYPD. (Montes is a former member of WSN’s editorial staff.)

“They’re monitoring Washington Square Park,” Montes said. “That situation just happens every weekend where they just basically fight with people. I don’t even know why they just kind of enforce these rules for no particular reason and they’re just harming people and especially marginalized people.“

Montes finds it unfair that students have to worry about protection in a location where they expect to feel safe. The events that occurred at Pride reminded them to brush up on their legal options and create plans of action for if they are ever in an escalated encounter with the police.

“The fact that you even have to think about that — like, who in our community can we trust to protect us and help us get out of dangerous situations — really fucking sucks,” Montes said.

After 16 months of isolation due to the COVID-19 pandemic, this year’s Pride March held particular significance to the city’s LGBTQ+ community as a symbol of liberation and a day of celebration.

“It was such a beautiful theme of people just dancing and being loud and not carrying all the anxiety of the last year, of the virus or anything. It really felt like people were back together,” Melissen said. “Suddenly it became hostile and we saw more and more police waiting to pounce. They were stalking the celebration and just seeing where they could get a foot in.”