NYU’s Brademas Center invited Álvaro Uribe Vélez, a former president of Colombia, to speak at an NYU event about sustainability and climate politics. During the event, which met significant backlash online, more than 100 people attended a protest outside Bobst Library. 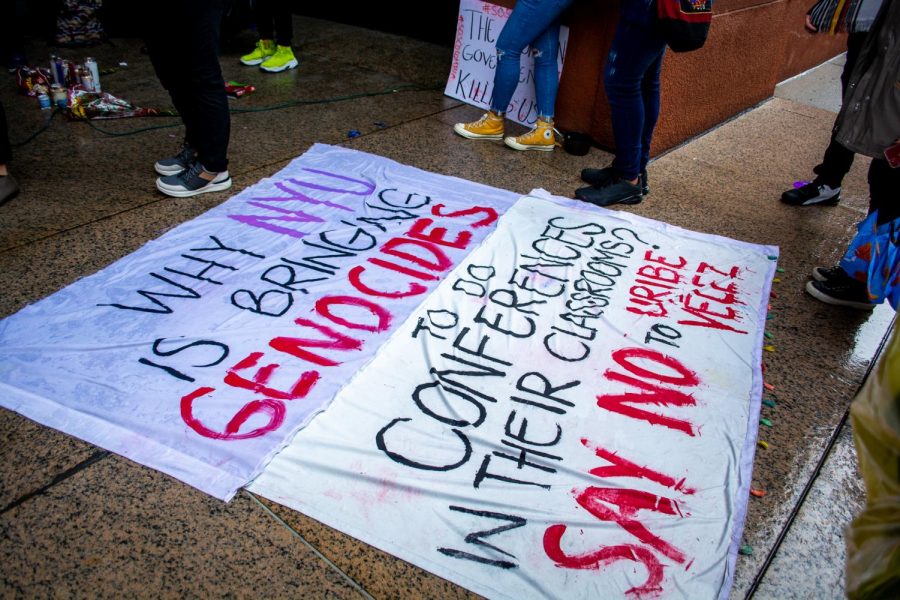 Former Colombian President Álvaro Uribe Vélez, is invited to the NYU John Brademas Center for the Study of Congress. This has led to a protest as Uribe is linked to right-wing paramilitary groups, and was recently accused of inciting violence against Colombian protesters. (Staff Photo by Manasa Gudavalli)

By Suhail Gharaibeh and Ruqaiyah Zarook

“NYU, NYU, genocide is on you!” Outside of Bobst Library, the chants of more than 100 protesters rang out against the virtual visit of former Colombian president Álvaro Uribe Vélez to NYU’s John Brademas Center for the Study of Congress.

Uribe, the president of Colombia from 2002 to 2010, is linked to right-wing paramilitary groups, and was recently accused of inciting violence against Colombian protesters. Uribe has also been accused of murdering union organizers and peasant farmers with death squads during his terms as president, according to Business Insider.

“Álvaro Uribe speaking here is a disrespect to education,” Colombian-American public school teacher and community organizer with the Party for Socialism and Liberation Cathy Rojas said. “He is a serial killer. He has assassinated more than 4,000 people across Colombia in what is known as ‘los falsos positivos.’”

Falsos positivos, or “false positives,” are a euphemism used by the Uribe administration to describe its extrajudicial executions of thousands of Colombian civilians as part of a U.S.-backed crackdown on left-wing insurgents.

Protesters outside of Bobst livestreamed the event, titled “Sustainable Colombia: Politics, Planet and Democratic Security: A Conversation with President Alvaro Uribe Vélez,” at the Brademas Center, playing the audio over portable speakers for the crowd to hear. The rally was attended by educators, students and numerous members of New York City’s Colombian diaspora. Many wore the colors of the Colombian flag and held signs calling Uribe a murderer and drug trafficker.

In the days before the rally, the Graduate Student Organizing Committee and the Colombian Studies Group circulated a petition opposing NYU’s decision to host Uribe. At press time, the petition was signed by over 7,000 people, including NYU students, professors and members of New York’s Colombian community. The petition was sent to the NYU administration, but the university has not yet issued a public statement about the event or the controversy it caused.

In an email to WSN received prior to the event, NYU spokesperson James Devitt described the event as “part of a two-year-old series featuring leaders from Latin American nations.” Other leaders who have previously participated in this series include Carlos Alvarado, the president of Costa Rica, and Luis Almagro, the secretary general of the Organization of American States. Devitt did not directly address the human rights abuses Uribe committed as president.

“Consistent with all of our DC Dialogues events, we anticipate a robust exchange on President Uribe’s tenure and the larger issue of sustainability, both among the panelists and during our question-and-answer session,” Devitt wrote.

The decision to invite Uribe was also met with criticism within NYU. The NYU Center for Latin American and Caribbean Studies expressed “dismay” at his presidential record “filled with a number of documented human rights abuses involving his support for police and paramilitary repression of civil rights as well as the weakening of environmental protections in favor of unsustainable development in the region.”

WSN also reached out to the Brademas Center for a statement, but received no response.

Milena Gutiérrez, a Colombian-born NYU alumna, said she was appalled to learn that NYU did not cancel the event. Gutiérrez — a member of the Colombia Studies Group, an association of graduate students from NYU, the City University of New York and The New School — believes the event was an insult to human rights advocates, independent journalists and anti-fracking activists.

“It’s difficult to see that someone whose name has been involved in multiple violations of human rights — that includes massacres, that includes crimes against humanity — it’s very difficult to assimilate the fact that he’s going to attend a conversation at my alma mater,” Gutiérrez said at the Bobst protest. ”It is a slap in the face to invite someone to talk about sustainability when human rights have been violated against native communities, against Afro-Colombians.”

Melody Feo Sverko, a graduate student at Wagner from Bogotá, Colombia, felt disappointed and concerned upon learning that the Brademas Center had invited Uribe to speak at NYU. Sverko said Uribe’s so-called successes were made possible by the blood of thousands of innocent Colombians, and that event organizers only included information that made Uribe look like someone to be celebrated.

“Does that mean that NYU supports the policies that led to violent crimes against humanity?” Sverko asked. “Does NYU intend to repeat policies of a militarized state that encourages corruption and extortion with impunity? As I find these two ideas farfetched, I can only assume that NYU Brademas Center and the two organizers, Claudia S. de Windt and Geovanny Vicente Romero, must be unaware of the implications of giving Uribe a platform to speak during this week of national protests.”

Claudia S. de Windt and Geovanny Vicente Romero, the other two panelists, did not respond to a request for comment sent prior to the event.

The webinar continued despite the protests, but was cut short due to numerous technical difficulties. Romero, the founder of Dominican Republic Center of Public Policy and a CNN columnist, said the audience members would have a chance to engage with the “broader issues” and record of Uribe’s tenure as Colombian president.

After a moment of silence for the 19 people killed by police during the Colombian anti-government protests earlier this week, as well as for those who died from COVID-19, Romero reiterated they were “touched” by the messages from audience members and invited them to take part.

A slew of technical difficulties continued to impair the webinar following Romero’s introductory remarks. Uribe said that while he was a presidential candidate, there was “high violence” in the country. According to Uribe, the aim under his tenure was to have “more security, more social cohesion, less poverty” alongside “democratic security” and “investment confidence.” Uribe said his administration “reduced poverty from 50% to 37%.”

Uribe acknowledged his controversial legacy and contentious presence at the NYU event.

“Of course, there is a lot of criticism against me,” Uribe said. “I am very controversial. They say I’ve committed human rights abuses. One rule in my administration was to put all the problems on the table, not to hide any problems, and not to hide any facts.”

“When you have to confront difficult issues or move forward with difficult tasks you need to love what you’re doing,” Uribe said when asked what he considered to be his major accomplishment during his career and what important lessons he’d learned.

Andrés, a Colombian-American protester outside of Bobst, said he came to protest Uribe’s visit because of the current crackdown by Colombian security forces against unarmed protesters. He preferred to keep his last name private. In less than a week, Colombian federal police have killed at least 24 civilians in the street, according to a Wednesday report by the country’s rights ombudsman, as CNN previously reported.

“Colombia is under siege,” one of the organizers told the crowd over a megaphone as the event began. “The ESMAD and the National Police are killing our people. They’re trapped. A lot of people are disappearing, they don’t know where they’re at. And NYU is guilty of that too, by bringing Álvaro Uribe.”

Grace, a student at Hunter College and member of the Internationalist Group, came with a sign reading, “CUNY adjuncts and students in solidarity with NYU GSOC and Columbia GWC unions!”

“It’s disgusting, but it’s not out of character for such a bloated, arrogant, capitalist institution,” Grace said when asked about NYU’s decision to host Uribe. “Their Board of Trustees has a lot to do with human rights violations.”

Further protests are planned for Thursday and Friday of this week.

“NYU is a huge institution,” Chris, a Colombian-American protester who held a sign that read “NYU supports criminals,” said. “It’s really hard to see this institution invite him to give words about good government and human rights.”