‘The resilience of GSOC’: A look into the union’s history

The ongoing graduate student worker strike is not the first time the Graduate Student Organizing Committee has used strike actions to battle for its demands. 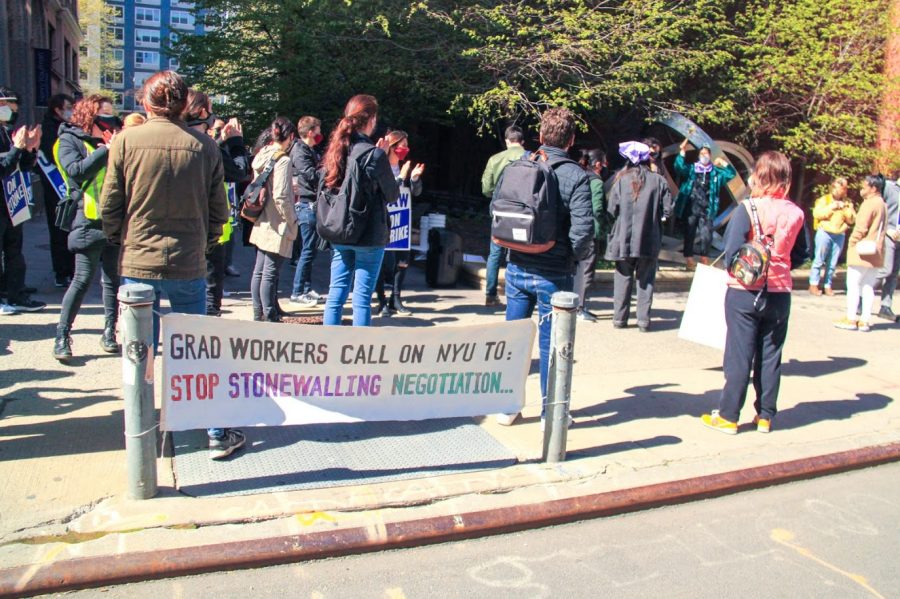 The Graduate Student Organizing Committee has been on strike since April 26 of this year, demanding a renegotiated contract after their previous one expired in August 2020. This strike is not the first time graduate student workers have struggled to get the university to bargain. (Staff Photo by Alexandra Chan)

Zach Schwartz-Weinstein marched alongside fellow graduate student workers and union supporters from Judson Memorial Church to Washington Square Park on April 27, 2006, to support the recognition of the Graduate Student Organizing Committee. They demanded that NYU negotiate a second contract with the graduate student union. The marchers sat down and blocked traffic on Washington Square North. Ten minutes later, New York City police officers arrested Schwartz-Weinstein and 56 others for “civil disobedience,” the New York Times reported at the time.

Although GSOC had been on strike for six months at that point, the union and university did not agree upon a second contract until 2015. Now, approximately 2,200 grad student workers have been on strike since April 26 demanding a renegotiated contract after the previous one expired in August 2020.

“Nothing that graduate students have ever won at NYU has come without a strike or strike vote,” Schwartz-Weinstein, a former Ph.D. student in American Studies and a historian of university labor, said. “It is unfortunate that NYU has forced another strike to happen. But members of GSOC should be commended and applauded for continuing to fight for the rights of graduate employees and against the casualization of academic labor on a national scale.”

According to Schwartz-Weinstein, NYU joined the movement in the mid-1990s. Its graduate students signed cards in 1998 choosing GSOC-UAW as their union. Students then filed for an NLRB election to determine if graduate student workers at private universities constituted a protected class of workers covered by the NLRA Act. An October 2000 NLRB decision recognized graduate student workers’ legal right to collective bargaining.

In 2004, former President George W. Bush stacked the NLRB with a conservative majority and the board reversed legal precedent, concluding that private universities were not required to bargain with graduate student workers. GSOC — still the only graduate employee union with a contract at a private university at the time — was unable to negotiate with NYU after their contract expired in 2005, eliminating its recognition as a union.

“NYU was under no legal compulsion to negotiate a second contract,” Schwartz-Weinstein said. “Ultimately, the administration had some negotiations with the union in which it basically said that we’ll continue to recognize you if you agree to accept this contract that no one in their right mind would agree to.”

According to Schwartz-Weinstein, the university’s proposed contract would have eliminated the union’s grievance process and required that GSOC become an open shop with voluntary membership and no dues. Schwartz-Weinstein said that graduate student workers tried to continue negotiating but that NYU stonewalled. Schwartz-Weinstein and other union members then went on strike from November 2005 to May 2006 and continued to organize during this period.

Seven years later, in 2013, NYU recognized GSOC again, following a voluntary and mutual agreement between the university and United Auto Workers union to withdraw from NLRB proceedings, as well as a 98.4% vote by graduate employees in favor of union representation. Only months before, the Faculty of Arts and Science had passed a vote of no confidence in former university president John Sexton.

Andrew Ross, the secretary of the NYU chapter of the American Association of University Professors and a professor of Social and Cultural Analysis specializing in labor and urban studies, said he and his fellow faculty members met with Sexton. They asked Sexton to recognize the union, but he did not.

“I remember telling President Sexton at that meeting that breaking a union is like breaking someone’s arm — it’s not going to rest easy until it gets full use of that arm back, which is what happened with GSOC,” Ross said. “Professors moved their classes off campus, the community was very supportive, and business owners offered their premises. It was a national-level strike, and leaders across the country came and spoke outside of Bobst Library. The long strike left a bitter and divisive legacy on campus.”

The union and the university did not settle on a second contract until 2015, the night before GSOC was set to go on strike. The resulting contract expired in August 2020. According to Ellis Garey, a GSOC organizer and fourth-year Ph.D. candidate in history and Middle Eastern studies, NYU had not reconsidered its original proposals after 10 months of bargaining with GSOC until the union voted to authorize a strike in early April of this year. Garey said the strike, which began April 26, will continue until a fair bargaining agreement is reached by GSOC and NYU.

“There has been a difference in how NYU is negotiating before and after the strike vote,” Garey said. “On April 22, we had our first negotiation session with the university after the strike deadline had been announced, and this was the first session after months that we saw true movement on NYU’s side. We finally had a counterproposal on out-of-pocket costs for health care, acknowledgement from the university that cops on campus pose a health and safety risk to workers and many other things.”

Laura Vogel — a CAS alumna of the class of 2007 who worked as a TA and participated in the 2005-2006 picket line — said the current strike is one more example of how NYU is a corporation at its core.

Ross called the administration’s current rhetoric regarding the strike “inflammatory” and said GSOC’s demands are not out of the ordinary, considering what is reasonable for employees to bargain for.

“It’s not a question of money, especially given the history of spending tens of millions of dollars over the course of a decade on high-priced union busting law firms to prevent the union from coming into existence,” Ross said. “The resilience of GSOC over the course of 15 years or so has been steadfast and admirably resilient, and continues to be so.”

According to Garey, a central feature of the GSOC’s current proposed contract is its approach to common struggles shared by the NYU community.

“What we’re hoping to accomplish through the strike is not only higher wages, better healthcare and a safer workplace for graduate workers,” she said. “We’re also hoping to assert an image of higher education that is not based on the exploitation of workers and students, but instead [is] a true place of learning and struggle. We’re both fighting for our own material interests, but also a different vision for academia.”

Correction: WSN originally misstated the date of the vote of no confidence. WSN has corrected it and regrets the error.