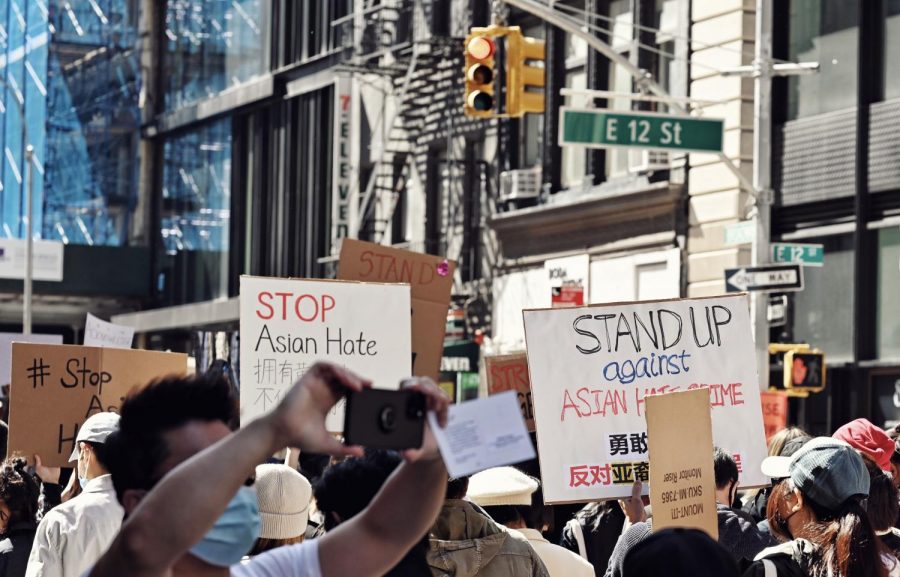 Images from a recent protest against Asian hate in the Lower East Side. At NYU, an Asian student group is offering self-defense training to Asian students through Northwestern’s Karate Club. (Photo by Sirui Wu)

When CAS junior Yijie “Frank” Huang saw plans in late March for rallies in response to a surge in violent anti-Asian hate crimes, he created a WeChat group to encourage his fellow Chinese international students to join him in protest.

An international student from Pujiang, China, Huang, and this group he created, distributed flyers listing GoFundMe pages for various victims of anti-Asian violence. They also created placards, including one that reads, “Hate is a virus.”

“I want to organize this group chat on WeChat because everyone in China used it to communicate, so I posted the QR code,” Huang said. “And we got 47 in the group chat, and maybe like 25 of them came on Sunday [March 21].”

Huang and his WeChat group are one of many NYU student groups that have resorted to self-organizing to combat anti-Asian hate crimes in the face of what many students consider a lack of concrete action from NYU beyond statements of solidarity.

Also in late March, NYU’s Asian American Political Activism Coalition invited students to a self-defense class hosted by Margaret Lo, a retired attorney and sensei in karate, and Chirag Goel, a senior at Northwestern University and a second-degree black belt member of Northwestern’s Karate Club. Lo has been teaching self-defense classes for years and said the Atlanta shooting horrified her whole community.

“It’s such a shock that I instantly thought of organizing something, anything, so that we can at least feel like we are healthy,” Lo said. “We can’t stand aside and watch our old people and our vulnerable people get injured like this, when there are some very simple things that we can do to at least reduce the incident rate … I have stood by over the years and watched this nonsense.”

Goel believes self-defense classes are a way to help students during the continued surge in anti-Asian hate crimes. According to him, many students can take similar actions.

“It starts off with communication and outreach, because I think that there’s a lot of organizations that are trying to put a lot of meaningful work together in order to combat such issues,” Goel said. “People want to be a part of the movement to stop things like Asian hate, violence against African Americans, against all racial groups, people of different genders, backgrounds.”

Although NYU has announced initiatives to make students of Asian descent feel safer on campus — such as a partnership between the Office of Global Inclusion and the Department of Public Safety to expand Bias Response Line services — some students believe more needs to be done. Eloise Wang, a Gallatin first-year and international student from Qingdao, China, argues that although NYU has made statements, they have not committed to any substantive action in support of Asian students.

Wang recalled indirect forms of anti-Asian hate during much of the time they have spent in the United States. In their senior year of high school, they said their school’s travel restrictions at the beginning of the pandemic were largely targeting Asian American students.

Lo arrived in America in 1969 and witnessed a rise in Asian immigration. Atop what she has witnessed during the COVID-19 pandemic, she said issues of racism and discrimination are far from over. She also said that what keeps her going in spite of the pandemic is hope — but also fear.

“When I looked at the demographics of our dojo and looked at every single member, every single one of us fit it into a target demographic that had been targeted,” Lo said. “The increase in Asian immigration has led in general to actually more aggression, because as you rise in population, you also rise in power.”

Lo, along with other female martial artists, plans to create short self-defense videos in many Asian languages and hopes universities like NYU and Northwestern can help dub and promote them. She said that while the internet is the best way to reach the broadest audience, self-defense videos available on YouTube primarily target people who are already physically competent.

“We are working on putting together a curriculum aimed at the peak demographics of the people who actually suffered attacks in recent times — that is, older women,” Lo said. “Older men are people who are not necessarily able to run … We’re more interested in having those videos dubbed over in every language under the sun. They’re not going to be complex, and maybe [in] 10 minutes we can show them one or two things.”

“Once you graduate, you’re going to come into positions of power,” she said. “And you will be diluted sometimes in a big meeting room: you will be the only Indian or Chinese or Korean person. And yet you will have a lot of burden on you because you’re highly educated … There’s a lot of expectation, and there’s a lot of undermining.”