One image used in the training originated in a Twitter thread that referenced slaves as hostages and slave catchers as police officers. 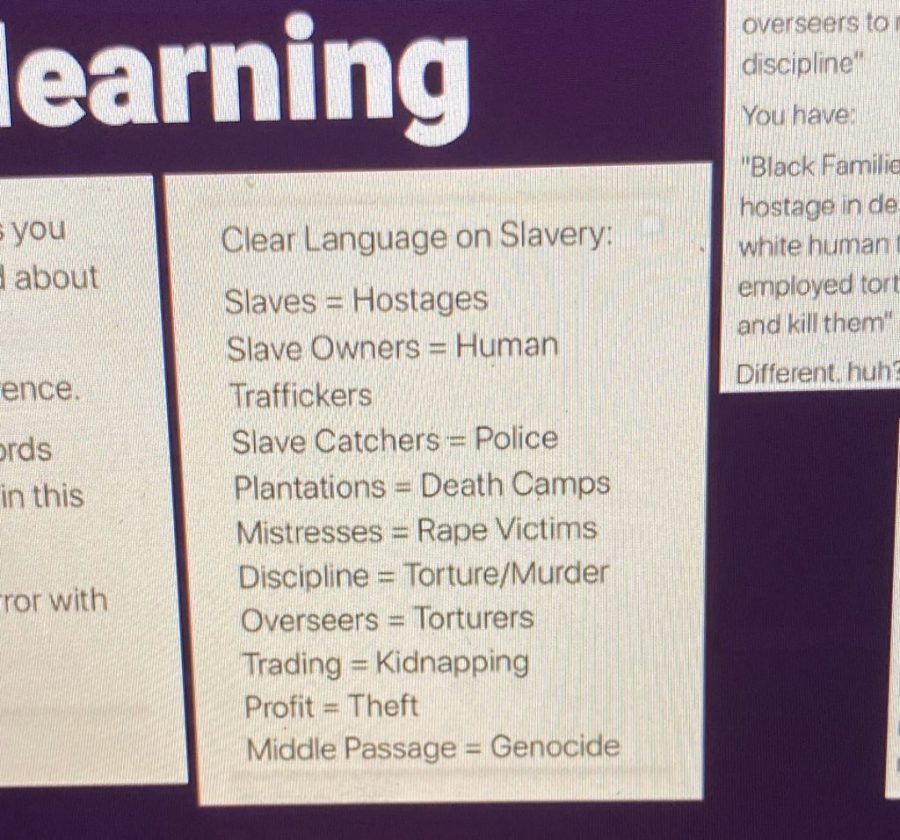 A screenshot shared over Twitter titled: "'clear language on slavery' resources provided by nyu residential life." The information was shared during a RA training meeting. (Photo by Sean Nesmith)

NYU Resident Assistants were called into a meeting on Sept. 23, the same day a Kentucky grand jury declined to indict officers Jonathan Mattingly, Myles Cosgrove and Brett Hankinson for the killing of Breonna Taylor.

CAS junior Sean Nesmith knew something was wrong when some of his friends, who are Resident Assistants, tweeted about leaving.

Nesmith listened to the training on FaceTime with one of his friends; they sent him screenshots of pictures referenced in the training. One picture equated slaves to hostages and slave catchers to police officers.

According to Nesmith, paraprofessionals asked RAs to define white supremacy. Some of the Black RAs left during the training because they felt uncomfortable. Nesmith, who was reluctant to share this information with WSN and NYU Local, wrote a Medium article titled “NYU Doesn’t Care About their Black RAs” in response to the training, since RAs are not allowed to speak to the press.

“I’m good friends with RAs, and it’s disheartening that they are not able to talk to the press.” Nesmith said. “I know several RAs who quit their position, and I thought it was imperative to write the narrative.”

WSN reached out to NYU Black Violets, an organization whose mission is to advocate on behalf of Black students at the University. While they did not want to speak on behalf of the RAs, they were disappointed with the session and are currently working with NYU’s Office of Residential Life and Housing Services to rectify the situation. WSN also reached out to RA Voices, but they did not respond at the time of publication.

After speaking with IRHC and Black Violets about Wednesday’s training, NYU RA Council released a statement via Instagram on Saturday afternoon.

“The Black Violets engagement floor is still an ongoing project and is slated to start within both FYRE and TRUE halls during the 2021-2022 academic year,” the statement read.

The statement also discusses having a student-led diversity advisory board starting next semester. There will be a meeting on Sept. 28 where RAs will learn about how they should communicate to residents about the New York Police Department, U.S. Immigrations and Customs Enforcement and racial bias.

Nesmith wants NYU Residential Life and Housing Services to create resources for RAs so they feel supported. He also feels that the university should value input from groups like NYU Black Violets, RA Voices and RA Council to make these changes.

“I would like to see accountability, and the first step of that is NYU administration acknowledging they made a mistake,” Nesmith said. “Some RAs are trying to tackle cross-dialogue but they do not have the proper resources to do so.”

Vanessa Handy and Julia Santiago contributed reporting for this article.