A Brooklyn protest and a Manhattan protest, thousands strong, joined together to demand justice for Breonna Taylor, who was fatally shot in her own apartment by Louisville police officers. 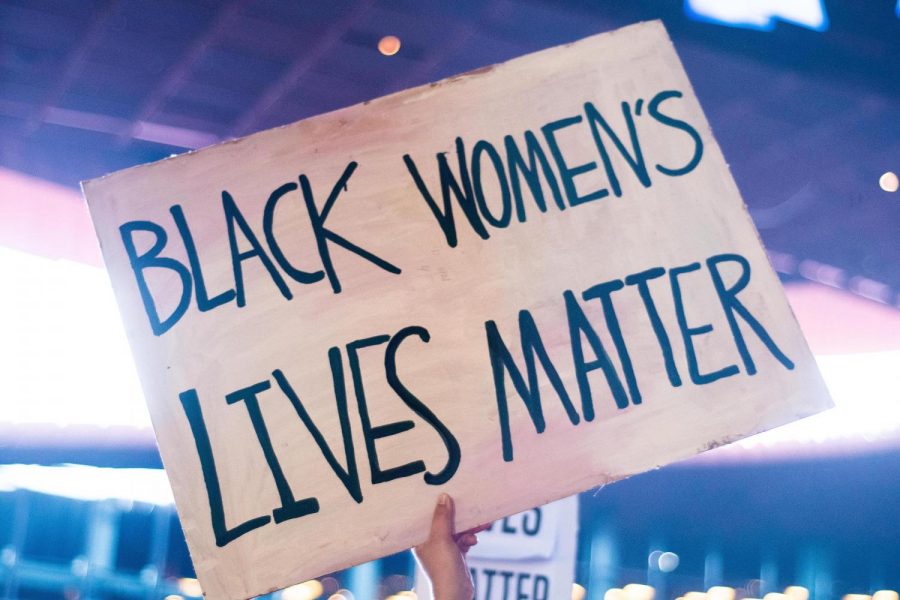 A protester holds up a sign reading "Black Women's Lives Matter" at the Barclays Center in Brooklyn. People protested all over New York City after a grand jury decided not to charge Louisville cops for the murder of Breonna Taylor. (Staff Photo by Jake Capriotti)

Thousands of protesters took to New York City’s streets the night of Wednesday, Sept. 23 after none of the Louisville Metro Police Department officers who shot Breonna Taylor were indicted on charges relating to her killing.

Taylor, a 26-year-old Black woman, was fatally shot multiple times in her own apartment by LMPD officers who entered her home using a no-knock warrant during a narcotics investigation on March 13. Kentucky’s attorney general claimed on Wednesday that the officers did not use a no-knock warrant.

A Kentucky grand jury brought no direct charges relating to Taylor’s killing against LMPD officers Myles Cosgrove, Jonathan Mattingly and Brett Hankison in a decision made Wednesday. One of the three officers, former police detective Brett Hankison, was indicted on three counts of wanton endangerment of Taylor’s neighbors. The other two officers who fired their weapons were not charged for anything.

Two protests started around 7 p.m. One group gathered at the Barclays Center in Brooklyn; the other, at 59th Street and 5th Avenue in Manhattan. The Brooklyn group first took a knee in honor of Taylor before crossing the Manhattan Bridge and marching into SoHo. The Manhattan “Black Womxns March” protest was organized by Strategy For Black Lives in coordination with other groups. Organized this past summer, the youth-led Strategy For Black Lives aims to be both an activist group and an active player in developing pro-Black policies in New York.

“We need to additionally be civically engaged and advocate for policies across all levels of government,” Frantzy Luzincourt, one of the founders of Strategy for Black Lives, wrote in an essay for McSweeney’s. “Our catchphrase, ‘it’s a strategy,’ embodies that sentiment. We are looking at the long game and want to develop longstanding solutions that provide equity for black lives. This is just the beginning.”

Elijah Fox, the 21-year-old Press Director of Strategy for Black Lives, said that the turnout for Wednesday’s protest was promising.

“As school started, as work started up again, we definitely started to see a reduction in the number of protests, and their size as well,” Fox said. “This is the kind of thing we were seeing all summer — it’s good to see it coming back when necessary.”

“Strategy for Black Lives has been at the front and center of the Black Lives Matter movement throughout the entire summer,” Fox continued. “ We have to make sure we’re elevating the voices of Black women. We need to stand up for Black lives.”

The Brooklyn and Manhattan groups combined at Second Avenue and East Fourteenth Street at around 9:50 p.m. The crowd then headed back downtown, chanting “Justice for Breonna!” and “No justice, no peace!”

Throughout the protests, activists took specific actions to ensure the safety of the groups. Hundreds of protesters rode on bikes, coordinating with organizers to block traffic as protesters on foot marched throughout the streets. Other protesters passed the blockade of bikers in order to navigate traffic on the street. Every few blocks, organizers would stop in the middle of a street to perform a mic check. These short breaks allowed protesters to take a few minutes to break from marching, while organizers switched up chants or took a few minutes to dance.

Protestor Djoulie Lowes said they’ve been protesting since May following the murder of George Floyd.

“I wasn’t surprised [at the Taylor decision],” Lowes said. “I’m tired — I want to go home, kiss my family, cuddle my sister — but I can’t. Because one day, my sister is going to become Breonna Taylor. She was murdered in her home, and she was left on the floor for 20 minutes. There was no justice at all.”

Protestor Mike Holt said he is marching for “accountability and justice.”

“I’m here because the grand jury verdict came in and they only want to press charges on one of the officers for a stray bullet that went into a neighbor’s house,” Holt said. “That’s a slap in the face.”

Outside of New York City, protests took place in Atlanta, Philadelphia, Washington, D.C. and other cities across the country. In Louisville, two officers were shot; they received non-life-threatening wounds.

“I think it’s a different energy [than past BLM protests],” a 33-year-old protestor — who chose to remain anonymous, citing employment repercussions — said. “I think now with the election coming, there’s a sense that if we let this go on — if this is the direction we’re going in — it’s going to be worse. There’s a sense of numbness about this. Like how many times can I protest in a pandemic?”

The protestor reflected on how violence against Black lives has been a societal constant to them for the majority of their life, citing the names of several Black men who were killed at the hands of the New York Police Department.

“I grew up in New York,” the protester said. “I remember being a kid and Shawn Bell, Amadou Diallo, Abner Louima. And I’m like, ‘Wow — now I’m turning 34 next week and the kids are saying, my friends’ children are seeing the same stuff that I saw.’ Except now they get to see it on video, whereas I just read about it in the Daily News.”

Correction, Sept. 24: A previous version of this article incorrectly stated where in her apartment Breonna Taylor was shot. The article has been updated and WSN regrets the error.