In an email sent to Steinhardt students and faculty, Dean Jack Knott announced that the school is creating the Office of Equity, Belonging, and Community Action to help establish an anti-racist academic culture. 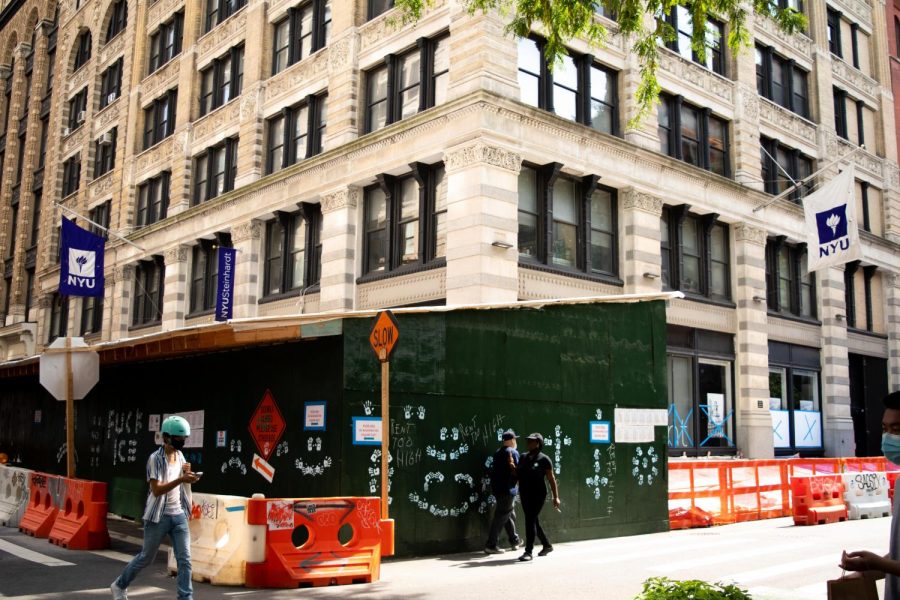 Steinhardt School of Culture, Education and Human Development is located at 82 Washington Square East. In a school-wide email, the school's Dean Jack H. Knott announced the creation of the Office of Equity, Belonging, and Community Action at Steinhardt, which will be led by Vice Dean E. Kirkland. (Staff Photo by Jake Capriotti)

In a school-wide email sent out on Sept. 4, Steinhardt Dean Jack H. Knott announced the creation of the Office of Equity, Belonging and Community Action at Steinhardt. In a later email dated Sept. 8, Dean Knott named David E. Kirkland as the Vice Dean leading the project.

“In his new position, David will provide leadership for, and oversight of, strategies to support a culture committed to promoting equity and social justice at NYU Steinhardt and beyond,” he wrote in his email. “He will develop and sustain infrastructure to unify and amplify equity and social justice in all aspects of our School’s work, including curricula, recruitment and hiring practices, promotion and tenure, and retention initiatives. He will build partnerships with community organizations and individuals to learn and implement model practices from community leaders and other stakeholders as well as leverage NYU Steinhardt’s research to influence practice and policy.”

This initiative comes after Steinhardt’s previous projects to create a more diverse and inclusive academic environment. The school had previously established the Diversity Council in 2016 which has, under Charlton McIlwain’s directorship, launched the Faculty First-Look program — a year long program that offers current doctoral or terminal students pursuing the final degree available in their respective academic fields, from historically underrepresented groups, with professional development opportunities. Steinhardt also issued a statement announcing its anti-racism initiative in collaboration with the NYU Metropolitan Center for Research on Equity and the Transformation of Schools on July 27, which Kirkland currently directs.

“As we have pursued this work, a difficult truth has emerged: white people have internalized messages, attitudes, and beliefs about white supremacy, regardless of their intentions or awareness, and often act to perpetuate racial hierarchies in our schools and communities,” the statement reads. “We believe it is the collective responsibility of white people to articulate, address and act to change these white supremacist mindsets.”

Steinhardt sophomore Prithvi Venkataswamy, who is studying music business, is optimistic about the strides that the new office may make and hopes that the initiative will be a catalyst for constructive change.

“I hope the creation of the Office of Equity, Belonging, and Community Action would lean more heavily towards community action or just action in general,” he wrote in an email to WSN. “The Dean also outlined anti-racism, cultural proficiency, equity for all, and social justice as the main goals. I would hope these goals lean towards action rather than just education or spreading awareness. If this is the case, I could see this new organization being a vehicle for change – especially with the resources of Steinhardt and the leadership of the Vice Dean.”

“I think it’s definitely a step in the right direction,” he wrote in a text to WSN. “But I can’t help but feel a little skeptical about the effectiveness of it because there have been so many empty efforts by large businesses, corporations, and brands during this racial uprising that have publicized initiatives only as a form of appeasement, not with the hopes of making lasting change.”

Steinhardt’s Undergraduate Student Government President, Ryan Campbell, expressed that the USG trusts in the new office to propel an anti-racist attitude throughout the school and stated that the USG will work in conjunction with the office to meet the Office’s stated goals. Campbell also commended Dean Knott for his initiatives since his appointment a month ago.

“We eagerly await the arrival of the new Vice Dean, and intend to collaborate with them closely in the year ahead in their work to do so,” he wrote in an email to WSN. “A steadfast commitment to racial justice, promoting faculty diversity, eliminating financial barriers to courses and course materials, and actively responding to student input are crucial to creating more inclusive learning environments — we hope that the new Vice Dean and their office will fulfill these expectations.”

The announcement comes a week after students pointed out discriminatory language against low-income students used in the syllabi of Steinhardt’s ASL classes. Baffled students from across the university sent emails to the department administrators demanding a change to the syllabus and more friendly policies for low-income students.

“In order for it to positively serve NYU, the community needs to know that the Office sincerely wants to hear from them,” Bueno said. “So the way that it reaches out to students, faculty, and teachers about what they want out of this initiative will be key. Getting their trust is crucial to making this a generative experience.”