Student Government Assembly Chairperson Raj Kittusamy resigned just over two weeks into his term after releasing a statement which appeared to call for increased university ties to the NYPD. 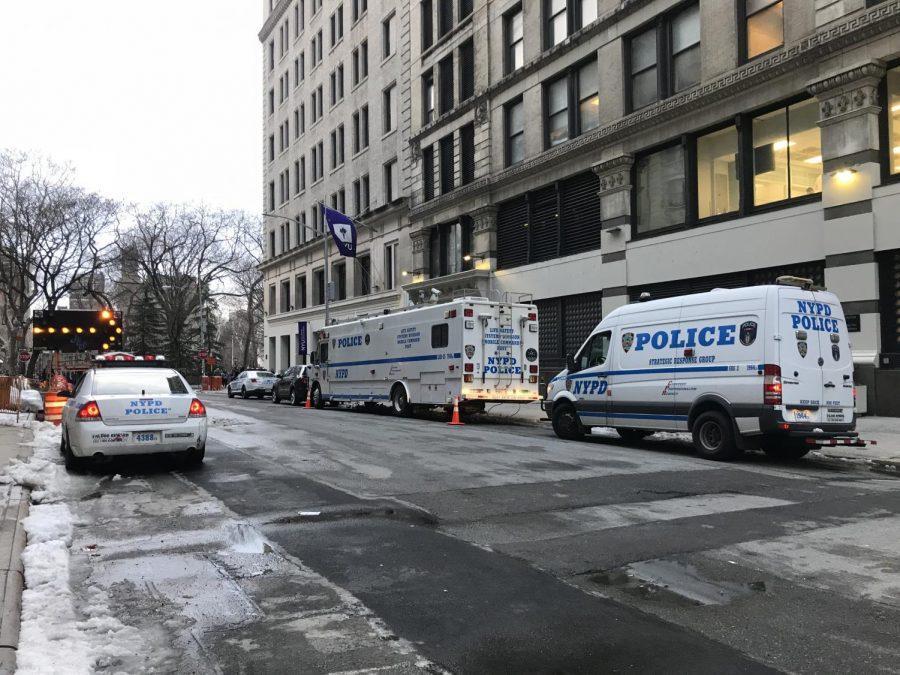 Student Government Assembly Chairperson Raj Kittusamy has resigned following criticism of a statement that appeared to call for the university to increase ties with the New York Police Department following the increase in police brutality seen nationwide.

“New York University has and will increase its Public Safety Liaison Program that exists between members of NYU Public Safety and the NYPD,” the statement originally read. “It is the recommendation of the Student Government Assembly Executive Committee that an increased student presence in the liaison program be secured immediately, as this program is what allows NYPD to be familiarized with our campus and community guidelines.”

After it was criticized by students on Twitter for appearing to support an increase of police presence on campus, the statement, released via Google Docs, was edited to say, “This [Public Safety Liaison Program] is something the SGA does not condone at all, and will continue to actively oppose. However, should such a program continue, the Executive committee will demand university leadership to include a significant student presence in the liaison program to ensure that the concerns for safety and well-being of our Black community are vocalized in every step possible.”

The updated statement was criticized for its conflicting language compared to the original statement, which reads as if SGA opposes the Liaison Program rather than supports its expansion, as originally stated. Former SGA Chairperson Jakiyah Bradley voiced her concerns about this as well as Kittusamy’s leadership in a series of Tweets on Friday, May 29 criticizing his silence on Floyd’s murder and alleging opportunism, saviorism and support of the NYPD.

“[B]e careful of ‘leaders’ who keep feeding you the same rhetoric about change they can bring to you and your community,” Bradley tweeted. “[I]t’s a sad world where you have to beg your leaders to represent you.”

On Tuesday, June 2, Black Student Union President Dylan Brown tweeted an email template calling on Kittusamy to resign from his position. In other tweets, Brown accused Kittusamy of lying about the existence of the Public Safety Liaison Program, writing later that Bradley confirmed the Liaison Program does not exist. Shortly after, an SGA tweet also clarified the nature of the liaison program, echoing what Brown and Bradley had stated.

“We have since had the administration reach out to us and explain that we wrongly characterized NYU’s relationship with NYPD as a liaison program, as these ties look more like emergency, crime, and public safety response calls when the issue is outside of the scope of NYU,” the tweet reads.

In an interview with WSN two days prior to his resignation, Kittusamy said he was told about a Liaison Program by Senior Vice President for Global Inclusion and Strategic Innovation Dr. Lisa Coleman in a meeting with university leadership the day before. Student Senators Council Vice Chair Hayden Howard and Presidents Council Vice Chair Ryan Campbell, who were also at the meeting, confirmed to WSN that they believed there was a Liaison Program based off of what was said by Coleman in the meeting.

“All I really want to say is that in discussion there was directly referred to a liasonship between NYU and the NYPD,” Campbell told WSN. “The only thing I’ll say that we needed to revise is the idea that we characterize it as a program, which as of [Wednesday, June 3], we learned that the university prefers not to refer to it as a program and more or less a set of procedures and services between NYU and NYPD.”

In an email to WSN, Coleman denied that she indicated the existence of a liaison program between NYU and the NYPD during the meeting with SGA.

“I never indicated a liaison program with the NYPD,” Coleman wrote in an email to WSN. “[…] I also indicated that there seemed to be some confusion about the role of the NYPD and Public Safety and that members of SGA set up meetings to get further clarifications as needed.”

University Spokesperson John Beckman also indicated that he was not aware of the program’s existence, despite not being present at the meeting.

“I am not certain what you mean by the ‘Public Safety Liaison’ program; we do not have any such program, and, consequently, are unaware of any proposed ‘expansion,’” Beckman told WSN in an email.

Beckman did not respond to multiple requests for comment about what the “procedures and services” mentioned by Campbell entail. Vice President of Global Campus Safety Fountain Walker has not responded to requests to clarify the relationship between Public Safety and the NYPD at the time of publication.

So what does this mean for NYU students calling for the university to cut ties with the NYPD? Especially when the relationship between the two isn’t completely known at this time?

As police violence has escalated across the country in response to protests after George Floyd was murdered by a Minneapolis police officer, students from Ohio State University to the University of Illinois have called on their universities to re-examine their relationships with local police departments. Two days after Floyd’s death, the University of Minnesota announced that it was severing ties with the Minneapolis Police Department.

The Graduate Student Organizing Committee, NYU’s graduate student union, released a joint statement with the Incarceration to Education Coalition and X-Campus on Monday, June 1 calling for NYU to cut ties with and prevent the NYPD and ICE from operating on the university’s campus. GSOC also tweeted that it will make this a demand in the upcoming contract negotiations.

At the time of publication, over 9,600 people have signed a Change.org petition started by NYU alumna Rebecca Kligerman, similarly calling on NYU to cut ties with the NYPD.

While both the GSOC statement and Change.org petition highlight the University of Minnesota’s decision, there are key differences that determine how they could cut ties with their local police departments.

The University of Minnesota cut ties by ending its practice of contracting police for large events and specialized services like K9 explosive detection units, but retained that they will still cooperate with the MPD for “joint patrols and investigations” that impact the safety of its community, as reported by City Pages.

NYU doesn’t directly contract the NYPD for sports games, since many of its athletic teams play at facilities not owned by the university, unlike many other schools across the country. However, NYU does contract NYPD officers for security on move-in day. Beckman did not respond to multiple requests for comment about how much NYU pays the NYPD for these contracts at the time of publication.

NYU Public Safety also relies on the NYPD to deal with on-campus crime as they lack the ability to make arrests, like the University of Minnesota and many other universities across the country do. According to a 2011-2012 report form the Bureau of Justice Statistics, 68% of four-year universities of over 2,500 students have campus police departments that are deputized by local and state law enforcement and hold arrest powers. The report also found that 63% of universities have armed campus police. Neither of these characteristics are true for NYU’s Public Safety.

“NYU’s Public Safety Officers are not “sworn officers” or “peace officers,” meaning that they do not have the power of arrest,” Beckman said. “So if someone has committed a crime against someone in our community — let’s say a robbery — we contact the NYPD to respond to and investigate the crime. Our officers are not armed; if there is a situation that involves an armed person — say, an active shooter — we would turn to the NYPD.”

As a result of this complicated relationship, the university utilizes the NYPD in at least two ways: the power to investigate crimes committed on the New York campuses as well as through direct and indirect contracting at venues where the NYPD provides security. However, this doesn’t clarify how the university could go about severing ties with the department — other than cancelling its direct contracts and boycotting indirect contracts. Short of the university adopting a fully abolitionist or decarceral stance, it seems as though the only way to fully cut ties with the NYPD, aside from contract terminations and boycotts, would be to deputize NYU Public Safety, resulting in training by either city or state officials, allowing them function like a police force. This is likely to be undesirable for those already calling for the university to cut ties with its police, rather than create its own.

In his interview with WSN, Kittusamy insisted that SGA went into the meeting with more serious demands for the university.

“It was very clear, not just from our friends reaching out to us, members of the Black community reaching out to us and to Student Government platforms […]” Kittusamy said. “What NYU students want is that NYU cut all ties now and moving forward […] with the NYPD. And this was well understood by all of us going into it.”

Nevertheless, Kittusamy and other SGA members at the meeting claim that they were informed about the Police Liaison program by university officials — despite its existence being refuted by multiple sources  — and that SGA had no say in its implementation. Kittusamy believes that much of the criticism was the result of his failure to properly communicate what they knew and how they learned of it.

“I believe that [critics] feel that I betrayed their well-being, their trust, and their interest […] not just out of the student body but of the Black students at our New York campus,” Kittusamy said. “Because we made it sound like we were trying to expand or increase the ties between NYU and NYPD through the liaison program, and all it would have taken was either different wording or an extra sentence. Either before we even got into the updates or in that update itself to say this is something that NYU told us about and therefore we wanted to alert the student body of, not something that we had invented or created.”

Despite this, students were still outraged over the lack of clarity on behalf of SGA. In addition to the emails received through Brown’s template, Gallatin student Rose Baez created a petition also calling for Kittusamy’s resignation, which has since received over 230 signatures.

When speaking with WSN, Kittusamy stated he had no immediate intention of resigning but was listening to criticism and would release a statement in response. The statement goes on to clarify Kittusamy’s position and what the demands of SGA were going into the meeting as well as directly addressing the criticism he faced and the calls for his resignation.

“I believe it is of utmost importance that I, Raj Kittusamy, chairperson of SGA, take responsibility for each of the harms listed as reasons to resign in calls for my resignation that we’ve been receiving over the course of the day,” the statement read. “[…] Per the requests’ demands, I promise to issue a decision by tomorrow, June 4th at 5pm EDT.”

Following through, Kittusamy announced his resignation on Twitter that day. Student Senators Council Vice Chair Hayden Howard will serve as interim SGA chairperson until elections are held this upcoming Thursday, June 11. Nominations for the new SGA Chairperson will start tomorrow when interim Election Commissioner Noah Mullenix releases the list of eligible candidates. How SGA plans to adjust its approach will become clear once new leadership has been chosen. In addition, what will remain or become of the relationship between NYU Public Safety and the NYPD is yet to be determined.

Screenshots of the tweets mentioned in the article are in WSN’s possession as Bradley’s and Brown’s Twitter accounts have gone private at the time of publication.