Lambda Phi Epsilon has been suspended after screenshots of several members' messages in a private group chat were shared on Twitter. 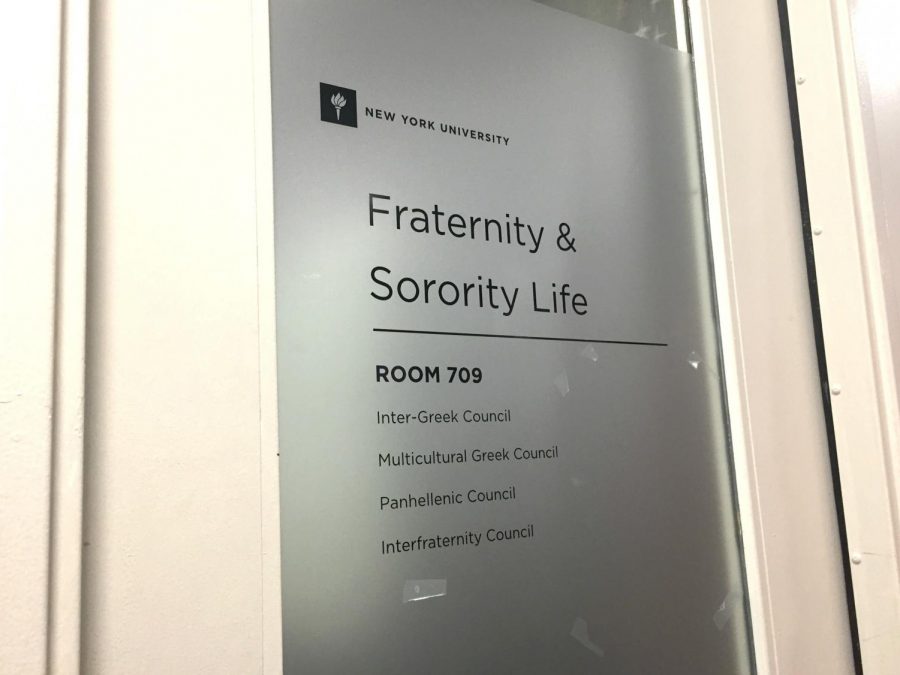 The office of Fraternity and Sorority Life located at the Center for Student Life at NYU. (Staff Photo via Darcey Pittman).

The NYU chapter of the Lambda Phi Epsilon fraternity has been suspended indefinitely by both the University and the national fraternity after racist GroupMe messages concerning the public outrage in Minnesota were leaked on Twitter.

The suspension comes as nationwide protests continue for the fourth day after a police officer killed George Floyd in Minnesota by kneeling on his neck for over seven minutes. Recordings of the incident show that Floyd was crying out that he couldn’t breathe. The chapter members appeared to be speaking about the protests following Floyd’s death in the leaked messages.

“As fucked up as it is, I think the threat of police brutality actually keeps those communities more safe than without it,” one member of the chat, Stern student Roger Sun, wrote. He later asked nobody to screenshot the messages, writing that his life would be ruined. Fellow Stern student Jun Cha chimed in that “Black people also don’t recognize that they kill each other the most for some reason.”

“I disagree a little, being an indentured servant and being a slave is different,” Justin Tung wrote in the chat. “But the principle is the same, we grinded significantly harder while black peoples were lazy.”

The screenshots of these messages were originally posted by @dawnofsaints on Twitter and have since gone viral, netting over 8,000 likes and over 4,000 retweets. Additional screen grabs were added to the thread by @marquis_liz, although the images posted online only reveal brief conversations. WSN has not received a full transcript of all the messages in the chat at this time, other than what was posted publicly.

Prior to NYU’s decision to suspend the fraternity, the national Lambda Phi Epsilon organization, a self-described Asian-interest fraternity, put out a statement condemning the chapter’s action.

“The mission of Lambda Phi Epsilon is to guide men on a lifelong discovery of authenticity and personal growth and the International Fraternity is committed to helping its members live positive, healthy, and responsible lives,” the press statement reads. “Racism has no place in that pursuit.”

University Spokesperson John Beckman also said in a statement to WSN that the messages are not in line with NYU’s community values.

“The sentiments expressed in these posts are abhorrent, at odds with our community’s values, and counter to the inclusive community we seek to create for everyone at NYU,” the statement read.

Beckman stated that the situation is currently being investigated by the Office of Student Conduct and suggested students utilize resources like the Bias Response Line.

For some students, reporting to the Bias Response Line isn’t enough when it comes to racist experiences on campus.

“Many black students have experiences where you submit things to the bias response line, like in terms of my professors and students making inappropriate comments and it just never gets minded, it’s just like it gets thrown in the garbage,” a rising junior and Black student in CAS Mathew Asare told WSN.

Asare voiced concerns over the contradiction between NYU’s marketing and the on-campus experience for Black students.

“We’re at a university that likes to tout a 33% increase this year and a 50% increase that year in the black population at this school but they’re not doing anything to care of Black mental health.”

SGA president Raj Kittusamy told WSN that the student government will be reaching out to groups including the Black Student Union and Multicultural Greek Council in order to form an official response. Kittusamy said that students can voice their requests for NYU to better support black students communities by emailing [email protected].

In the meantime, SGA released a statement addressing both the protests and the leaked messages. The statement emphasized that in this difficult time for the Black community, the association will help to share and support Black voices. A list of actions students can take is also provided at the end of SGA’s statement.

“It is our belief that such protests, including recent violence, are the result of years of failure on behalf of the state to protect the bodies of Black people in the face of racist policing and widespread discrimination,” the statement read. “As the elected body that represents the interests of NYU students, we will hold ourselves accountable to do just that.”

The statement went on to condemn the content of fraternity members messages.

“The revelations this morning regarding members of NYU’s Lambda Phi Epsilon chapter are deeply distressing and disturbing,” the statement continued. “The words and beliefs exhibited in these members’ leaked messages are entirely antithetical to the values of this institution and are yet another reminder of the pervasive prejudice and racism both within college campuses and amongst our larger community.”

Roger Sun posted an apology at around 11:30 a.m. to the Facebook group “subtle asian greeks” — a private Facebook group of over 17,000 members. While acknowledging that he won’t be immediately forgiven, Sun admitted his ignorance on the issues he commented on in private. Sun did not respond to requests for comment from WSN.

“Although it was not my intention to support and condone police brutality, my intentions do not matter,” Sun’s post read. “The fact of the matter is that my texts, whether intentional or not, demonstrated a misconstrued viewpoint that is deep rooted in my privilege and ignorance for the black community.”

Alison De Leon, a Black junior in CAS, doesn’t believe these apologies are enough. She suggested the possibility of diversity training or suspension from housing as possible reprimands for their actions.

“I think for me personally, it’s the fact that these are people that you may encounter in your classroom, people you may work in group project with, these people might be your floor mates, might be people you bumped into at the dining halls, and you never really know [their true beliefs],” De Leon said.

David Gonzalez, an assistant director of the Center for Student Life who oversees Fraternity and Sorority life on campus, did not respond to WSN’s multiple requests for comment.