Tisch Partial Refund Effort sent out a mass email laying out its next steps to get students’ demands met after Tisch Dean Allyson Green responded to concerns about partial refunds on students’ tuitions with a video of herself dancing. 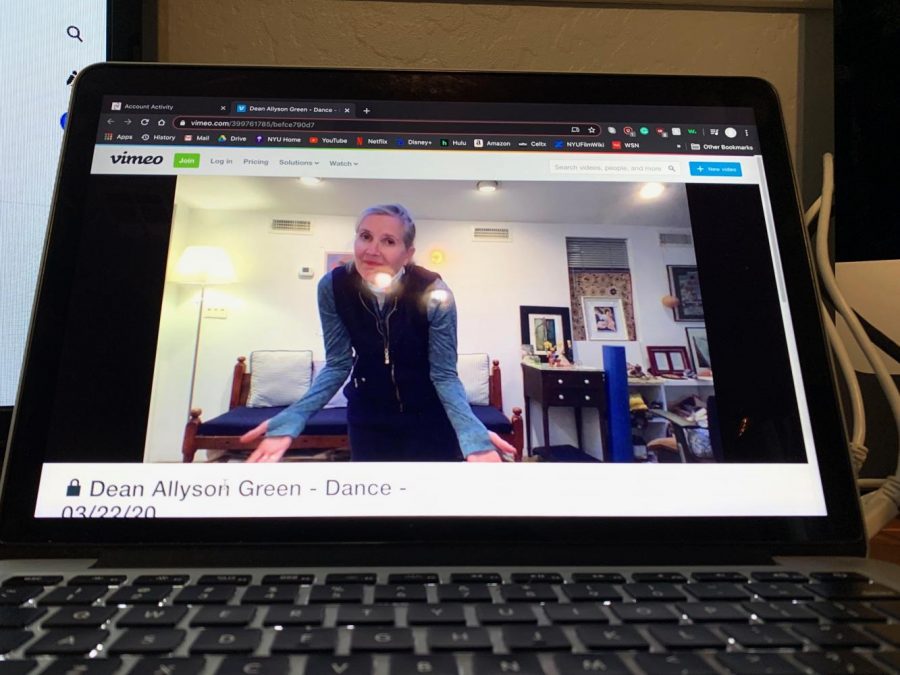 Tisch students have petitioned tuition refunds, but received a video of Dean Green lip syncing and dancing along with a blanket statement of refusal. Many Tisch students have experienced difficulties continuing their classes remotely, and the extra fees meant for equipment, studios and more are no longer applicable to their study. (Staff Photo by Jake Capriotti)

As NYU has made the full shift to remote instruction, students at Tisch School of the Arts are demanding partial refunds for their classes, many of which are not easily transferable to online platforms.

“I am sorry that in trying to be clear and transparent about tuition refunds (as this is a university decision), I did not acknowledge the heavy financial burden you are under,” the email read.

Attached was a video of the dean providing updates in an effort to connect with students, according to the email. At the end of the message she attempts to lift students spirits by dancing to R.E.M.’s “Losing My Religion,” which many students perceived as poorly timed, including Tisch first-year film and television major Alex Dekelbaum.

“Dean Green is a kind person that genuinely cares about Tisch,” Dekelbaum said. “Although her response had good intentions, it was tone-deaf and disappointing. Students are being displaced and families are losing their source of income.”

Dekelbaum said that not being able to take in-person classes has a negative effect on Tisch students.

“Tisch students are simply not getting the hands-on education that they paid for online, and people are hurt,” he said. “In this time of crisis, NYU should do the right thing and use our endowment, currently standing at $4.3 billion. The university should take the hit on this one, not the students.”

The push for partial tuition refunds comes after the senate approved a $14 billion relief fund as part of the $2 trillion COVID-19 stimulus package for colleges to bear the costs of the crisis. On average, students paid a total of $29,276 for the Spring 2020 semester and the tuition poses a financial burden on many Tisch students.

To organize the call for a partial refund, students have banded together to create the NYU Tisch Partial Refund Effort, a petition appealing to the Board of Trustees to offer a partial refund for Tisch students. At the time of publication the petition had 3,705 signatures.

“By placing profits above the concerns, needs, and quality of education being received by students, NYU ignores the fact that us art students will be paying full price for an education that lacks the facilities, equipment, technology, services, and hands-on experience we are explicitly paying for,” the petition reads.

Tisch first-year Katrina Kwok, a film and television major, states that while online classes have not been completely unsatisfactory, the quality of education that students are paying for has been compromised.

“I don’t feel like the online classes reflect what in-person classes would have been, especially my production classes,” she said. “It’s a lot harder to film projects from home when you don’t have the equipment you need and class is just different now.”

The petition asks for the Tisch Dean and departmental chairs to support Tisch students in their efforts to persuade the NYU Board of Trustees. Student requests include asking for a full refund for credits paid for internships and jobs that have been suspended, in addition to production fees for cancelled in-person events. Students would also like for administration to offer partial tuition refunds for classes whose equipment and studio spaces they do not have access to anymore.

The team behind the NYU Tisch Partial Refund effort also demands providing salary protection for all faculty and staff members, resources, including mental health and wellbeing services for displaced students, domestic students and international students who are facing increased uncertainty due to holds on visa, job authorization and housing statuses and travel restrictions.

Tisch first-year Meg Yamada — a film and television major — believes the dean’s video was insensitive given the circumstances.

“In regards to the dean’s video, although she has good intentions, it wasn’t helpful to that cause in any way,” Yamada said. “However, I do believe that the blame shouldn’t be put entirely on her, as it’s not in her control. Sure, the video was a bit unnecessary, but at the end of the day the issue is larger than just her emails.”

Tisch senior Kaylee Scinto, who has actively been involved with the Refund Effort, stated that while students have received no formal apology or update from Dean Green or other Tisch leadership representatives, the team is currently formalizing a final set of demands which they intend to send to the dean on March 30.

“We still have not received further correspondence from the dean so we are hoping that by sending this letter just along with all the media coverage and attention this has been receiving it will prompt further response from them,” Scinto said.

The students’ pleas have caught the attention of several Tisch Alumni including actress Rachel Bloom and Saturday Night Live writer Anna Drezen, who have publicly supported the students’ demands after Tisch senior Michael Price shared the dean’s video on his twitter. Blogger Perez Hilton even signed the petition himself.

Tisch alumnus and Emmy-nominated news producer Dan Przygoda tweeted his support and expressed his dissatisfaction with the measures undertaken by the NYU administration. He stated that the students are facing a burden for something that is not their fault.

“Telling [students] how much money is already being spent constructing new facilities, buying new equipment, etc. Let’s be clear: NONE OF THIS IS THE STUDENTS’ FAULT,” he wrote. “In order to get the full value out of their tuition or scholarships students need access to the equipment that was promised to them. Not everyone has the resources or access to similar equipment outside of the school.”

While Dean Green has not formally issued an apology to the students, she has commented on the situation to The New York Post and NBC news stating that her sending of the video bore no bad intentions and she regrets hurting students’ sentiments.

“What I meant to demonstrate is my certainty that even with the unprecedented hardships of social distancing and remotely-held classes, it is still possible for the Tisch community to make art together, and that all the artists in our school will find ways to remain closely connected even as circumstances challenge us,” Green told NBC news.

So far, only the Board of Regents for the University System of Maryland have voted to allow their universities to offer students partial refunds on room, board, and fees for student services such as parking and athletics. Other universities — including NYU — have issued statements offering refunds on housing and dining fees but have yet to grant any tuition refunds.

On Sunday morning, around 250 students received an email with the subject line “The email I wish NYU would send us.” The email included a mock message with a university letterhead expressing the sympathy that students hope to see from the administration. The email ended by reminding students of its fabricated nature.

“This is the email I wish we could receive from NYU,” the message reads. “And it really hurts that it’s not. But it’s not too late to try to make it a reality.”

At the bottom links are included to the Tisch Partial Refund petition, the group’s ever-growing Facebook page and a petition urging transparency from the NYU administration started by Steinhardt students.

While the email received some positive feedback, others missed the warning that it was from a student and felt tricked when they discovered it wasn’t real. The sender of the email, who wished to remain anonymous after receiving several angry emails commented on their intentions behind sending it.

“I just wanted to give people somewhere to channel the anger and the energy to a cause we all have in common,” they said. “I just wanted them to see that they could do something about it because if all the students spoke their minds and everyone signed it, it would be harder for NYU to not respond or at least compromise.”

The author of the email hoped the email would be a way to redirect students’ energies from focusing on individuals to thinking about how to persuade the administration.

“I feel like this is one way to sort of getting what we want without necessarily pushing down certain faculty members at NYU because I do know a lot of the people at NYU are very mad and targeting specific individuals like the dean and they’re commenting on her dancing video and stuff and I just wanted to target the NYU administration as a whole and not single one person out because it’s not any person’s fault,” they said.

Tisch senior Emma Hoersdig founded the Tisch Partial Refund Effort in collaboration with her peers in the drama department to assimilate everyone’s concerns on one joint platform. The Facebook group, created on March 22, now has nearly 1000 members.

“Our professors are trying really hard and we are all learning about how to do this at the same time but there is just so much that is in-person that is important to our education that we are losing completely like our dance studios [and] opportunities for singing,” she said. “The safety of acting in a studio feels really different to try to experiment with it at home, especially if you can not be completely alone. Basically, we are losing a lot.”

Correction, March 30: This article previously misstated the University System of Maryland’s refund policy. The previous version also misstated a source’s major. This article has been updated and WSN regrets the error.

A version of this article appeared in the Monday, March 30, 2020, print edition. Email Aarushi Sharma at [email protected]