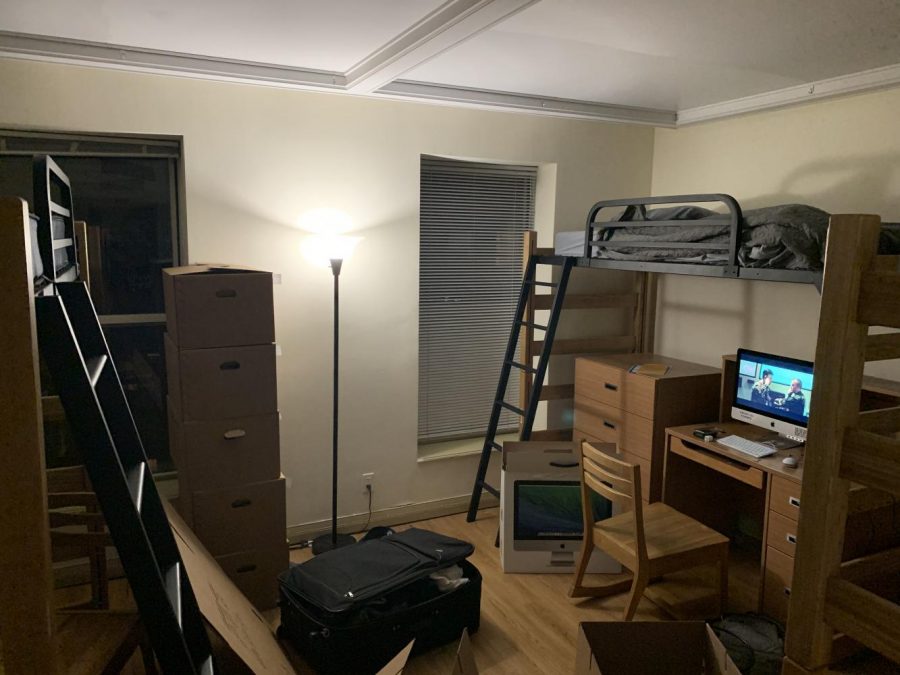 A student packs up their belongings in Clark Hall, a residence hall in Brooklyn Heights. NYU dorm halls are reportedly to be used to remedy hospital bed shortages. (Staff Photo by Jake Capriotti)

Editor’s Note, March 18: the number of hospital beds in New York City has been updated for specificity. They were counted using data from the New York State Department of Health with original reporting from the author.

After ordering students to leave campus, NYU may use the soon-to-be empty dorms to house coronavirus patients, according to a university-wide email sent on Tuesday, March 17.

Wais asked students to empty their rooms in the event they would need to be converted into a site for hospital beds and noted that it was better to act now than in an emergency situation.

“NYU has an institutional responsibility to help if things come to that here in the city,” Wais wrote. “It will go a lot less well if student possessions remain in the rooms. Let me put it this way: for those of you still here (or within a day-trip) and in a position to pack up your room, your willingness to do so is potentially an important contribution to health measures that may come later.”

Omar Bourne, the Press Secretary for the NYC Emergency Management, said the city is making plans to accommodate all potential patients, but has not yet requested for CUNY or NYU to make their residence halls available.

“NYC Emergency Management is coordinating an interagency citywide effort to identify additional medical surge spaces in the City to alleviate the stress on NYC Hospitals,” Bourne told WSN in an email. “We are considering types of spaces that include existing operational healthcare facilities, and those that can be renovated and congregate settings. We have not currently submitted a request to CUNY or NYU.”

“At this point, our best hope is to utilize the Army Corps of Engineers to leverage its expertise, equipment and people power to retrofit and equip existing facilities — like military bases or college dormitories — to serve as temporary medical centers,” Cuomo wrote. “Then we can designate existing hospital beds for the acutely ill.”

Cuomo cited one analysis, which estimated that 214 million people in the United States could be infected with the coronavirus and as many as 21 million of those people could require hospitalization. New York City has 23,922 hospital beds; 1,416 for intensive care.

As concerns loom that New York City hospitals will not be able to handle an influx of coronavirus patients, Mayor Bill de Blasio said that New York City will add 8,200 beds to the healthcare system by converting unused and privately owned buildings, at a City Hall Press conference on Monday, March 16, Newsday reported.

Wais’ email introduced the option for students forced to leave residence halls the option to leave their possessions locked in their dorm room, but explained that this decision comes with added risks.

“We want you to understand the downside: if you choose this option, you must be prepared that, in the event of a State-mandated or other emergency condition that requires your room to be made available as part of a health response, your possessions will be swept up with everyone else’s in the room,” Wais wrote to students planning to leave their belongings locked in their dorm. “If it is at all possible at that time to arrange for storage, NYU will strive to do so.”

Wais’ email also updated Hamilton’s instructions, requesting that only students who live close enough to return to New York City within one day pack their belongings — rather than all students.

Wais emphasized that the motivation for closing the residence halls was for the safety of students and the short notice was due to the quickly evolving situation.

“City life itself has changed: streets are empty, newsstands and other businesses that rely on commuters and foot-traffic are closed, ridership on mass transit is way down,” Wais wrote in the email. “And the reality is, New York is only at the beginning of its struggle with this virus. We can look to Europe to get a sense of what yet may come.”

Wais cited the potential shelter-in-place order as a motivating factor in the decision to close residence halls, after De Blasio told New Yorkers that the order may be issued within the next 48 hours.

Wais highlighted that international students with extraordinary circumstances may be allowed to remain on campus and linked to an exemption form. He also linked to an application for emergency aid for students facing financial complications.