The bestselling author and NYU Journalism professor sat down with former WSN Editor-in-Chief Sakshi Venkatraman and spoke to a crowd of NYU community members. 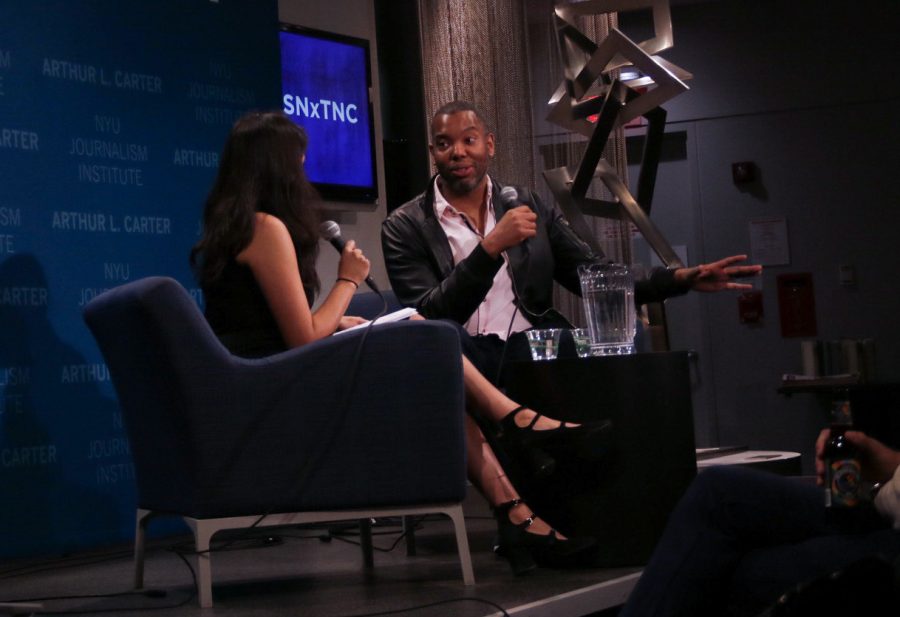 The event was co-sponsored by WSN and the NYU Journalism Institute to raise funds to support the newspaper and its staff.

The conversation touched on issues ranging from the current U.S. political climate to advice for aspiring journalists — especially ones of color.

The event was attended by around 50 NYU students, faculty and visitors who had heard about it independently.

Coates attributed his interest in political issues affecting the black community to his upbringing in West Baltimore, where he says violence was a part of everyday life for black citizens. His interest in writing was spurred after reading several of the books from his father’s publishing company, Black Classic Press.

“I was ferociously motivated,” Coates said. “They say you live in this poor neighborhood, there is all this murder and there are all these guns because something is wrong with you and you are like, ‘That can’t be true.’”

Addressing concerns about job insecurity and insufficient pay that aspiring journalists have before entering the field, Coates emphasized the importance of finding compensation for the work that they do.

“The reality of it is you have to find somebody else to pay for it, and I understand that the system does not look like that at the moment,” Coates said.

He added that he considered himself lucky to be able to fulfill his aspirations while other talented writers struggle financially with trying to obtain an education in journalism.

Coates referred to Vice President Mike Pence and Iowa Rep. Steve King (R-Iowa) misquoting speeches made by black historical figures. He stated that while it is possible for anyone to get misquoted, the black community often faces the worst of it.

“That’s terrible, you know — one of the things that happens, though, is that we don’t control anything,” Coates said. “We have our minds, we have our art, we have our philosophy.”

Commenting on majority-Black voters preferring centrist Democratic candidates to progressive Democrats, he said the community is looking for a figure to best represent their interests, thinking beyond what the mainstream opinion appears to be.

Coates has publicly criticized Bernie Sanders as the potential Democratic party’s candidate, stating his belief that Sanders would not effectively address Black people’s issues if elected.

“When you have nothing at stake, when it’s not your kid being locked up in a cage, when you are not from one of the ‘sh-thole’ countries, when your country is not one of the ones under the Muslim ban,” Coates said, “it is really easy to say that ‘I’m going to back a revolutionary candidate to overthrow everything.’”

He shared his belief that politicians are currently being elected based on political correctness while failing to address the issues that are impacting different racial and ethnic communities across the country.

In regard to his teaching process, Coates emphasized that he advises students to report what they observe rather than what they believe most people would agree with, citing his own writing experience as an example.

“Any sort of writing had to be true,” he said. “It had to come from a place I had actually seen myself, where I existed.”

Gallatin senior Lisa Cooley said she has been a fan of Coates’ writing since she read some of his material for her classes.

“When we first came to NYU, we had to read ‘Between The World and Me,’ and I’ve always wanted to see him speak ever since, and this was a great opportunity,” Cooley said. “It was important to hear the perspective that people who don’t have anything to lose [in matters of legislation] will say these things and are not necessarily aware of those [people] who have things at stake.”

Omar de Jesus, who heard about the event through NYU’s Prison Education Program, said Coates’ ideologies deeply resonated with him, adding that he was impressed by Coates’ attempts to talk about slavery reparations more candidly.

“He really wanted to move forward with reparations and not just have a conversation behind closed doors,” de Jesus said. “It was powerful.”