The Legacy of James Foley, Panel Grapples with War Reporting 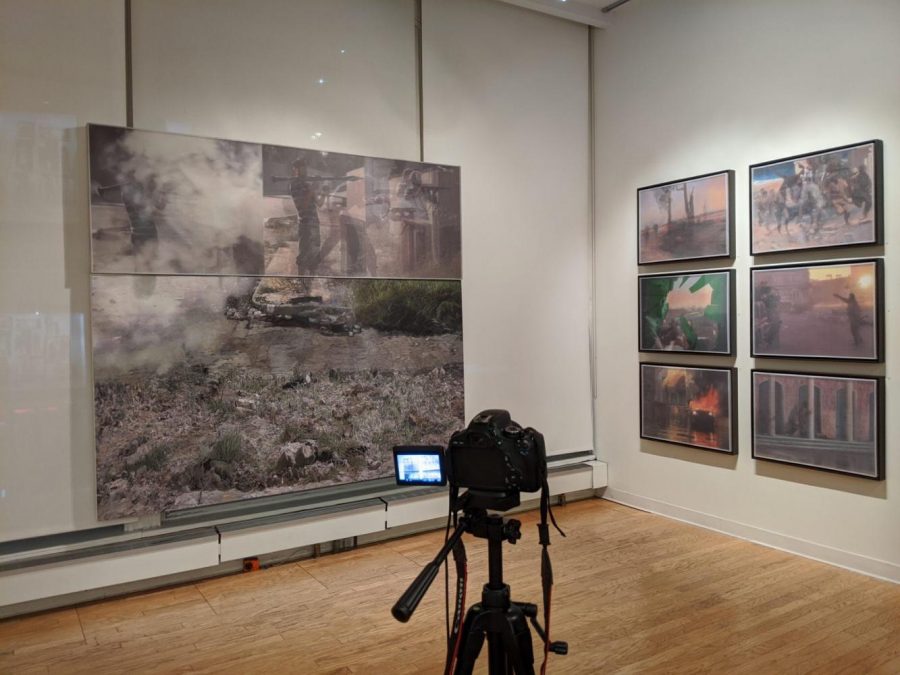 The Puck Building at NYU Wagner displays the works of the late journalist James Foley. Foley was murdered by ISIS in 2014. (Staff photo by Nick Mead)

In 2014, American journalist James Foley was executed on tape by the Islamic State. The footage is one of the most broadly-circulated videos of an act of terror. On Tuesday, NYU Wagner hosted a panel focusing on Foley’s legacy while discussing the dangers of war zone journalism.

The panel, hosted at the Puck building, centered on war photography, media ethics and countering propaganda. After the panel, attendees viewed ‘Inescapable Truths’, an art exhibition made from one of Foley’s last rolls of camera film during his time reporting on Libya and Syria.

“This work isn’t about his death,” said Bradley McCallum, a panelist and the artist behind the exhibition. “It’s about acknowledging his life.”

McCallum said he was inspired to curate the exhibition after receiving a question during a seminar at Columbia University where he taught a seminar on the ethics of representing images. At the end of the seminar, the student asked what happens if a propaganda image goes viral, citing ‘A Message to America,’ the video the IS circulated of Foley’s execution.

“We didn’t have a chance to grapple with the importance of that question in an in-depth and appropriate way at that moment,” McCallum said at the panel. “I went home that night and googled Jim Foley, trying to look for the footage he took as a journalist, and what I found was a flood of images of his execution. It was very difficult to find the actual footage of his work. That felt profoundly wrong.”

The panel and exhibition represented a moral stand against the failure of the media to properly cover warfare in the Middle East, said Amanda Rogers, a panelist and Visiting Assistant Professor of Middle Eastern & Islamic Studies at Colgate University.

“I knew Jim Foley, and how much he would not have wanted to be the story that he has become,” Rogers said.

Rogers’ research centers around videos of the IS executions of journalists. Rogers said during the panel that their virality demonstrates a failure to counter-propaganda designed to stoke anger.

“[IS] had made these men a story and framed them in such a way that a particular audience watching them would cry for more war,” Rogers said. “This isn’t something Jim Foley would have wanted.”

Rogers expanded on her point, adding that strategic framing by the IS can have significant consequences.

“It’s important to understand the way people are being played by the framing of particular deaths … they were framed to incite endless warfare,” Rogers said. “He was a person just like all the nameless massacred citizens of Syria. No matter how much we love Jim, we can’t reduce him to a symbol.”

Jere Van Dyk, a journalist who survived a 45-day stint as a captive of the mujahideen — Muslim guerrilla fighters — spoke on the importance of this project.

“I lived with the mujahideen, disguised, for several months, “ Van Dyk said. “They always kept their word, until they didn’t. I, as a former kidnap victim who survived, feel an obligation and a responsibility to keep Jim’s name alive and what he stands for, what he did, and what he has become.”

Van Dyk met Diane Foley, James’ mother and founder of the James W. Foley Legacy Foundation, at the White House, where other survivors gathered to advise the President on the revision of U.S. hostage policy. He is now a board member of the Foundation and represented the organization in Ms. Foley’s stead.

The organization is dedicated to protecting the rights of journalists, advocating for the release of American hostages and teaching the importance of covering conflict and how to remain safe in the process.

Multiple frames of Foley’s chaotic video footage, compiled into a single image, of a crowd gathering around the body of one of Muammar Gaddafi’s sons that was killed shortly after the conflict in Libya began.

A silkscreen painted by McCallum was draped in front of the composite image which showed a later moment in Foley’s tapes, where the body had been covered in a shroud and paid more respect.

“Each time I’ve seen it, it’s evolved,” Van Dyk said. “To me there’s a warmth to it, but it’s also a world of chaos, this is a world of danger, of death and suffering. So it’s not something I like, but it’s something I really, truly appreciate.”

Former NYU Journalism professor Joscelyn Jurich attended the event for the panel and stayed to view the gallery.

“I’m trying to figure it out,” Jurich said of McCallum’s artwork. “I’m not sure exactly what it is, but it’s almost like a film, a haze over each work and that I find to be provocative and I want to understand it ideologically and artistically, just how its been constructed.”

The exhibition will be open to the public on the second floor of the Puck building through the end of the semester.

“The story of how the images were acquired and the fact that this is Foley’s archive and all the stories that were explained tonight, initially, are more interesting than what I’ve seen of these images, but I also need to spend more time with them,” Jurich said.