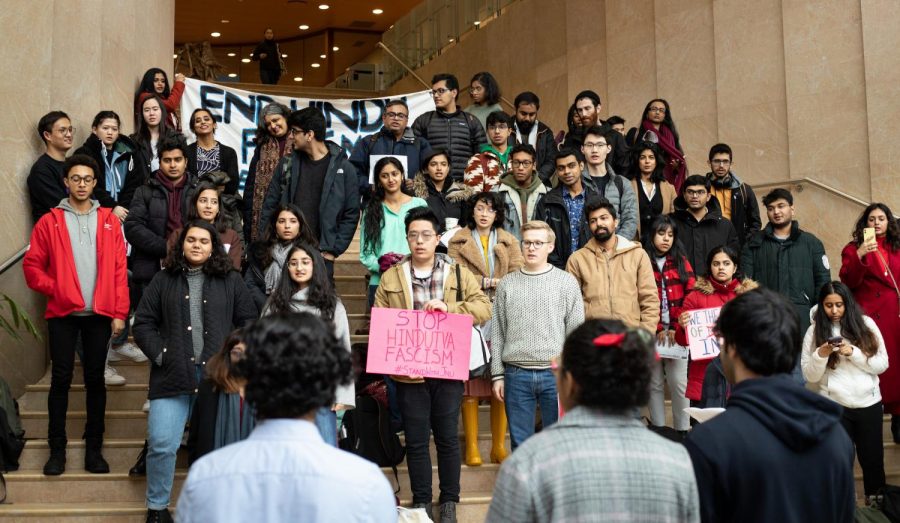 Signs and banners covered the steps at the Kimmel Center. Students stand in solidarity to end Fascism in Hindu communities. (Photo by AJ Nickell)

The crowd held posters and signs condemning Hindutva, which is the defining ideology of the Rashtriya Swayamsevak Sangh, a right-wing Hindu nationalist paramilitary group. Jai Bhim, meaning “Victory to Bhim” in Hindi, refers to B. R. Ambedkar, the author of India’s Constitution. The event was held by NYU’s South Asia Society and called for the elimination of political ideologies governed by religion, such as Hindutva, as India was founded on secular principles.

The RSS has a strong influence within the Bharatiya Janata Party, one of two major political parties in India. It is led by India’s current Prime Minister Narendra Modi, whose administration has been criticized for perpetuating ethnonationalism. The other party is the Indian National Congress. Although the BJP suffered a big loss in the New Delhi election on Wednesday, they show limited signs of slowing down.

“RSS is basically the longest running fascist project in the world,” NYU doctoral student Raghav Singhal said. “It was initially inspired by Hitler and Mussolini. The Hindutva was the first one to espouse the two-nation theory, and what we are seeing today is the culmination of that initial view.”

Last December, the Parliament of India passed the Citizenship Amendment Act, which aimed to fast-track citizenship for most religious groups arriving in India before Dec. 31, 2014 — except for Muslims.

The CAA works with the National Register of Citizens, a registry maintained by the Indian government requiring people to produce ancestry documents to clarify their Indian citizenship.

The CAA and NRC are controversial, as they do not uphold the secular principles of the Indian Constitution and are said to perpetuate Islamophobia. Activists have condemned the Citizenship Amendment Act and as a result have faced brutality from the Indian government for the past three months.

India has a history of Islamophobia, stemming from the partition of British India in 1947 into India and Pakistan, which then split into Pakistan and Bangladesh. The partition was drawn along religious lines: majority Hindus occupied modern day India and majority Muslims occupied Pakistan.

Singhal accused the majority of BJP of promoting right-wing nationalism and using Hinduism as a tool to exclude Muslims.

He added that while NYU students cannot directly get involved in the Indian political affairs from America, actions like this event are necessary to show solidarity and send a message to the BJP.

“That’s the reason why we’re here — because India was born a secular nation,” Singhal said. “It chose to be secular, which is what it should remain as.”

Doctoral student Nisarg Patel agreed with Singhal and expressed that protests need not only be amplified in India but all over the world.

He likened issues brought on by the BJP to those faced by Americans under the Trump administration.

“The disinformation campaign that Trump currently runs in America is similar to what’s going on in India with the BJP,” Patel said.

“It has been 60 days since Muslim women, children and elders began occupying a roadway in Delhi,” Chakraborty said in his speech. “The women of Shaheen Bagh have since become our symbol for resistance against the incumbent fascist Indian regime and have been at the front lines defending the Indian Constitution.”

“I think having an event like this at NYU is important because it’s partly to express solidarity and communicate that from non-resident Indians,” Nangia said. “It contributes to showing that there is international support.”

Ben Johansson, a Swedish exchange student studying engineering at NYU, echoed Nangia’s sentiments about the internationality of the event and the importance of unifying for a common goal: eliminating xenophobia.

“NYC is such an international city, and it engages in international issues,” Johansson said. “As a Swede, I can relate to this activism movement because Sweden currently has the same xenophobia against Muslims. It’s good to be reminded of where those tensions can lead.”

The organizers read the poem “Hum Dekhenge,” which was written in 1979 by Faiz Ahmad Faiz. This was during the peak of tyranny in Pakistan, when former president of Pakistan Muhammad Zia-Ul-Haq declared martial law in the region.

“The title [of the poem] translates to ‘We Shall See,’ and has become a symbol of the victory of democratic power in the face of tyranny,” Sinha said.

The event concluded with a reading of the Preamble of the Indian Constitution, which guarantees rights to every human in India.

“In 1947, British imperialism ended in South Asia,” Chakraborthy said before reading the Preamble. “The Indian nation that emerged believed in a better world. Despite the violence and the horrors of the Partition, it believed in and aspired toward secularism. It believed in being a home for people of all faiths.”