At a town hall for three underrepresented groups at NYU, attendees criticized the university for touting solidarity without taking action. 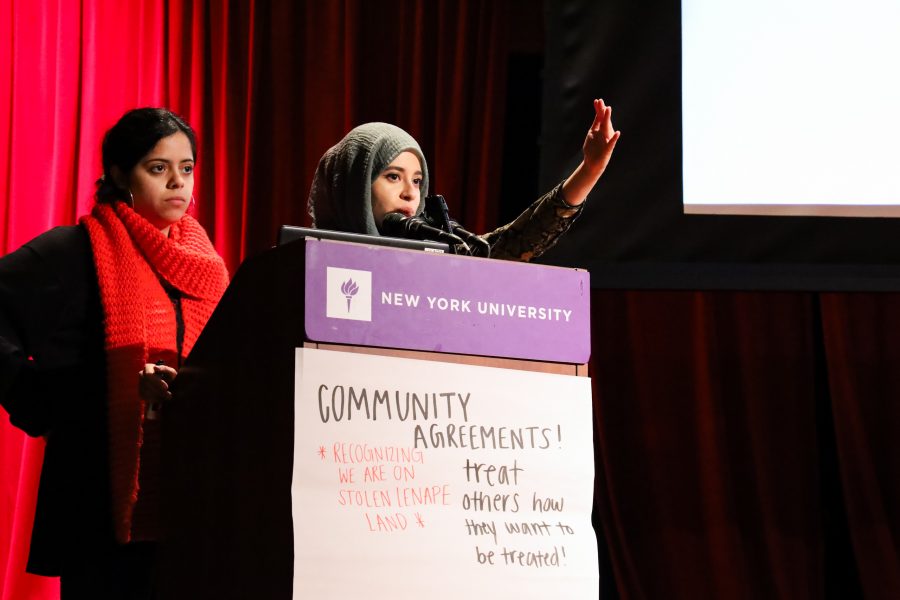 When President Donald Trump rescinded support for children of undocumented immigrants on Sept. 5, 2017, NYU’s president, Andrew Hamilton, was quick to offer support to students who were affected.

“NYU is committed to fully supporting our DACA students […] while you may feel fearful or dismayed today, remember that you are a member of a community that cares about you, a university where you are welcome and respected,” Hamilton said in a statement on the same day. “Do not hesitate to ask for assistance; we are here for you.”

Attendees at a town hall for undocumented, first-generation and low-income students on Thursday said these strong words have not been followed by strong action. Those who attended a town hall for Latine students one day earlier shared a similar sentiment, asking for support in the form of action.

Hosted by UndocNYU and the First-Generation and Low Income Partnership, the town hall featured students who said NYU maintains a facade of supporting students under the Deferred Action for Childhood Arrivals program but fails to take direct action within the university to ensure their representation.

In December 2016, Hamilton declared his support for undocumented students in an email. This October, he signed an amicus brief — along with more than a dozen universities — sent to the U.S. Supreme Court in support of DACA students. These efforts, students at the town hall said, are largely symbolic and fail to amount to positive change in the community.

“You can say you’re supporting undocumented students at NYU but if you are not providing proper financial aid, mental health services and safety training, then the support of undocumented students is called into question,” Senator at-Large and GLS junior Aya Ouda said to 30 attendees at the Eisner and Lubin Auditorium in the Kimmel Center for University Life.

Presenters highlighted two instances of racist graffiti aimed at Latine students found in Bobst Library two years ago which said “Hasta Luego Dreamers.” The graffiti was written in the wake of the Trump administration’s cancelation of DACA. Attendees also discussed U.S. Immigration and Customs Enforcement recruiting at the NYU School of Law Career Fair and interactions with administrators in which they felt unsupported due to their status as undocumented.

UndocNYU presented a previously-written list of concrete ways the university could support students at the town hall. Initially, it asked for a meeting with various administrators, including Hamilton, as well as an Undocumented Student Liaison and a task force to address the issue. On May 13 this year, the group met with some administrators — but its demands have yet to be met.

Students who spoke at the town hall agreed that they do not receive enough support. They spoke about the difficulties of getting on-campus jobs without having an established network and the uncomfortable nature of being a low-income student at a university with many wealthy students.

“It is hard for students who have to work multiple jobs to go up to a professor and tell them they don’t have the time to complete an assignment,” Steinhardt senior and Senator at-Large for Latine students Karen Lemus said. “It is also hard because not many students here can relate to these struggles and it can be excluding.”

Assistant Director for the Center for Student Life Eena Singh and Assistant Vice President for Inclusive Global Student Leadership and Engagement Leah Lattimore also attended the town hall. They both stressed the importance of these town halls in aiding administrators’ understanding of student concerns.

“These events are helpful in us understanding how we can better support these groups of students,” Lattimore told WSN. “It is very difficult to be able to determine what resources are most necessary. We are just trying our best to curate proper programs that will actually be useful.”

Chair of La Herencia Latina and Gallatin senior Rosa Baez said she especially appreciated the intersectional nature of the event.

“This event is great because undocumented, first-generation and low-income students often fall together and we want to show our solidarity in our struggles,” Baez told WSN. “We are all underrepresented at NYU and to come together to make a bigger voice is what we are all here for.”

A version of this article appeared in the Monday, Nov. 18, 2019 print edition. Email Mina Mohammadi at [email protected]